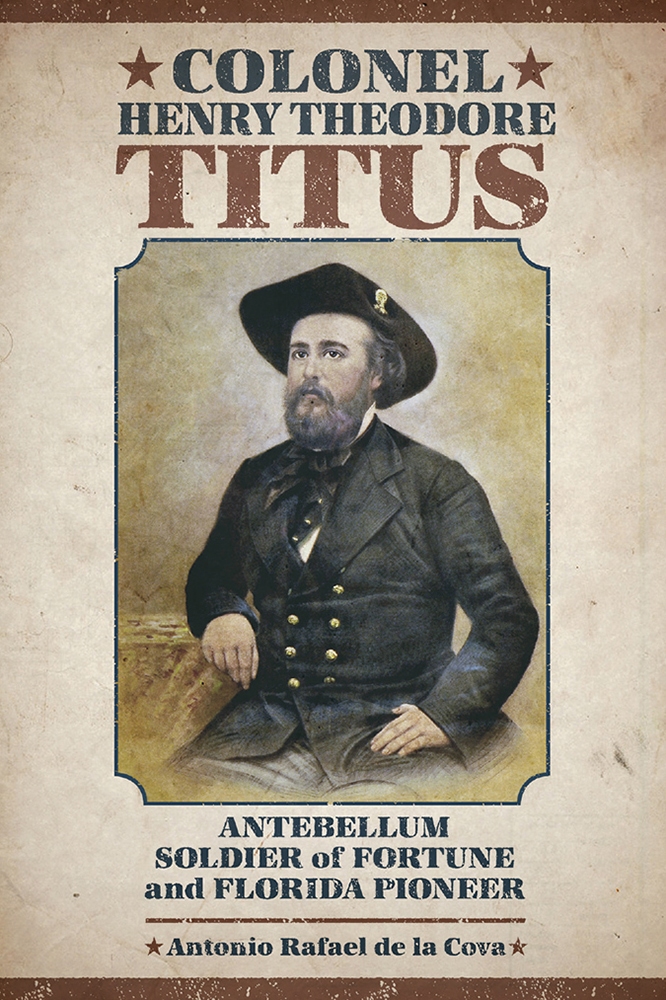 Henry Theodore Titus (1822-1881) was the quintessential adventurer, soldier of fortune, and small-time entrepreneur, a man for whom any frontier—geographical, cultural, social—was an opportunity for advancement. Although born in Trenton, New Jersey, and raised in New York and Pennsylvania, Titus bore no allegiance to his native soil or the Yankee values of his ancestors. In the 1850s he became a staunch defender of southern slavery, United States expansionism into the Caribbean Basin, and ultimately the Confederacy's war of disunion. In Colonel Henry Theodore Titus, the first full-length biography of Titus, Antonio Rafael de la Cova reveals a man whose life and adventures offer glimpses into nineteenth-century America not often examined; these indicate the extent to which personal and collective violence, racial prejudice, and moral ambiguities shaped the country at the time.

Belligerent, intemperate, egomaniacal, and of imposing stature, Titus was the bête noire of the abolitionist press. Despite his northern roots, he became a caricature of the southern braggart and frontier opportunist. National newspapers followed his reckless exploits during most of his adult life. Titus fought brawls in the saloons of luxury hotels and narrowly escaped the hangman's noose as a Border Ruffian leader in Bleeding Kansas, a Nicaraguan firing squad as a filibuster, and death in a Comanche ambush in Texas. He nearly prompted an international incident between the United States and Great Britain when he was arrested in Nicaragua for threatening to shoot a British naval officer and disparaging the queen of England. The colonel was jailed in New York City for disorderly conduct and trying "to organize the desperate classes for a riot."

During his lifetime Titus held more than a dozen occupations, including sawmill owner, postal inspector, soldier of fortune, grocer, planing mill salesman, farmer, slave overseer, turtler, bartender, land speculator, and hotel keeper. He pursued silver mining in the Gadsden Purchase portion of the Arizona Territory where his brother was killed and their hacienda destroyed by Apaches. Despite his violent character and his pro-Confederate values, Titus was politically savvy. He did not take up arms during the Civil War. After a brief stint as assistant quartermaster in the Florida militia, he returned to civilian life and sold foodstuffs and slave labor to the Confederacy. Florida Reconstruction governors later appointed him as notary public and justice of the peace.

Rheumatism and gout kept Titus bound to a wheelchair during the last few years of his life when he became an avid civic leader. His greatest legacy was ironically his most benign. Borrowing today's equivalent income value sum of half a million dollars, he established a grocery store and a sawmill in a hardscrabble Florida frontier settlement that became the city of Titusville, the county seat of Brevard County and tourist gateway to Cape Canaveral and the Kennedy Space Center.


A native of Havana, Antonio Rafael de la Cova teaches history, African American studies, and Latin American anthropology at the University of South Carolina Columbia. He holds a Ph.D. in history from West Virginia University and is the author of two books published by the University of South Carolina Press, Cuban Confederate Colonel: The Life of Ambrosio José Gonzales and The Moncada Attack: Birth of the Cuban Revolution, and numerous essays on nineteenth-century military filibusters.

"Colonel Henry Theodore Titus: Antebellum Soldier of Fortune and Florida Pioneer, the latest work from Antonio Rafael de la Cova, provides an in-depth look into a number of important topics in American history while covering the life of the colorful and controversial Henry Theodore Titus, the nameksake of Titusville, Florida."—The Journal of Southern History

"In all, La Cova's biography of Henry Theodore Titus is a thoroughly researched work that paints a fascinating story of a relatively unknown figure in ninteenth-century American history. Historians, graduate students, and amateur history buffs alike will no doubt be intrigued and entertained by Titus's exploits and personality."—H-Net Reviews: H-War

"Antonio Rafael de la Cova's wonderful biography of Titus recovers the story of a quintessential military irregular and entrepreneur during 'Manifest Destiny's heyday in America. Students of antebellum U.S. interventions in Latin America, 'Bleeding Kansas,' and Florida's history will especially benefit from this engrossing portrait of a reckless, highly flawed, foul-mouthed but insistently newsworthy figure who, despite his northern birth, came to personify the Southern martial tradition."—Robert E. May, Professor Emeritus of History, Purdue University

"this intriguing account of a complex and troubling figure successfully sheds lights on the antebellum and postbellum United States."—Kansas History: A Journal of the Central Plains