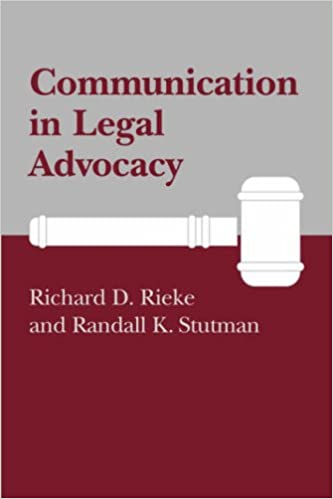 The first book in a new series—Studies in Communication Processes—this is a research-based, practical analysis of communication processes in trials. Besides the traditional perception of trials as scientific fact-finding proceedings, the authors look at trials as social-scientific phenomena. Responding to the emerging interest in alternative dispute resolution, the book examines the ways in which negotiation, mediation, and arbitration interrelate with trials. The authors combine traditional argumentative analyses (such as presumption and burden-of-proof) with contemporary ideas about narrative rationality.

Social science research is used to expand the understanding of such traditional concepts as procedural fairness, the credibility of witnesses as sources of knowledge, and procedures such as jury selection, opening and closing statements, witness examination, and jury deliberation. Readers looking for a practical and strategic guide to effective trial advocacy, theoretical insights into trials as socially sanctioned mechanisms for dispute resolution, and a study of applied argumentation within the specialized field of law will find this book extremely beneficial.

Richard D. Rieke has been a student of communication and law since his doctoral work at Ohio State University in 1964. His dissertation "Rhetorical Theory in American Legal Pracice" was one of the first studies to argue for a rapprochement between legal theory and rhetorical theory in relation to the practical processes of conducting trials and appeals. Since then, as a member of the faculty at Ohio State and later the University of Utah, he has continued to study trials, appellate advocacy and appellate decision making from the perspective of rhetorical/communication theory. He is currently involved with the Utah State Bar and the American Arbitration Association in making dispute resolution more accessible to citizens of Utah.