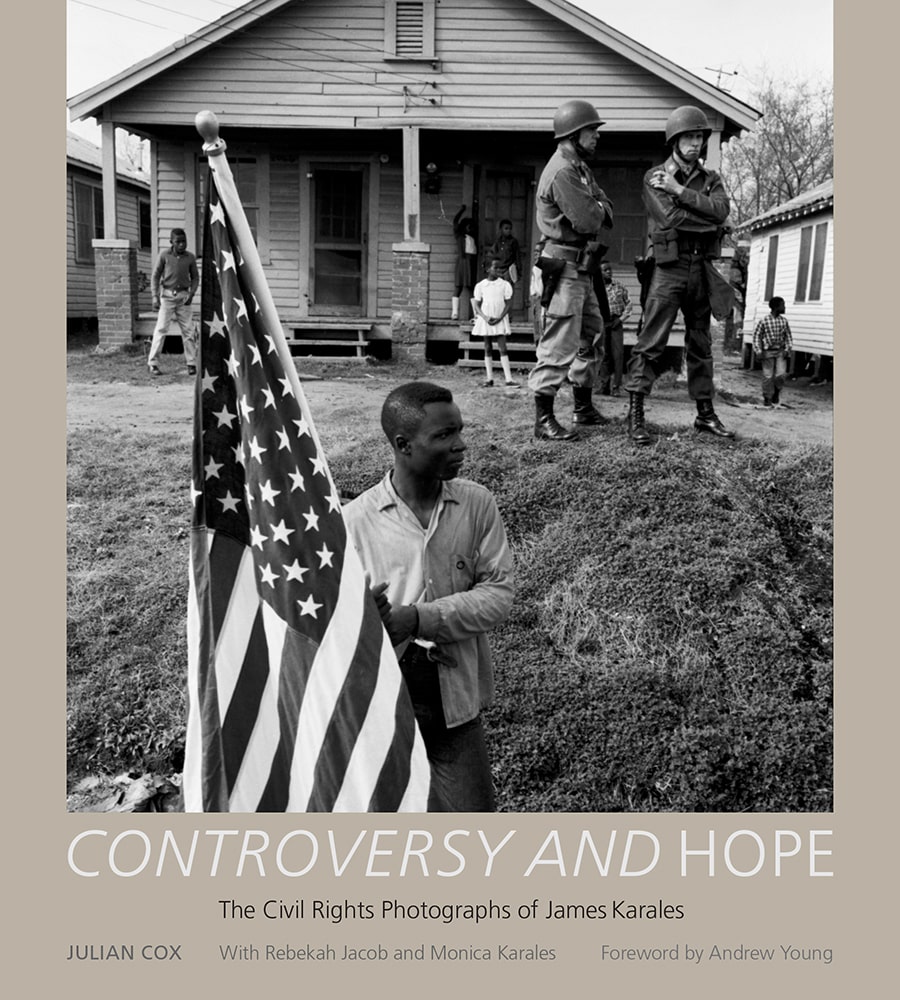 Controversy and Hope commemorates the civil rights legacy of James Karales (1930-2002), a professional photojournalist who documented the 1965 Selma to Montgomery March for Voting Rights with a dedication and vision that led the New York Times to deem his work "a pictorial anthem of the civil rights movement."

Equipped with ambition and a B.F.A. in photography from Ohio University in 1955, Karales headed to New York and found work as a darkroom assistant to master photographer W. Eugene Smith. Karales's earliest photo-essays had already come to the attention of Edward Steichen, curator of photography at the Museum of Modern Art in New York, which acquired two of Karales's photographs from his series on the Greek American community of Canton, Ohio. Another early photo-essay, on the integrated mining community of Rendville, Ohio, was featured in Karales's first solo exhibition, held in 1958 at Helen Gee's Limelight gallery in Greenwich Village. From 1960 to 1971, Karales worked as a staff photographer for Look magazine, traveling the world during a time of dynamic social change and recording the harsh realities he witnessed at home and abroad.

By the time Karales documented the fifty-four-mile voting-rights march from Selma to Montgomery, Alabama, in 1965 he had already developed a strong relationship with its most prominent leader, Dr. Martin Luther King Jr., and had been granted unprecedented access to the King family. That connection translated into a powerful empathy in the photographs that still resonates for viewers today.

The Village Voice described Karales's civil rights work as bearing "the weight of history and the grace of art." Controversy and Hope presents many of Karales's images from the era, including some photographs published here for the first time. Julian Cox, with the assistance of Rebekah Jacob and Monica Karales, has selected a bold representation of Karales's photographs, augmenting his visual legacy with biographical information and personal recollections. Civil rights leader Andrew Young, who appears in some of Karales's photographs, has provided a foreword to the volume.


Julian Cox is the founding curator of photography and chief curator for the Fine Arts Museums of San Francisco. For more than a decade Cox worked with the photographs collection at the J. Paul Getty Museum in Los Angeles and then spent five years leading the photography program at Atlanta's High Museum of Art. His previous books include Julia Margaret Cameron: The Complete Photographs; Harry Callahan: Eleanor; Road to Freedom: Photographs of the Civil Rights Movement, 1956–1968; and The Portrait Unbound: Photographs by Robert Weingarten.

Rebekah Jacob is the proprietor of the Rebekah Jacob Gallery in Charleston, South Carolina. She is an expert on the art and photography of the American South and represents a number of eminent Southern artists. Jacob holds undergraduate and graduate degrees from the University of Mississippi and a certificate in appraisal studies in fine and decorative arts from New York University. She is also a certified member of the Appraisers Association of America.

Monica Karales is the widow of James Karales. She was born in Switzerland and raised in Lenzerheide-Valbella, in a picturesque valley in the Swiss Alps. Trained in the visual arts, she met and married James Karales in 1973 and was his constant companion until she was widowed in 2002. Karales has since dedicated herself to preserving her late husband's archive and ensuring that his legacy survives in the form of exhibitions and scholarly publications.

"What makes Karales's photos stand out is his ability to find the emotional core and humanity in the images, whether they are of seemingly ordinary activities, of tense moments fraught with danger, or of famous figures such as Dr. Martin Luther King Jr. and his family, to whom Karales had unparalleled access as a photographer. Cox provides a thorough chronicle of Karales's personal life, education, career, and involvement in the civil rights movement. The text is followed by 92 of his photographs, most from the march to Montgomery, that record a crucial period in the civil rights movement. Recommended for anyone interested in photojournalism and modern American history."—Library Journal

"The photographs in this book tell a story of life in the impoverished south and the behind the scenes of the civil rights movement more than it talks about the actual civil rights protests and marches."—Cathy Ikeda, NetGalley

"His most famous shots retain their potency: a line of marchers below a gathering storm cloud; a man partially shaded by the U.S. flag that drapes him; a white amputee crutching the route with determination. There is a remarkable intimacy and spontaneity to Karales's photographs."—Publishers Weekly, April 2013

"The visually powerful images in Controversy and Hope reveal a formerly unseen glimpse into the 1965 Selma to Montgomery March for Voting Rights, Dr. Martin Luther King, Jr., and other civil rights events like no other book I have read. Although our paths never crossed, James Karales' insider access and composition—much like my own—captures many crucial moments of social change with artistic flair and sensitivity."—Cecil Williams, author of Orangeburg 1968: A Place and Time Remembered, Out-of-the-Box in Dixie: Cecil William's Photography of the South Carolina Events that Changed America, and Unforgettable: All the Memories We Left Behind

"These photographs by James Karales evoke the power of Walker Evans. Here are rare discoveries mixed with iconic images of U.S. history. Karales was a master. No artist captured more drama, character, and inspiration from the civil rights era."—Taylor Branch, author of Parting the Waters and The King Years

"I don't know why James Karales had the sensitivity to capture the power and the humanity of our movement. Perhaps it was a sensibility derived from his life as the child of immigrants. Perhaps it was his immersion in the integrated coal-mining community of Rendville, Ohio. Somehow he was not blinded by the color consciousness that was the hallmark of the segregated way of life we were challenging. Through the lens of his camera, Karales recorded the humanity of a people struggling to be free and conveyed that reality to the nation."—Andrew Young, from the foreword