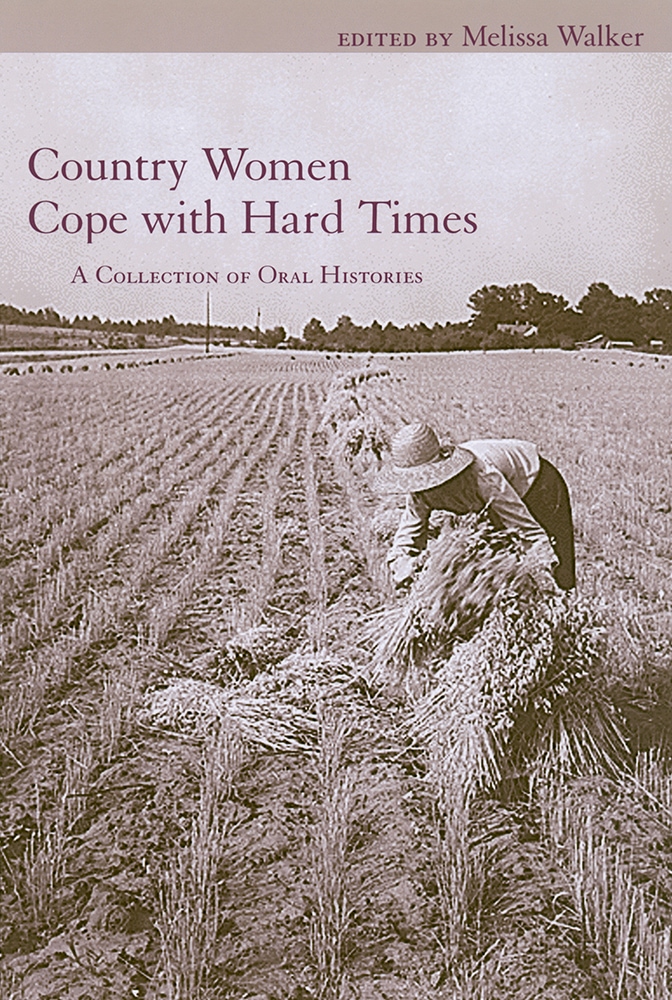 A Collection of Oral Histories

edited by Melissa A. Walker

"It was hard times," French Carpenter Clark recalls, a sentiment unanimously echoed by the sixteen other women who talk about their lives in Country Women Cope with Hard Times. Born between 1890 and 1940 in eastern Tennessee and western South Carolina, these women grew up on farms, in labor camps, and in remote towns during an era when the region's agricultural system changed dramatically. As daughters and wives, they milked cows, raised livestock, planted and harvested crops, worked in textile mills, sold butter and eggs, preserved food, made cloth, sewed clothes, and practiced remarkable resourcefulness. Their recollections paint a vivid picture of rural life in the first half of the twentieth century for a class of women underrepresented in historical accounts.

Through her edited interviews with these women, Melissa Walker provides firsthand descriptions of the influence of modernization on ordinary people struggling through the agricultural depression of the 1920s and 1930s and its aftermath. Their oral histories make plain the challenges such women faced and the self-sacrificing ways they found to confront hardship. While the women detail the difficulties of their existence—the drought years, early freezes, low crop prices, and tenant farming—they also recall the good times and the neighborly assistance of well-developed mutual aid networks, of which women were the primary participants.

Melissa Walker is the George Dean Johnson Jr. Professor of History at Converse College in Spartanburg, South Carolina, where she has been the recipient of the O'Herron Award for Faculty Excellence and the Kathryne Amelia Brown Award for Outstanding Teaching. In 2007 she was named the Carnegie Foundation for Teaching/CASE South Carolina Professor of the year. President of the Agricultural History Society and past president of the Southern Association for Women Historians (SAWH), Walker is also the author of Southern Farmers and Their Stories and All We Knew Was to Farm: Rural Women in the Upcountry South, 1919–1941, winner of the SAWH Willie Lee Rose Prize.

"This book chronicles a history that has until now often been confined to the oral traditions of family life, passed from grandmother to child, escaping the notice of outsiders."—Women's Review of Books

"This book is a goldmine of information about country women who have left few or no written records, and were otherwise socially marginalized, and it stands as a permanent record of a past way of life."—Rural History

"In vivid, compelling accounts, women tell how they cared for their families, sought educational opportunities for their children, celebrated holidays and assisted neighbors through mutual aid networks. . . . A wonderful collection for historians and scholars interested in what southern rural women have to say about their lives in the early twentieth century."—Labor History

"ll of the stories in Country Women Cope with Hard Times are wonderful windows to the past"—Charleston (S.C.) Post & Courier

"A model for the practice of oral history."—South Carolina Historical Magazine