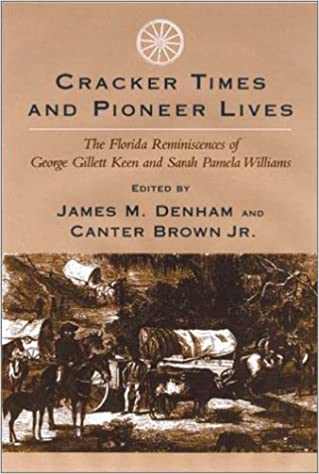 Cracker Times and Pioneer Lives brings together the reminiscences of two pioneers who came of age in antebellum Florida's Columbia County and the nearby Suwannee River Valley. Though they held markedly different positions in society, they shared the adventure, thrill, hardship, and tragedy that characterized Florida's pioneer era. With sensitivity, poignancy, and humor, George Gillett Keen and Sarah Pamela Williams record anecdotes and memories that touch upon important themes of frontier life and reveal the remarkable diversity of Florida's settlers.

Keen's story typifies that of many "Cracker" families. Born in Georgia, he moved with his parents to the Florida Territory in 1830 in search of a better life. He grew up in a dangerous yet exciting setting, and as an old man at the turn of the twentieth century recorded his colorful memories with a verve and vernacular reminiscent of the Georgia humorist, Augustus Baldwin Longstreet. Keen writes about subsistence farming, cattle grazing, the Seminole wars, marriage customs, medical practices, politics, the abundance of wildlife, and the paucity of educational opportunities.

Admittedly not a Cracker, Sarah Pamela Williams was the daughter of a nationally recognized man of letters. In 1847 she moved to Columbia County's seat of Alligator (Lake City) and later married into one of northeast Florida's prominent planter families. She recorder her recollections of a life brightened by social functions, travel, and cultural endeavors. Offering a rare glimpse into Florida's Civil War homefront, Williams tells of making clothes of homespun, tithing crops to the Confederacy, fearing hostilities just thirteen miles from her home, and surviving as a widow in the lean postwar era.

Cracker Times and Pioneer Lives features biographical sketches of more than 280 persons mentioned by Keen and Williams in their writings, many of whom subsequently pioneered settlement in the Florida peninsula.


James M. Denham is a professor of history at Florida Southern College, where he also directs the Center for Florida History. Before joining the faculty at FSC, he held teaching positions at Georgia Southern University, Limestone College, and Florida State University, where he received a Ph.D. in 1988. Denham lives in Lakeland.

Canter Brown, Jr. is a visiting professor of history at Florida A & M University and holds J.D. and Ph.D. degrees from Florida State University. A native of Fort Meade, Polk County, Florida, he now resides in Tallahassee.

"A must-own—a must-read—book. It opens a wide window to the nineteenth-century Florida frontier that was sometimes treacherous, sometimes peaceful, but always action-packed. These are wonderful memories of a long ago time that James M. Denham and Canter Brown, Jr., are making available to us. What a treasure."—Samuel Proctor, University of Florida

"A meticulously researched body of work that will serve as an invaluable source of information for historians for decades to come."—Florida Historical Quarterly

"There is a nearly fifty page name-cited index for the people named in both recollections. This alone makes the book a treasure trove for both historians and genealogists."—Reviewers Consortium

"Denham and Brown—both respected experts in pioneer Florida history—carefully footnote Keen's stories, pointing out confirming evidence to substantiate or clarify his version of events Genealogy enthusiasts will find the book's appendix helpful and fascinating, showing how these families are related and the roles they played in the development of the state. In doing so, Denham and Brown practice the best kind of history - that which helps us make a personal, meaningful connection between the past and present"—Orlando Sentinel

"This volume is an example of what skilled editing can tease out of limited sources. Denham and Brown have added a solid contribution to the growing literature on frontier Florida"—Journal of Southern History

"If you've ever wondered what Florida was like before the sprawl of interstate highways, shopping malls and fast-food restaurants, this book will lead you through the eyes of two inhabitants in the late 19th century into that old swampy territory after the Civil War."—Florida Today

"A valuable addition to the scholarship on Southern society and the nineteenth-century frontier. Our understanding of the everyday people of the Florida of yesterday is expanded substantially."—H-Net Book Reviews