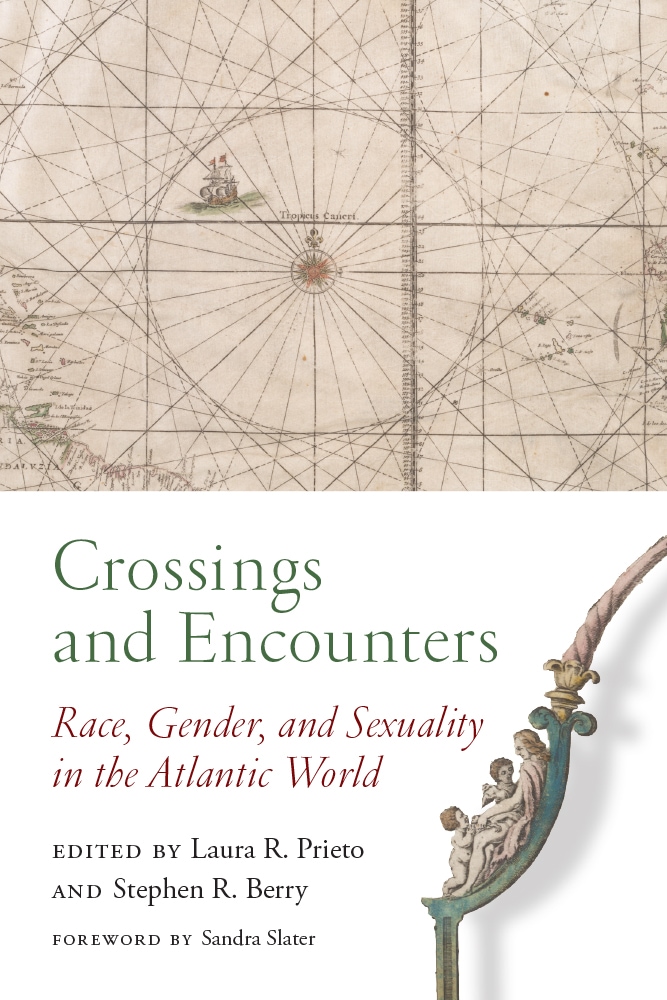 Race, Gender, and Sexuality in the Atlantic World

A collection of essays detailing how individuals remapped race, gender, and sexuality through their lived experiences and in the cultural imagination

For centuries the Atlantic world has been a site of encounter and exchange, a rich point of transit where one could remake one's identity or find it transformed. Through this interdisciplinary collection of essays, Laura R. Prieto and Stephen R. Berry offer vivid new accounts of how individuals remapped race, gender, and sexuality through their lived experience and in the cultural imagination. Crossings and Encounters is the first single volume to address these three intersecting categories across the Atlantic world and beyond the colonial period.

The Atlantic world offered novel possibilities to and exposed vulnerabilities of many kinds of people, from travelers to urban dwellers, native Americans to refugees. European colonial officials tried to regulate relationships and impose rigid ideologies of gender, while perceived distinctions of culture, religion, and ethnicity gradually calcified into modern concepts of race. Amid the instabilities of colonial settlement and slave societies, people formed cross-racial sexual relationships, marriages, families, and households. These not only afforded some women and men with opportunities to achieve stability; they also furnished ways to redefine one's status.

Crossings and Encounters spans broadly from early contact zones in the seventeenth-century Americas to the postcolonial present, and it covers the full range of the Atlantic world, including the Caribbean, North America, and Latin America. The essays examine the historical intersections between race and gender to illuminate the fluid identities and the dynamic communities of the Atlantic world.


Laura R. Prieto is the Alumni Chair in Public Humanities and professor of history and of women's and gender studies at Simmons University. She is the author of At Home in the Studio: The Professionalization of Women Artists in the United States.

Stephen R. Berry is an associate professor of history at Simmons University and the author of A Path in the Mighty Waters: Shipboard Life and Atlantic Crossings.

"From Dutch colonists in New Amsterdam and Cyptro-Jews in Mexico to the migration of free women of color from Haiti and the establishment of Afro-Brazilian fraternal organizations after abolition, Crossings and Encounters offers an excellent transnational look at interactions of race, gender, and sexuality, as people and ideas crisscrossed the Atlantic in the early modern and modern world."—James N. Green, Brown University

"A marvelous collection of essays that illuminates how the Atlantic World, with its transnational exchanges and encounters, has shaped modern ideas about race, gender, and sexuality."—Catherine Brekus, Harvard University

"This impressive set of essays demonstrates the ways ordinary people have asserted themselves while moving across, around and through Atlantic spaces for five centuries. Readers will appreciate how individual experiences illuminate broader patterns in the shaping of new gendered, sexual and racial identities."—Jon Sensbach, University of Florida

"[O]ffers a unique insight into the contestation and transformation of race, gender, and sexuality in a bound setting characterized by (usually forced) cultural interactions. . . . [P]rovides a lens through which modern issues of race, gender, and sexuality can be explored, revealing early instances that have shaped the interactions and transactions of inhabitants of the Atlantic world."—New York History