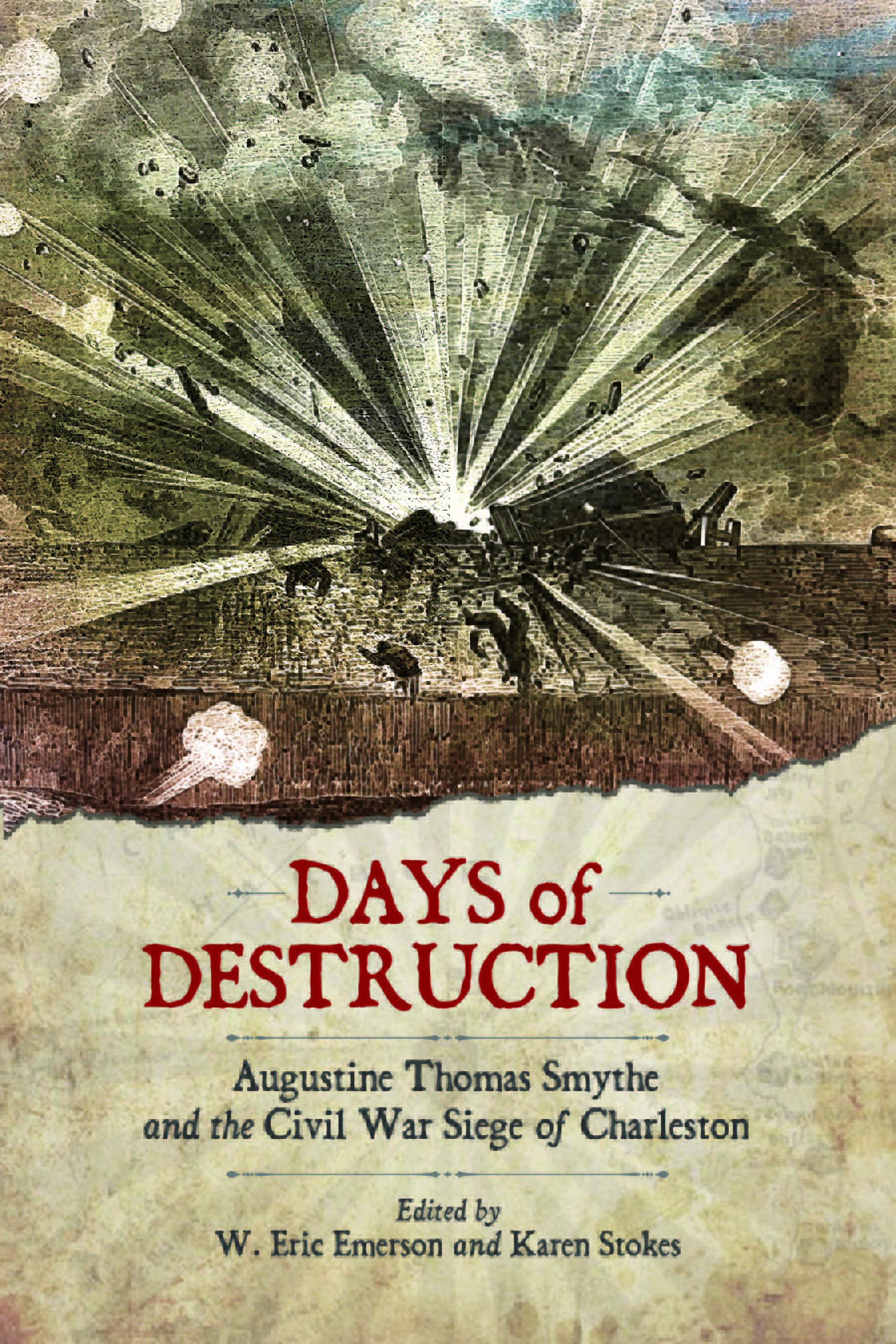 Augustine Thomas Smythe and the Civil War Siege of Charleston

One soldier's eloquent, descriptive letters to his family offering a personal view of the devastating assault

In Days of Destruction, editors W. Eric Emerson and Karen Stokes chronicle the events of the siege of Charleston, South Carolina, through a collection of letters written by Augustine Thomas Smythe, a well-educated young man from a prominent Charleston family. The vivid, eloquent letters he wrote to his family depict all that he saw and experienced during the long, destructive assault on the Holy City and describe in detail the damage done to Charleston's houses, churches, and other buildings in the desolated shell district, as well as the toll on human life.

Smythe's role in the Civil War was different from that of his many companions serving in Virginia and undoubtedly different from anything he could have imagined when the war began. Aftera baptism in blood at the Battle of Secessionville, South Carolina, Smythe was assigned to the Confederate Signal Corps. He served on the ironclad CSS Palmetto State and then occupied a post high above Charleston in the steeple of St. Michael's Episcopal Church. From behind a telescope in his lofty perch, he observed the fierce attacks on Fort Sumter, the effects of the unrelenting shelling of the city by enemy guns at Morris Island, and the naval battles and operations in the harbor, including the actions of the Confederate torpedo boats and the H. L. Hunley submarine.

The Confederate Signal Corps played a vital role in the defense of Charleston and its environs, and Smythe's letters, perhaps more than any other first-person account, detail the daily life and service experiencesof signalmen in and around the city during the war. For more than eighteen months, Smythe's neighborhood south of Broad Street, one of the city's oldest and wealthiest communities, was abandoned by the great majority of its residents. His letters provide the reader with an almost postapocalyptic perspective of the oftentimes quiet, and frequently lawless, street where he lived before and during the siege of Charleston.

"This unrelenting land and sea campaign was witnessed by Augustine Thomas Smythe, a native son serving in the Confederate Signal Corps. His letters contain many prescient observations on the devastating effects of siege warfare on the city, as well as describing his daily life and duties as a signal man."—Civil War Times

"The editors of Days of Destruction have scored a touchdown! I have read a ton of published collections of Civil War letters and this is one of the best ever. I am amazed that it is just now being brought to attention. Augustine T. Smythe was present during most of the 567-day bombardment and siege of Charleston, a major episode in world military history. As a signalman he moved frequently all over the area, on land and water, and experienced and witnessed more than any soldier and most officers. More importantly, he was a literate man who held nothing back, but wrote his folks vividly and fully about what was going on during this great event."—Clyde N. Wilson, Emeritus Distinguished Professor of History, University of South Carolina

"If you have never spent time studying the Charleston theater of the War because it seems a bit mundane, you err and are missing some of the most exciting, critical, and consequential actions of the War. This laudable new addition to the history of the unrelenting and ruthless campaign for the heartbeat of the Confederacy gives wonderful, first-hand details of the events as experienced by a soldier who was there though it all, with his especial information about the bombardment of the city and its innocent civilians. It is a must for those who want to know more as well as those who have read it all."—Herbert Bing Chambers, author of And Were the Glory of Their Times: Men Who Died for South Carolina in the War for Southern Independence

"a well-edited compilation of wartime correspondence that gives insight into a military and a city caught in a cataclysmic struggle for survival. It belongs on the book shelves of all Civil War historians."—Journal of Southern History

"A valuable read for anyone interested operations around Charleston and the Home Front, and for its brief look at the very neglected Confederate Signal Corps."—New York Military Affairs Symposium Review

"Emerson and Stokes' Days of Destruction puts a human face on the devastation wrought by Southern fire-eaters."—Civil War News