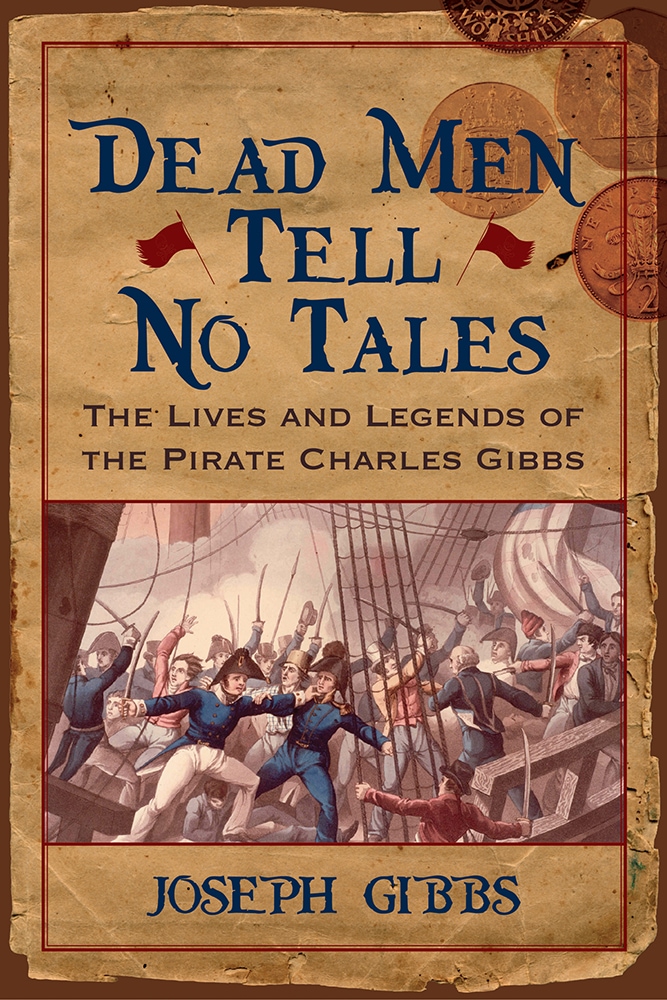 The Life and Legends of the Pirate Charles Gibbs

A chronicle of murders, mutiny, and mayhem carried out by a real pirate of the Caribbean

Dead men tell no tales, or so the pirate maxim goes. But shortly before execution for mutiny and murder in 1831, the enigmatic pirate Charles Gibbs recounted the infamous crimes of his harrowing life at sea in a self-aggrandizing series of "confessions." Wildly popular reading among nineteenth-century audiences, such criminal confessions were peppered with the romanticized mythology that informs pirate lore to this day. Author Joseph Gibbs takes up the task of separating fact from fiction to explicate the true story of Charles Gibbs—an alias for James Jeffers (1798-1831) of Newport, Rhode Island—in an investigation that reveals a life as riveting as the legend it replaces.

Jeffers was the child of a Revolutionary War privateer captain with his own history of "rough work." Following his father into the privateer trade on behalf of Latin American insurgents, he soon turned to outright piracy, sailing from Cuban ports to wreak havoc in the Caribbean and Gulf of Mexico aboard a series of commandeered schooners. Along the way, he admittedly had a hand in the taking of dozens of ships and hundreds of lives.

Stripping away 170 years of embellishment, Joseph Gibbs maps the still shockingly violent saga of James Jeffers across the seas and in the process challenges and discredits much of the pirate's mythology. He dismisses, for example, Jeffers' claims of War of 1812 heroism, and shows how his confessions were augmented and distorted by generations of writers fascinated by the man's story.

The author also recounts Jeffers's well-documented role in the infamous mutiny and murders in 1830 aboard the brig Vineyard while the vessel was carrying a load of Mexican silver. Arrested within days of setting foot on the New York shore, the case against Jeffers and accomplice Thomas Wansley culminated in a sensational trial which ended in their subsequent executions by hanging on Ellis Island.

In addition to recounting the life of a ruthless pirate, Dead Men Tell No Tales reconstructs the larger story of American piracy and privateering in the early nineteenth century and illustrates the role of American and European adventurers in the Latin American wars of liberation. Carefully researched, engagingly written, this book is pirate history at its most credible and readable.


Formerly a reporter and editor on several Massachusetts newspapers, Joseph Gibbs holds a doctorate in policy and communication from Boston University. The author of Gorbachev's Glasnost and Three Years in the Bloody Eleventh, he is a professor of mass communication at the American University of Sharjah, United Arab Emirates.

"In this chilling chronicle of the blood-soaked career of the pirate Charles Gibbs we are treated to a classic true crime story, full of the color and horror of its era."—John Douglas, author of Mindhunter, a New York Times #1 best-seller

"Dead Men Tell No Tales is a fascinating look into the life and times of a true buccaneer."—Sean Naylor, author of Not a Good Day to Die: The Untold Story of Operation Anaconda

"Dead Men Tell No Tales takes readers into the lives of a murderous pirate who became known as Charles Gibbs. By separating facts from the fictions left in Gibbs's self-lionizing 'confessions,' the author presents us with a reconstituted biographical sketch of a complex criminal and a deft exploration into the history of piracy and privateering during the Latin American wars of liberation. Expertly researched and organized, this well-paced narrative invites both scholarly and general readers into a dangerous world not previously imagined."—John Frayler, park historian, Salem Maritime National Historical Site, Salem, Massachusett