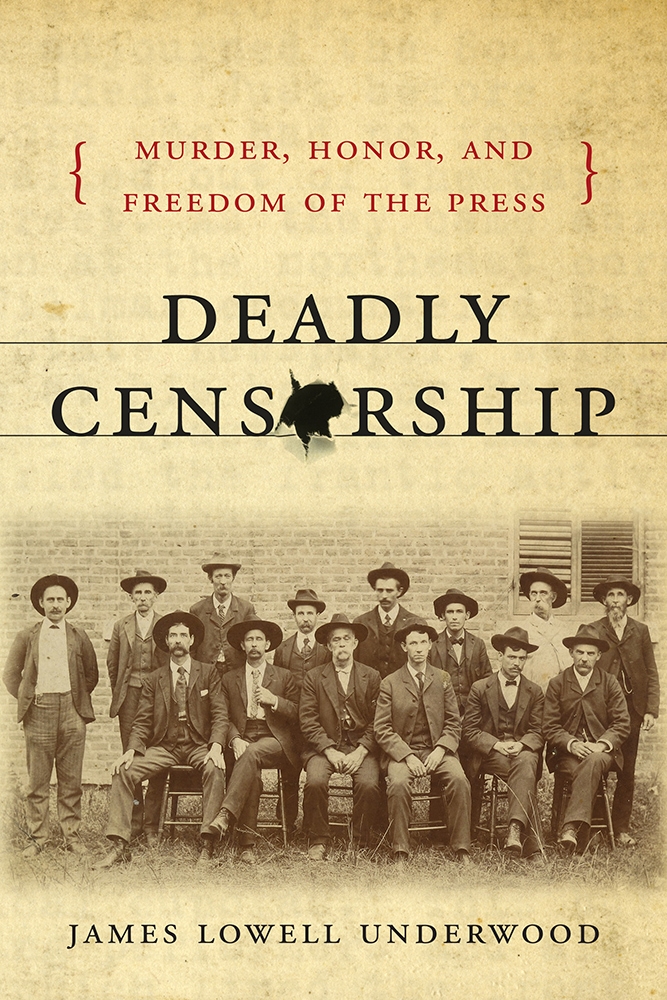 Murder, Honor, and Freedom of the Press

On January 15, 1903, South Carolina lieutenant governor James H. Tillman shot and killed Narciso G. Gonzales, editor of South Carolina's most powerful newspaper, the State. Blaming Gonzales's stinging editorials for his loss of the 1902 gubernatorial race, Tillman shot Gonzales to avenge the defeat and redeem his "honor" and his reputation as a man who took bold, masculine action in the face of an insult.

James Lowell Underwood investigates the epic murder trial of Tillman to test whether biting editorials were a legitimate exercise of freedom of the press or an abuse that justified killing when camouflaged as self-defense. This clash—between the revered values of respect for human life and freedom of expression on the one hand and deeply engrained ideas about honor on the other—took place amid legal maneuvering and political posturing worthy of a major motion picture. One of the most innovative elements of Deadly Censorship is Underwood's examination of homicide as a deterrent to public censure. He asks the question, "Can a man get away with murdering a political opponent?" Deadly Censorship is courtroom drama and a true story.

Underwood offers a painstaking re-creation of an act of violence in front of the State House, the subsequent trial, and Tillman's acquittal, which sent shock waves across the United States. A specialist on constitutional law, Underwood has written the definitive examination of the court proceedings, the state's complicated homicide laws, and the violent cult of personal honor that had undergirded South Carolina society since the colonial era.

"Deadly Censorship does make a valuable contribution to understanding the climate in which the press operated in the nineteenth and early twentieth centuries."—American Periodicals

"This excellent book will appeal to anyone interested in legal history of the Gilded Age and Progressive Era, freedom of speech, and the relationship between violence and politics. It will certainly prove useful in upper-division undergraduate classes and graduate seminars."—H-Net Reviews

"James Lowell Underwood writes with the clarity of a great teacher, the objectivity of a fine journalist and the deftness of a seasoned legal mind. South Carolinians have much to learn about themselves in this early 20th century story of murder, politics, jurisprudence and the relevance of knowing the truth."—John P. Linton, J.D., Duffy and Young, LLC

"Since the 1920s, the United States has had dozens of sensational trials—all of which have been labeled 'the trial of the century.' There is no question had the trial of Lieutenant Governor James Tillman for the murder of N. G. Gonzales, the editor of the State newspaper, occurred in our time that it would have had the same appellation. James Underwood's riveting account of this infamous South Carolina trial is as gripping as any contemporary courtroom drama."—Walter Edgar, author of South Carolina: A History

"Deadly Censorship is an insightful and in-depth look at the assassination of Columbia newspaper editor N.G. Gonzales by South Carolina Lt. Gov. James H. Tillman in 1903. Jim Underwood's carefully researched work not only reports on the killing and ensuing trial, it explains the forces that created a society where it was acceptable to kill a man to silence his pen."—Jay Bender, Reid H. Montgomery Freedom of Information Chair, University of South Carolina

"The killing of newspaper editor Narcissus Gonzalez by Lieutenant Governor James H. Tillman is a story that has needed telling for over 100 years. Finally, Jim Underwood has unraveled the killing, the murder trial, and the aftermath and through his narrative tells a story of unfettered freedom of the press versus hot-bloodied Southern manhood honor. Without question, Deadly Censorship is a remarkable, eloquent, and important book."—W. Lewis Burke, Director of Clinical Legal Studies, School of Law, University of South Carolina