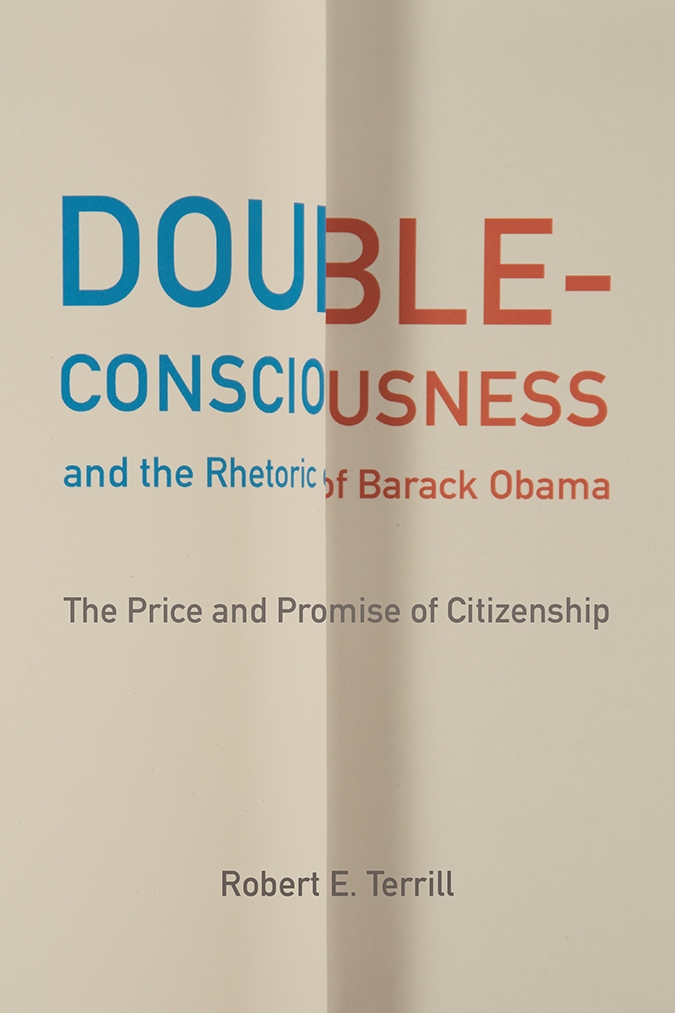 Double-Consciousness and the Rhetoric of Barack Obama

The Price and Promise of Citizenship

Robert E. Terrill argues that, to invent a robust manner of addressing one another as citizens, Americans must learn to draw on the delicate indignities of racial exclusion that have stained citizenship since its inception. In Double-Consciousness and the Rhetoric of Barack Obama, Terrill demonstrates how President Barack Obama's public address models such a discourse.

Terrill contends that Obama's most effective oratory invites his audiences to experience a form of "double-consciousness," famously described by W. E. B. Du Bois as a feeling of "two-ness" resulting from the African American experience of "always looking at one's self through the eyes of others." It is described as an effect of cruel alienation that can also bring a gift of "second-sight" in the form of perspectives on practices of citizenship not available to those in positions of privilege. When addressing fellow citizens, Obama is asking each to share in the "peculiar sensation" that Du Bois described. The racial history of U.S. citizenship is a resource for inventing contemporary ways of speaking about race.

Through close analyses of selected speeches from Obama's 2008 campaign and first presidential term, this book argues that Obama does not present double-consciousness merely as a point of view but as an idiom with which we might speak to one another. Of course, as Du Bois's work reminds us, double-consciousness results from imposition and encumbrance, so that Obama's oratory presents a mode of address that emphasizes the burdens of citizenship together with the benefits, the price as well as the promise.


Robert E. Terrill is an associate professor in the Department of Communication and Culture at Indiana University Bloomington. He earned his Ph.D. at Northwestern University in 1996 and focuses on the rhetorical criticism of African American public address. Terrill is the author of Malcolm X: Inventing Radical Judgment and editor of The Cambridge Companion to Malcolm X.

"This incisive work illuminates the influences of words and ideas and the process of democracy."—Choice

"Terrill offers a timely, engaging, and provocative study that brings together the innate trouble with cultivating healthy practices of democratic citizenship, an insightful analysis of the rhetorical capacities of Barack Obama, and a canonical African American trope of identity politics—double-consciousness. By rethinking the notion of duality, Terrill is able to present a work that is itself doubled. He utilizes double-consciousness as an interpretive protocol to assess the enduring and changing value of double-consciousness for illuminating contemporary rhetoric of race. Terrill also relocates double-consciousness to temporal and spatial coordinates not delimited by the experience of Du Bois' blackness; this analytical move enables an appreciation of our collective experiences of citizenship (and alienation) as ideally dual and that this doubled-ness discourages exclusionary politics. Terrill is at once a cogent and potent critic and Double-Consciousness and the Rhetoric of Barack Obama is a must read for students and scholars of Rhetorical Studies, Black Studies, American Studies, and Presidential Address."—Eric King Watts, author of Hearing the Hurt: Rhetoric, Aesthetics, & Politics of the New Negro Movement

"Robert Terrill has produced a well-written and engaging analysis of the interdependence of political rhetoric, democracy, and race in American politics. Using Barack Obama's presidency as a critical lens, Terrill explores the ways in which the dual-consciousness required by studying rhetoric maps onto a similar duality required by the practices of democratic citizenship. In so doing, he provides an important window into the centrality of race in our national politics, the Obama presidency, and the ways in which Obama himself serves as a site of invention for those concerned with democratic citizenship."—Mary E. Stuckey, Georgia State University

"Robert Terrill has provided a provocative and powerful examination of Barack Obama's rhetoric that intersects traditional rhetorical analysis with contemporary African centered cultural criticism. Terrill's exploration of Obama's invocation and expression of double-consciousness affirms and extends Du Bois's most basic insight: that the embodied two-ness of blackness inspires and inspirits the nation's culture and consciousness. His conceptualization of double-consciousness in black and white also reveals the presence of many shades of gray, brown, and crimson, as well as their absences. As with his brilliant explorations of the rhetoric of Malcolm X, Terrill invites us to consider the shapes and contours of American identity and citizenship and the transformative insights and visions that African American voices continue to bring to a democratic experiment that continues to approximate, but has yet to achieve, a more perfect union. As critic, scholar, and citizen, Robert Terrill provides an analysis of Barack Obama's double-consciousness that harmonizes perfectly with that chorus of voices."—Mark Lawrence McPhail, University of Wisconsin-Whitewater

"Given the United States' competing pluralisms, being an American has never been simple. Barack Obama adds more even color to its kaleidoscope and Robert Terrill nicely captures the resulting hues. In tracking the double consciousness of Obama's rhetoric, Terrill shows what makes Obama an American's American, which is to say, a man of multitudes. This book makes you think about important matters."—Roderick P. Hart, University of Texas at Austin