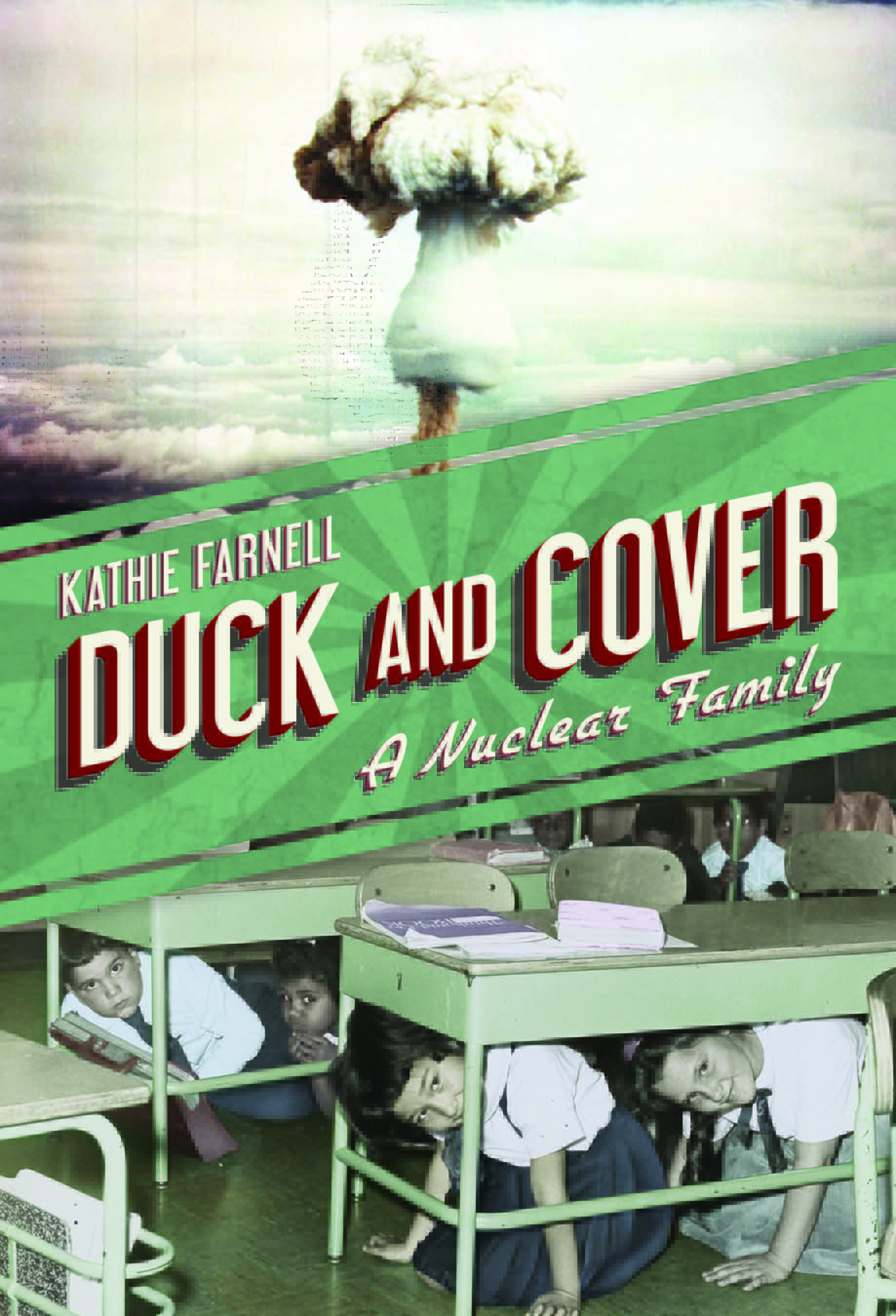 Duck and Cover is a wry, laconic memoir penned by Kathie Farnell, based on her perspective as a smart-mouthed, unreasonably optimistic white girl growing up in Cloverdale, a genteel and neatly landscaped neighborhood of Montgomery, Alabama, in the late 1950s and early 1960s. During those decades Montgomery's social order was slowly—very slowly—changing. The bus boycott was over if not forgotten, Normandale Shopping Center had a display of the latest fallout shelters, and integration was on the horizon, though many still thought the water in the white and colored drinking fountains came from separate tanks.

Farnell's household, more like the Addams family than the Cleavers of Leave it to Beaver, included socially ambitious parents who were lawyers, two younger brothers, a live-in grandmother, and Libby, the family maid. Her father was a one-armed rageaholic given to strange business deals such as the one resulting in the family unintentionally owning a bakery. Mama, the quintessential attorney, could strike a jury but was hopeless at making Jello. Granny, a curmudgeon who kept a chamber pot under her bed, was always at odds with Libby, who had been in a bad mood since the bus boycott began.

Farnell deftly recounts tales of aluminum Christmas trees, the Hula-Hoop craze, road trips in the family's un-air-conditioned black Bel Air, show-and-tell involving a human skeleton, belatedly learning to swear, and even the pet chicken she didn't know she had. Her well-crafted prose reveals quirky and compelling characters in stories that don't ignore the dark side of the segregated South, as told from the wide-eyed perspective of a girl who is sometimes oblivious to and often mystified by its byzantine rules. Little did she know that the Age of Aquarius was just around the corner.


Kathie Farnell, a native of Montgomery, Alabama, received a B.A. from the University of Montevallo and a J.D. from the University of Alabama School of Law. After serving as an attorney in the Alabama Office of the Attorney General, Farnell directed the University of Alabama's Office of Energy and Environmental Law and founded Farnell Legal Research. Bored out of her mind, she left law in 1995 to launch Artemis Media Project, a nonprofit organization that produces radio and television programs. She collaborated with Smithsonian Productions in 1998 on her first radio project, "Remembering Slavery," which won the Gabriel Award. Today she lives ten miles inland from the Gulf of Mexico with her husband, Jack Purser, and an assortment of cats. This is Farnell's first book.

"Southern boomers will find much to appreciate in the pages of this memoir. From its ironic title to its engaging voice and effective last line, Duck and Cover is sure to surprise and delight."—John Sledge, author of Southern Bound and The Mobile River

"The great strength of Kathie Farnell's beautifully written memoir is that she never assumes the role of the wiser adult who judges her childhood perceptions and actions. Rather, we hear consistently the voice of a smart, ironic, inquisitive, and funny young girl whose honest assessments of family, friends, and events transport us back smack dab into the middle of her intriguing world."—Norman McMillan, author of Distant Son: An Alabama Boyhood

"Not since Bill Bryson's The Life and Times of the Thunderbolt Kid have I enjoyed a book about growing up in the decades after World War II as much as Kathie Farnell's Duck and Cover. All the wry wit, zany pranks, childhood mischief and precociousness, everything that sends us into gales of laughter and moments of serious reflection about childhood, fill the pages of this Dixie version of Bryson's famous Iowa childhood. It is a treasure!"—Wayne Flynt, Distinguished University Professor Emeritus, Auburn University