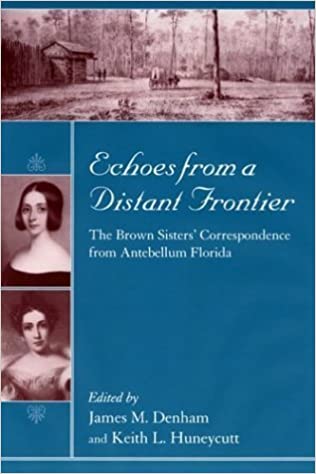 Echoes from a Distant Frontier

Echoes from a Distant Frontier is an edited, annotated selection of the correspondence of Corinna and Ellen Brown, two single women in their twenties, who left a comfortable New England home in 1835 for the Florida frontier. Moving with two aunts and a brother following the deaths of their parents, the Brown sisters settled near the village of Mandarin on the east bank of the St. Johns River, just south of present-day Jacksonville. These two articulate and literate women, both aspiring authors, wrote of their experiences and observations to family members—most important their brother Mannevillette Brown, an artist who lived in various European locales and eventually in Utica, New York.

Within a month of their arrival on the shores of the St. Johns, the frontier erupted in Indian war. The Browns witnessed the terror and carnage firsthand, and their letters paint a vivid picture of the Second Seminole War (1835-1842). Their letters and those of their correspondents also contain astute observations about everyday life in a time, place, and society for which a very limited record remains.

Resolute and independent, the Brown sisters eventually married men who were actively engaged in the conflict—an army officer and a surgeon attached to the army. The sisters corresponded from the many places they lived during their fifteen-year residence in Florida, including St. Augustine, Newnansville, Fort King (Ocala), Pensacola, and Key West. Both as transplanted New Englanders struggling to survive in America's southernmost frontier and as wives of southern-born men, the sisters provide valuable insights on their social and domestic circumstances and on a largely undocumented region of the South.

Keith L. Huneycutt is a professor of English and department chair at Florida Southern College. He holds a Ph.D. in English from the University of North Carolina–Chapel Hill. His articles have appeared in Military History of the West and Florida Historical Quarterly. Huneycutt also lives in Lakeland.

"This wonderful book is a story that asks, can two well-educated and sophisticated young sisters from Portsmouth, New Hampshire, find happiness on the rude, unlettered, and dangerous frontier of East Florida during the Second Seminole War? The answer is given by the sisters themselves in correspondence lovingly edited and thoroughly annotated by James M. Denham and Keith L. Huneycutt. This is history at its most pleasurable. Enjoy!"—Michael Gannon, Distinguished Service Professor Emeritus of History, University of Florida

"The Brown sisters' correspondence brings to life the Florida frontier of the antebellum period. Transplanted Yankees, Corinna and Ellen were astute observers of war, politics, and social customs. This fine collection of their letters reveals settlers' fears and ambitions, as well as the financial and intellectual challenges women faced."—Tracy J. Revels, Department of History, Wofford College