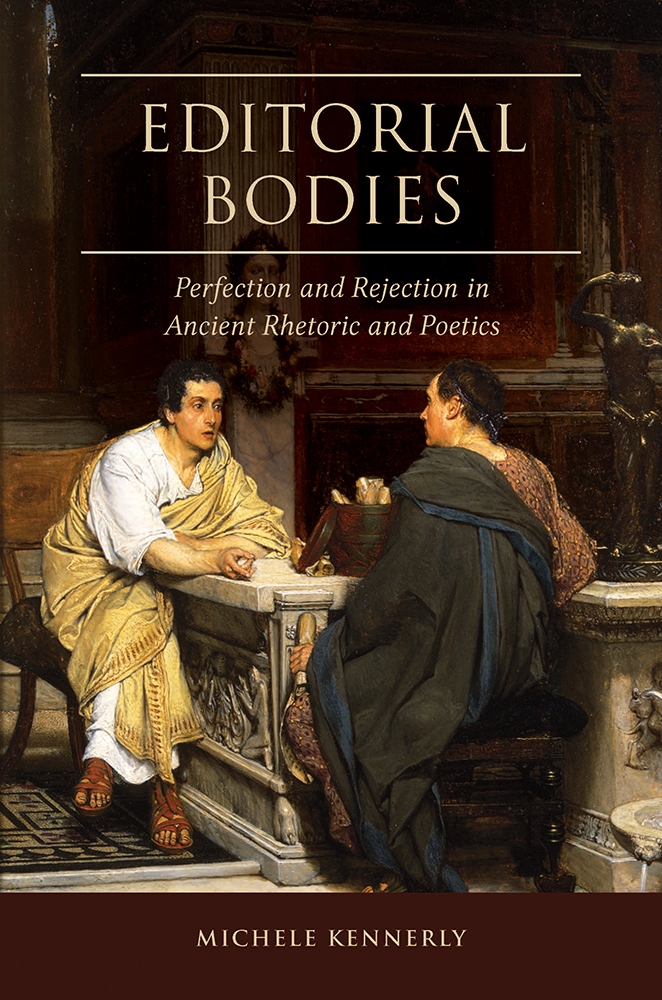 Perfection and Rejection in Ancient Rhetoric and Poetics

Reveals the emergence and endurance of vocabularies, habits, and preferences that sustained ancient textual cultures

Though typically considered oral cultures, ancient Greece and Rome also boasted textual cultures, enabled by efforts to perfect, publish, and preserve both new and old writing. In Editorial Bodies, Michele Kennerly argues that such efforts were commonly articulated through the extended metaphor of the body. They were also supported by people upon whom writers relied for various kinds of assistance and necessitated by lively debates about what sort of words should be put out and remain in public.

The result is a rich and original history of rhetoric that reveals the emergence and endurance of vocabularies, habits, and preferences that sustained ancient textual cultures. This major contribution to rhetorical studies unsettles longstanding assumptions about ancient rhetoric and poetics by means of generative readings of both well-known and understudied texts.

Michele Kennerly is an assistant professor of communication arts and sciences and of classics and ancient Mediterranean studies at Pennsylvania State University. With Damien Smith Pfister, she is coeditor of Ancient Rhetorics and Digital Networks.

"Michele Kennerly has produced an erudite contribution to the fields of ancient rhetoric, intellectual history, and classics ... At a time when the field is rightly questioning the nature and importance of the canon of the Western "rhetorical tradition," Kennerly's text serves as a model for how historians of rhetoric can use relatively traditional scholarly methods to engage canonical texts in new and important ways: Editorial Bodies suggests both the value and possibility of enlivening old traditions by revisiting them on new terms."—Rhetoric Society Quarterly

"Editorial Bodies demonstrates equal zeal in the breadth of its coverage, the precision of text analysis, and the rigor of research; it attends to large theme and detail at the same time, and makes its argument through attention to physical element...a delight to read in its playful and rich associativeness, epitomizing many aspects of the ancient practices of composing...The book would make a great adoption in any graduate course on classical rhetoric, literacy studies, archival methods, as well as material rhetoric."—Quarterly Journal of Speech

"Kennerly's monograph, tracing the history of authorial revision and editing in Greek and Latin poetry and oratory, is a timely contribution...It also, excitingly, sits at the intersection of a number of other fields: rhetorical theory, ancient literary criticism and the history of the book. Kennerly programmatically positions her book as a work on ancient textual culture rather than ancient literary culture, emphasizing the bookishness and materiality of ancient poetic and oratorical practices."—Bryn Mawr Classical Review

"Michele Kennerly's Editorial Bodies is a daring and delightful study. The labor of the file—editorial work on written versions of Roman orations—is the focus of this highly original monograph. Prepare to be dazzled by Kennerly's erudite engagement with the ancient source languages and her own carefully wrought style."—Susan C. Jarratt, University of California, Irvine

"Editing' has no essence, but it does have a history of specific cultural understandings and practices. Working with texts spanning the classical Greek and Roman era, Kennerly provides an account of editing that is impressive in its scope and in the depth of the analysis of specific authors. She makes a convincing case that understanding what can be called the theory, practice, and politics of editing is a crucial part of comprehending the 'textual cultures' in which rhetoric and poetics flourish."—Edward Schiappa, Massachusetts Institute of Technology