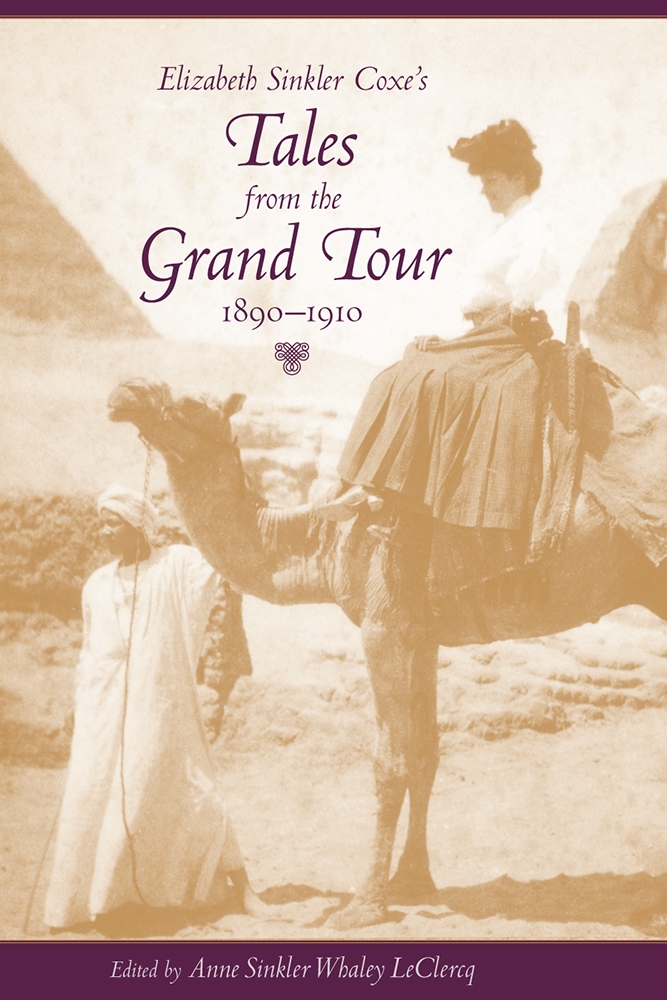 Elizabeth Sinkler Coxe's Tales from the Grand Tour, 1890-1910 is a travelogue of captivating episodes in exotic lands as experienced by an intrepid American aristocrat and her son at the dawn of the twentieth century. A member of the prominent Sinkler family of Charleston and Philadelphia, Elizabeth "Lizzie" Sinkler married into Philadelphia's wealthy Coxe family in 1870. Widowed just three years later, she dedicated herself to a lifelong pursuit of philanthropy, intellectual endeavor, and extensive travel. Heeding the call of their dauntless adventuresome spirits, Lizzie and her son, Eckley, set sail in 1890 on a series of odysseys that took them from the United States to Cairo, Luxor, Khartoum, Algiers, Istanbul, Naples, Vichy, and Athens. The Coxes not only visited the sites and monuments of ancient civilizations but also participated in digs, funded entire expeditions, and ultimately subsidized the creation of the Coxe Wing of Ancient History at the University of Pennsylvania Museum.

A prolific correspondent, Lizzie conscientiously recorded her adventures abroad in lively prose that captures the surreal exhilarations and harsh realities of traversing the known and barely known worlds of Africa and the Middle East. She journeyed through foreign lands with various nieces in tow to expose them to the educational and social benefits of the Grand Tour. Her letters and recollections are complemented by numerous photographs and several original watercolor paintings.


A native of Charleston, Anne Sinkler Whaley LeClercq is director of the Daniel Library at the Citadel and a great-grandniece of Elizabeth Sinkler Coxe. She holds a master's degree in librarianship from Emory University and a J.D. from the University of Tennessee. LeClercq is also editor of Between North and South: The Letters of Emily Wharton Sinkler, 1842–1865, and author of An Antebellum Plantation Household: Including the South Carolina Low Country Receipts and Remedies of Emily Wharton Sinkler.

"Through both words and pictures, this vivid chronicle of camels and trains, dervishes and pyramids, demonstrates the grand tour's cultural importance."—Charleston (S.C.) Magazine

"The letters make for terrific armchair-and-ottoman reading, superb in their evocation of time. . . . To bridge the gaps in the letter-writing chronology, LeClercq contributes a highly readable narrative that pulls the reader along like a good novel."—Charleston (S.C.) Post & Courier

"Sharing the story of a woman who was comfortable in the North and the South and embraced a larger world as well, Elizabeth Sinkler Coxe's Tales from the Grand Tour broadens our understanding of the complexities of the postbellum United States."—Journal of Southern History