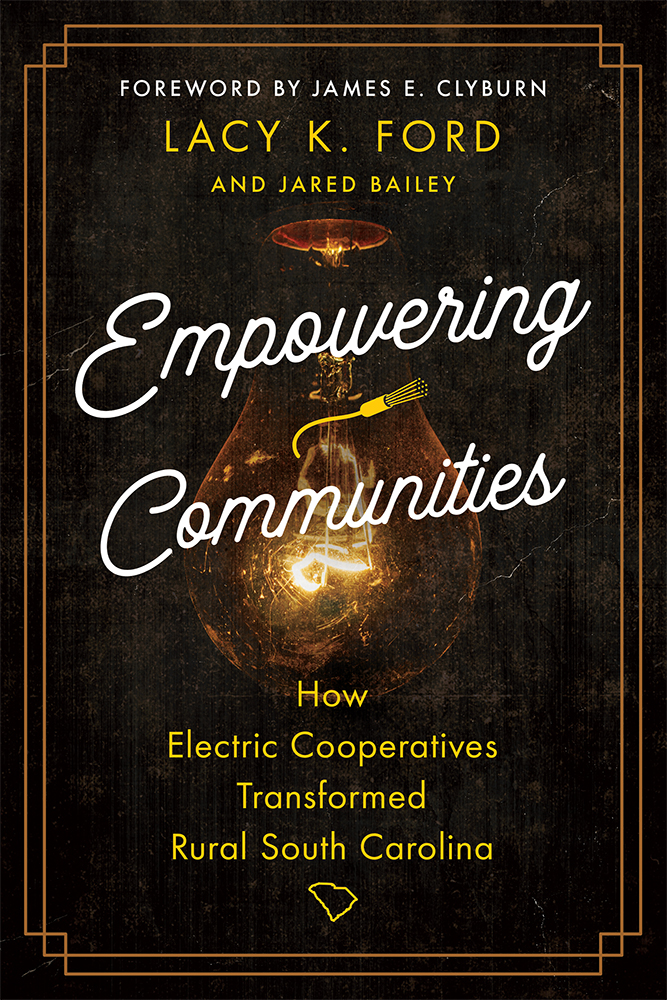 Early in the twentieth century, for-profit companies such as Duke Power and South Carolina Electric and Gas brought electricity to populous cities and towns across South Carolina, while rural areas remained in the dark. It was not until the advent of publicly owned electric cooperatives in the 1930s that the South Carolina countryside was gradually introduced to the conveniences of life with electricity. Today, electric cooperatives serve more than a quarter of South Carolina's citizens and more than seventy percent of the state's land area, bringing not only power but also high-speed broadband to rural communities.

The rise of "public" power—electricity serviced by member-owned cooperatives and sanctioned by federal and state legislation—is a complicated saga encompassing politics, law, finance, and rural economic development. Empowering Communities examines how the cooperatives helped bring fundamental and transformational change to the lives of rural people in South Carolina, from light to broadband.

James E. Clyburn, the majority whip of the U.S. House of Representatives from South Carolina, provides a foreword.


Lacy K. Ford, professor of history at the University of South Carolina, is the author of several books, including Deliver Us from Evil: The Slavery Question in the Old South.

"Electric cooperatives have had an enduring role in improving the quality of life of South Carolinians for nearly a century. From delivering electricity for the first time to rural homes in the 1930s and 1940s to their modern efforts to ensure availability of high-speed internet to underserved communities, the co-ops have adapted to the changing needs of the people they serve, and our state is better for it."—Henry McMaster, governor, South Carolina

"The authors have chronicled the history of South Carolina and trends across the South. Few of those stories are as important as the emergence of electric cooperatives in South Carolina and other states that brought prosperity to rural areas. This compelling account of the state's electric co-ops reveals the importance of these member-owned entities to the communities they serve, extending beyond energy delivery to economic prosperity and, more recently, closing the digital divide."—Jim Matheson, CEO, National Rural Electric Cooperative Association

"As a cooperative with a demonstrated track record of being totally committed to the seventh Cooperative Principle, we have sought guidance and affirmation from our South Carolina colleagues who hold a lead position in delivering industry recruitment, community development, and energy efficiency programs and services. Leveraging ideas and sharing lessons learned, as we have done, are major contributors to rural electric cooperatives' eighty-plus years of success in serving rural America."—Curtis Wynn, president and CEO, Roanoke Electric Cooperative in North Carolina, and immediate past president, board of directors, National Rural Electric Cooperative Association

"South Carolina's electric cooperatives have skillfully navigated the state's complicated and often treacherous political waters for more than half a century, helping South Carolina avoid the shoals of catastrophe with disastrous commitments to dirty, expensive, outmoded energy production—most notably stopping construction of the infamous 'last coal plant in America' on the banks of the Pee Dee River. Meanwhile, the leadership has steered these consumer-owned companies toward important investments in conservation and renewable energy. Today as we embark on a critical period in energy service, we need the co-ops' innovation and responsiveness more than ever."—Dana Beach, founder and executive director emeritus, South Carolina Coastal Conservation League

"Implementing the 'Help My House' program demonstrates the deep caring and commitment the South Carolina electric co-op leadership has for the well-being of their members, many of whom are struggling to meet basic daily needs. It has been a joy for me to work with the co-ops on HMH from the start!"—Carol Werner, director emerita and senior fellow, Environmental and Energy Study Institute

"In the 1930s many questioned whether the fledgling Electric Cooperatives of South Carolina had the expertise to serve their members. That question was answered long ago. Yet, even today they act like they have something to prove."—Ted Case, executive director, Oregon Rural Electric Cooperative Association