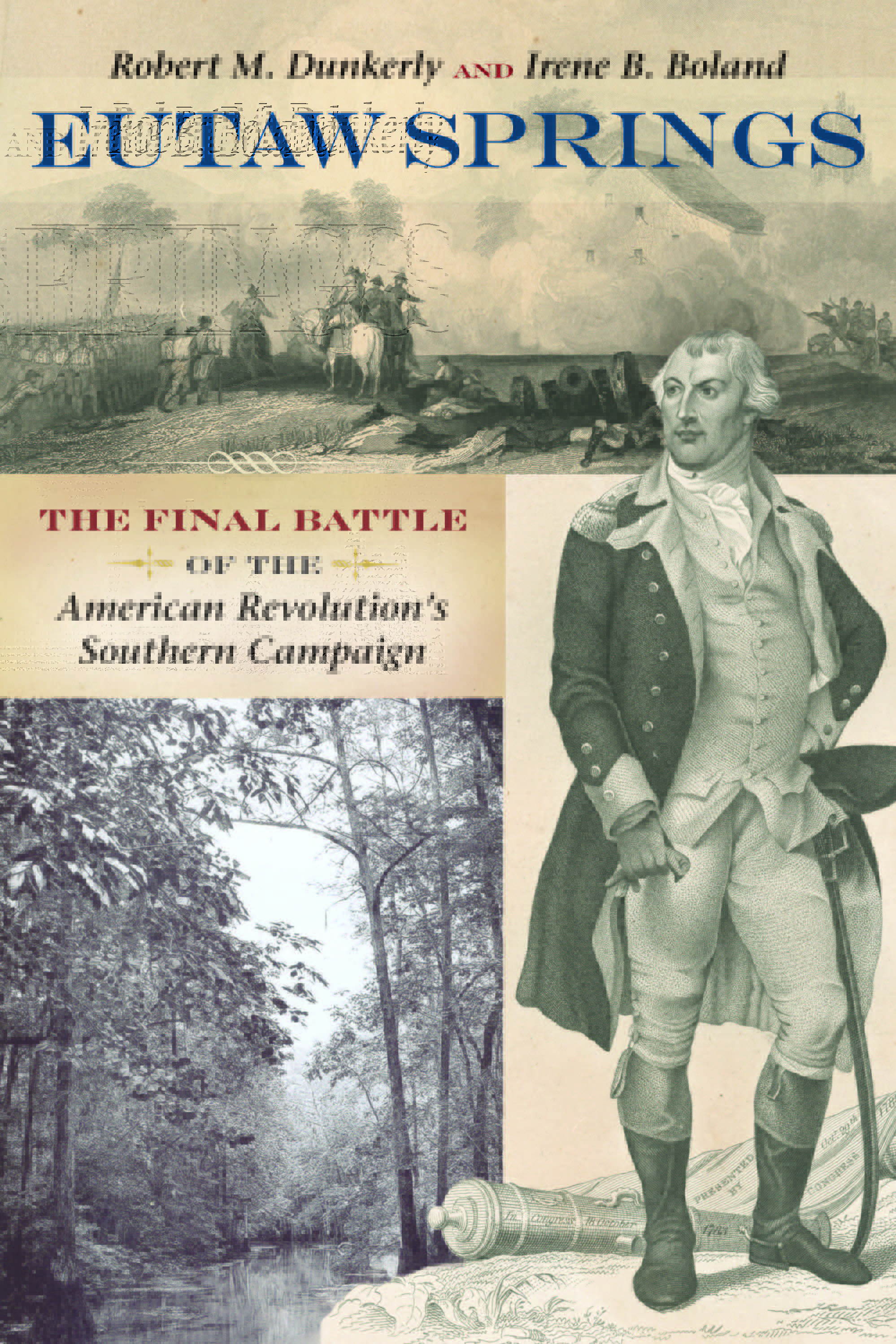 The Final Battle of the American Revolution's Southern Campaign

The Battle of Eutaw Springs took place on September 8, 1781, and was among the last in the War of Independence. It was brutal in its combat and reprisals, with Continental and Whig militia fighting British regulars and Loyalist regiments. Although its outcome was seemingly inconclusive, the battle, fought near present-day Eutawville, South Carolina, contained all the elements that defined the war in the South. In Eutaw Springs: The Final Battle of the American Revolution's Southern Campaign, Robert M. Dunkerly and Irene B. Boland tell the story of this lesser known and under-studied battle of the Revolutionary War's Southern Campaign. Shrouded in myth and misconception, the battle has also been overshadowed by the surrender of Yorktown.

Eutaw Springs represented lost opportunities for both armies. The American forces were desperate for a victory in 1781, and Gen. Nathanael Greene finally had the ground of his own choosing. British forces under Col. Alexander Stewart were equally determined to keep a solid grip on the territory they still held in the South Carolina lowcountry.

In one of the bloodiest battles of the war, both armies sustained heavy casualties with each side losing nearly 20 percent of its soldiers. Neither side won the hard-fought battle, and controversies plagued both sides in the aftermath. Dunkerly and Boland analyze the engagement and its significance within the context of the war's closing months, study the area's geology and setting, and recount the action using primary sources, aided by recent archaeology.


Robert M. Dunkerly is a historian, award-winning author, and speaker who is actively involved in historic preservation and research. He earned a B. A. in history from St. Vincent College and an M.A. in historic preservation from Middle Tennessee State University. His research includes archaeology, colonial life, military history, and historic commemoration. Dunkerly has taught courses at Central Virginia Community College, the University of Richmond, and the Virginia Historical Society. He is currently a park ranger at Richmond National Battlefield Park.

"a well put together book that is easy to read, and it makes good use of graphic material. Eutaw Springs is recommended."—The Journal of America's Military Past

"This is a long-overdue study of the Battle of Eutaw Springs, Nathanael Greene's last main force Southern campaign engagement. Drawing from a wealth of resources including new research, archaeology and pension documents, the authors have created an easy reading account of the 8 September 1781 battle that drove the British to the coast. For students of the Revolutionary War, this is must reading because so much focus has been directed at Yorktown where the British abandoned an army instead of the more mobile war in the South where the war was finally won by wearing down the British."—Lawrence Babits, George Washington Distinguished Professor of History, East Carolina University

"Dunkerly and Boland have produced a solid, well-written account of Eutaw Springs that fills a gap in the history of the southern campaigns and provides a strong foundation for further study of this important battle."—North Carolina Historical Review

"a very good analysis of the political, military, and physical environment, with some profiles of a number of interesting people, most notably Nathanael Greene, after Washington the most important American general of the war, though he never won a battle."—New York Military Affairs Symposium Review