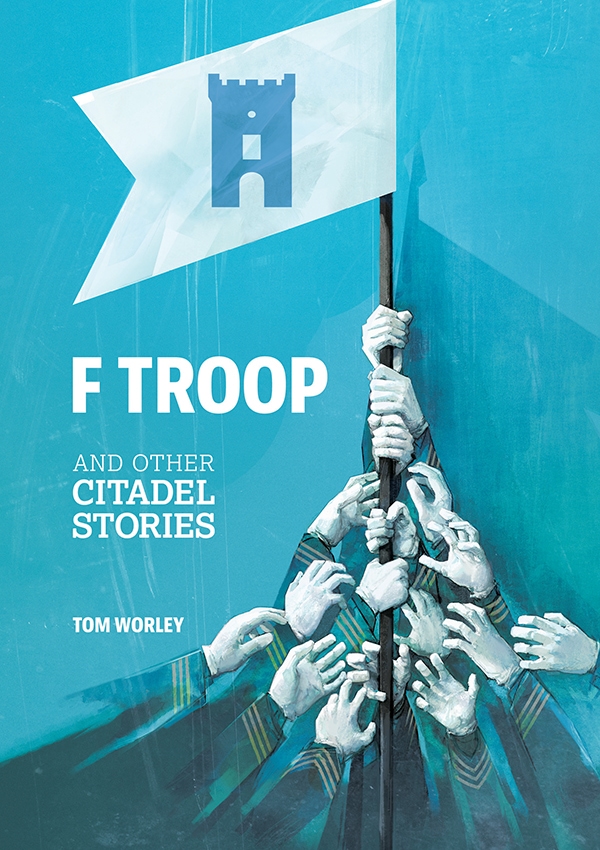 F Troop and Other Citadel Stories

From its founding in 1842 the Citadel has been steeped in tradition. There have been changes through the years, but the basics of the military code and the plebe system have remained constant. Citadel graduate Tom Worley has crafted this collection of short stories about life at the South Carolina military academy during the 1960s. While the stories are fictional, they are inspired in part by his days as a student on the college campus. With humor and dramatic clarity, Worley reveals the harshness of the plebe system, how success is achieved through perseverance, and the character-building benefits of a Citadel education.

These seventeen stories are told from the perspective of two main characters—cadets Pete Creger and Sammy Graham—who are members of F Company. By turns surprising and entertaining, the collected stories range from the emotional and physical trials of being a knob in the plebe system, the brutality of hazing, and the fear and fun of company pranks, to the friendship and camaraderie the system fosters and the tremendous pride shared by those who wear the coveted Citadel ring.

Best known for its Corps of Cadets, the Citadel attracts students who desire a college education within a classical military system in which leadership and character training are essential parts of the overall experience. Any romanticized notion of military bravado is quickly shattered the moment students set foot on campus and their parents drive away. Many cadets are left wondering, "What have I signed up for?" Worley's stories shed light on the pain and the pride, explaining why, he says, "most cadets at the Citadel hated the place while they were there and loved everything about it once they'd graduated. They were bonded together for life. Perhaps that's the greatest thing the Citadel did for them."


Tom Worley, a 1968 graduate of the Citadel and former member of F Company, practices law in Charleston, South Carolina. He and his wife, Nancy, have two children and four grandchildren. Worley is currently working on a new collection of short stories and a novel.

"When I read Tom Worley's powerful collection of Citadel stories, it was like reading my own novel The Lords of Discipline as told from a different point of view. The Citadel marks its graduates in both glorious and troubling ways. The plebe system shapes us with its dark, indelible matrix forever and the Citadel experience becomes the most commanding force in our lives. Better than most anyone, Tom Worley tells us why."—Pat Conroy

"With humor and dramatic clarity, Worley reveals the harshness of the plebe system, how success is achieved through perseverance, and the character-building benefits of a Citadel education."—Lowcountry Companion

"Tom Worley has captured a place in time—the Citadel in the 1960s. Alumni will share the memories and all readers will marvel at Tom's ability to portray the trials and tribulations of being a cadet back then."—Lt. Gen. John W. Rosa, USAF (retired), class of 1973, president, The Citadel

"For those who've attended the Citadel, they'll recognize—either with smiles or winces of remembrance—these stories. For those who know Citadel grads this book is a glimpse into the world that shaped the Citadel grad they know. Tom Worley, with a storyteller's eye for detail, takes us to a place many of us will never see firsthand and, for those who lived it, a memory they'll immediately see as their own."—Cathy Pickens, author of Charleston Mysteries and Southern Fried

"F Troop and Other Citadel Stories is a must read for anyone who wears the ring. TomWorley has added his name to the list of accomplished Citadel authors. He takes the reader backto that first step through the sally port and along the arduous path of those who joined The LongGray Line, to include the heartbreak of losing classmates in combat. The book is well-written, insightful, humorous and always candid. Congratulations to Tom, to F Troop and to all the Citadel men and women who made the journey."—Michael Duffy, Master of Revels, Citadel class of 1965

"Tom Worley's recollections of our freshman year '64-65 at The Citadel give the reader both an accurate and amusing account. F Troop had a different story from most other companies in that its young men bonded together via a very harsh plebe system that, thankfully, no longer exists. I witnessed these events unfold from G Company next door in Padgett-Thomas barracks. I saw these stories unfold and am amazed at how precise his memories are and find this book quite fun to read. Many thanks to my Citadel and law school classmate for doing such a great job!"—Billy Jenkinson, Citadel Class of 1968, former chairman and emeritus member of The Citadel Board of Visitors