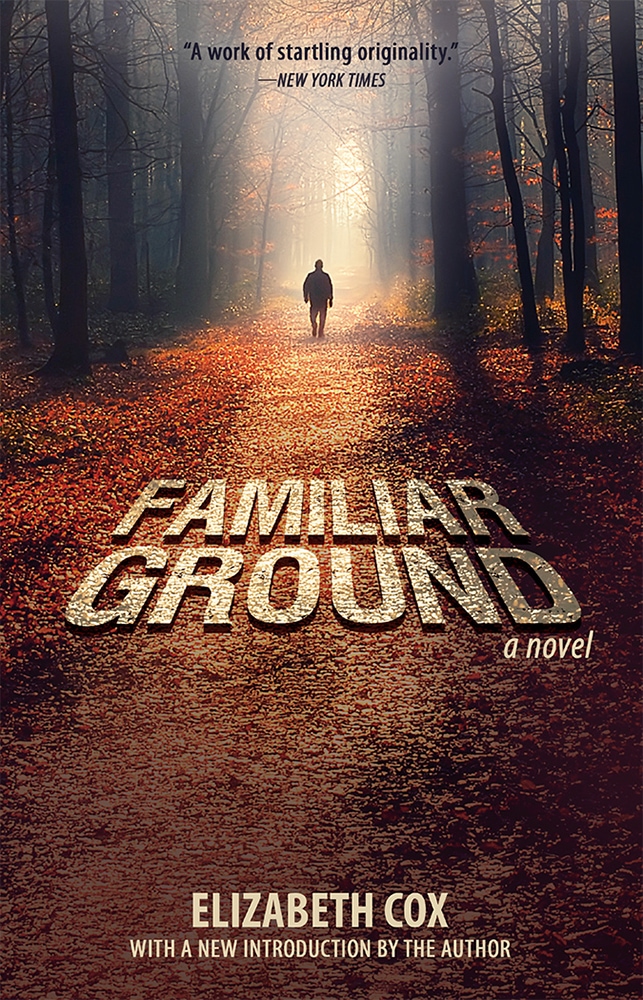 A novel of homecoming, loss, and the power of story, Familiar Ground follows the return of Jacob Bechner to rural Sweetwater, Tennessee, summoned by Callie, a dying woman nearly 100 years old. Jacob aims to confront a moment of violence from forty years in his past that cost him the life of his brother Drue. Elizabeth Cox's debut novel, first published in 1984, is about the recurrence of loss in our lives and of the intractability of guilt that must give way for any measure of self-forgiveness.

The novel introduces us to a memorable collection of southern characters. There is the indomitable Callie, who has suffered rape and ostracism from the locals; Soldier, a mentally handicapped man lost in his loneliness; Jacob's alcoholic father and gentle mother; his great-niece and -nephew, whom have already known terrible loss in their young lives; and Jacob's steadfast wife, Molly, whose understanding of her husband is upended by the revelations of his past. With sparse prose and an authentic southern landscape and cast, Cox delivered an impressive first novel, the merits of which still hold up three decades later.

This Southern Revivals edition includes a new introduction by the author and a contextualizing preface from series editor Robert Brinkmeyer, director of the University of South Carolina Institute for Southern Studies.


Elizabeth Cox is the author of poetry and short story collections and three other novels: The Ragged Way People Fall Out of Love, Night Talk (winner of the Lillian Smith Award and a finalist for the IMPAC Dublin Literary Award), The Slow Moon, and A Question of Mercy (forthcoming from the University of South Carolina Press). She has been recognized with the Robert Penn Warren Award and the North Carolina Fiction Award and inducted into the Fellowship of Southern Writers. Cox has taught creative writing at Duke University, University of Michigan, University of Massachusetts–Lowell, Tufts University, Boston University, MIT, Bennington Writing Seminars, and most recently at Wofford College, where she shared the John Cobb Chair with her husband, C. Michael Curtis, fiction editor for the Atlantic.

"A writer of deep insights and a talent for conveying a sense of time and place."—Publishers Weekly

"Her calm, clear writing treats the South knowingly. . . . You'll find yourself thinking of these characters exactly as you think of people you know."—USA Today

"Cox can use her words like blunt instruments—they deliver a knockout blow. . . . We know we've glimpsed magic that we can't quite explain."—Washington Post