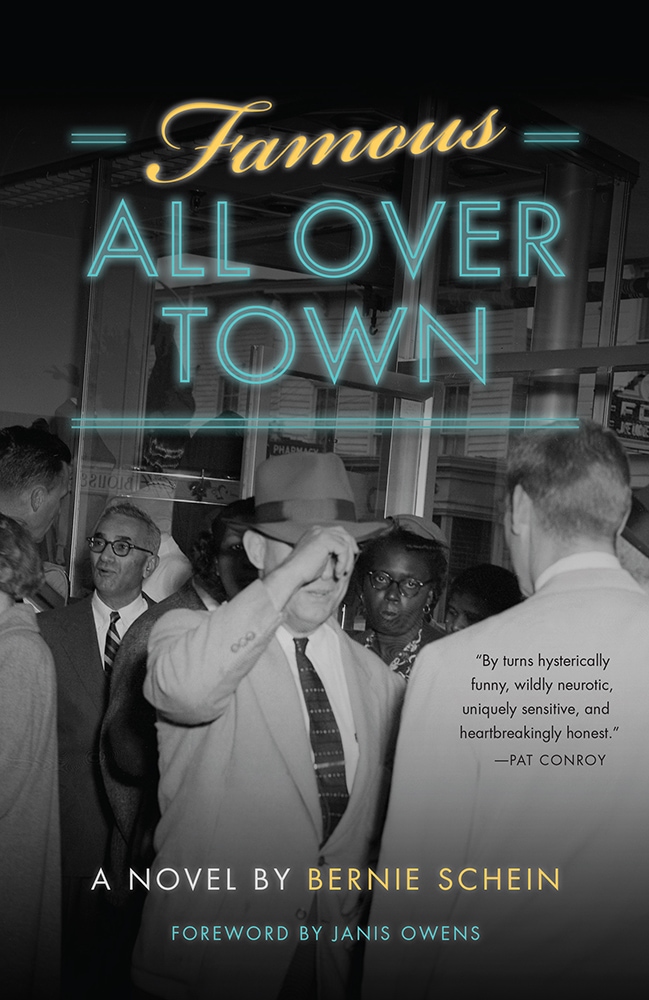 Famous all over Town

Novelist Walker Percy once said that the only remaining unexplored territory in Southern literature was the Jewish southerner. Famous all over Town, the first novel from Southern storyteller Bernie Schein, stakes a claim on Percy's unexplored terrain with a comically candid multi-generational account of two Jews, a lowcountry native and a Northern transplant, at the epicenter of momentous events in the sleepy southern coastal hamlet of Somerset, a fictitious stand-in for Schein's native Beaufort, South Carolina.

Delving beneath the surface of the Southern status quo, Schein's tale follows these interconnected lives through the private and public upheavals in small-town life from the turbulent 1960s to the eve of the new millennium, confronting the ramifications of the civil rights era, Vietnam, Watergate, and—closer to home—a deadly version of the infamous Ribbon Creek incident. Somerset's colorful citizens also confront their own repressed memories, conflicted identities, burgeoning ambitions, and romantic entanglements. Even as events unfold to often-uproarious effect, Schein's novel holds true to a deeply realized sense of intimacy and authenticity in the interactions of its myriad characters as revelations expose how these disparate lives are conjoined in surprising ways. Shifting points of view place readers squarely in the mindsets of many of Somerset's key citizens as Schein lovingly and laughingly invites us to reconsider what it means in the modern South to be white, black, Jewish, Christian, military, civilian, sane, insane, old, young, male, female, gay, and straight—and to be of a place rather than merely in it.


Retired educator Bernie Schein is the author of If Holden Caulfield Were in My Classroom: Inspiring Love, Creativity, and Intelligence in Middle School Kids and, with his wife, Martha Schein, coauthor of Open Classrooms in the Middle School. He holds an Ed.M. from Harvard University with an emphasis in educational psychology. A forty-year veteran of middle school instruction and administration, Schein has served as the principal of schools in Mississippi and South Carolina and helped found the independent Paideia School in Atlanta, where he was honored as Atlanta's District Teacher of the Year in 1978. His stories and essays have appeared in Atlanta Magazine, Atlanta Weekly, the Beaufort Gazette, Creative Loafing, Lowcountry Weekly, and the Mississippi Educational Advance, and he has been interviewed on National Public Radio.

"I read the book. I love the book. I think it is about much more than our home town in earlier days. It is such a fine reflection of Bernie's career working with young and old to capture and manage the inner child in us all but sometimes torments some more than others."—Billy Keyserling, mayor of Beaufort, South Carolina

"Bernie Schein is the funniest man alive, or so he has dogmatically maintained during the burdensome decades I have known him. Like its author, this ambitious novel is by turns hysterically funny, wildly neurotic, uniquely sensitive, and heartbreakingly honest. Bernie has staked his claim on the literary landscape of the South with his unforgettable small town of equally unforgettable Jews, whites, blacks, marines, politicians, prostitutes, cops, killers, sell-outs, aristocrats, journalists, and rebels. He shies away from neither the best nor worse in us and, with compassion and authority, tells a story that is at once his own and that of everyone you will ever meet, each made famous all over town."—Pat Conroy

"Since you can't sing "Dixie," "We Shall Overcome," and "My Yiddishe Momme" all at once, you must read this splendid novel, a vision of the small-town South, past and present, that will rattle your funny bone and rend your heart."—Peter Golden, author of Comeback Love

"Bernie Schein's Famous all over Town achieves what engaging storytelling is supposed to achieve—expressive characters revealing spirited stories. Covering the '60s into the '90s of conflict and change in the lowcountry of South Carolina, Schein's cast of activists rise up in triumph. Splendidly written, it is a reader's delight."—Terry Kay, author of To Dance with the White Dog and The Book of Marie

"Famous all over Town captures the heart and essence of imperfect, lovable, infuriating, and admirable southern characters in a story full of vivid images and intersecting story lines from the '60s through the '90s. With a soft heart and a calloused hand, Bernie Schein introduces us to a South we might not ever know without him, and it's a place I'd like to settle in for good."—Patti Callahan Henry, author of The Stories We Tell, And Then I Found You, and others

"In his impressive and overflowing epic tale, Schein creates a world that is as real as it is hilarious and tragic. His characters confront head-on the possibilities and impossibilities of race, religion, and class in a lowcountry town. I promise you, this is a remarkable book."—Judy Goldman, author of Losing My Sister

"Every South Carolina schoolboy in the '60s knew the story of the shaved-head, steely-eyed recruits who were maliciously marched into the pluff mud at Parris Island, a place we all feared, for good reason. Within these pages, Bernie Schein transports us deep into that psychologically loaded place and time where religion and racism serve as barometric bookends to a tragedy that touched the lives of an entire town and resonated with the whole nation."—Ken Burger, author of Swallow Savannah, Sister Santee, and Salkehatchie Soup

"Another time, another place—yet Somerset, South Carolina, is every small town anywhere in anytime. Its characters represent each of us in all of our flawed, tragicomic humanity. I know these people and you will, too. They're friends, relatives, neighbors, the people we go to church or synagogue with, the ones we wed and bed, love and hate, mourn and bury. Leaning on their backyard fences, they're already spreading the word: YOU are in this book!"—Cassandra King Conroy