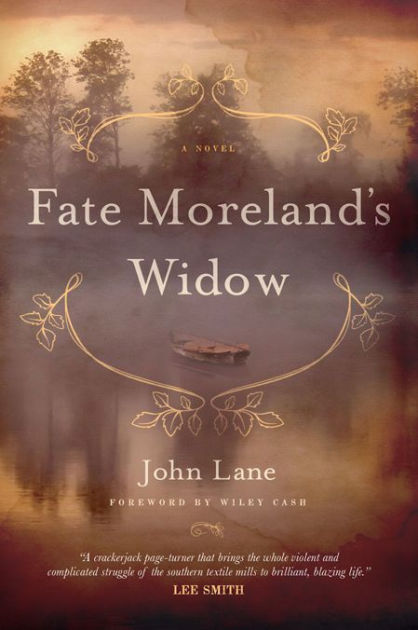 On a placid Blue Ridge mountain lake on Labor Day Weekend in 1935, three locals sightseeing in an overloaded boat drown, and the cotton mill scion who owns the lake is indicted for their murders. Decades later Ben Crocker—witness to and reluctant participant in the aftermath of this long-forgotten tragedy—is drawn once more into the morally ambiguous world of mill fortunes and foothills justice.

The son of mill workers in Carlton, South Carolina, Crocker is caught between competing loyalties to his family and future. Crocker wanted more than a rough-hewn life on a factory floor, so he studied accounting at the local textile institute and was hired as bookkeeper to the owner, George McCane, a man as burdened by his familial ties as Crocker and even less prepared for the authority of his mantel.

McCane's decision to renovate the Carlton Mill and lay off families connected to the Uprising of '34, one of the largest labor strikes in U.S. history, puts Crocker in the ill-fitting position as his boss's enforcer. Days after the evictions, the surprise indictment lands McCane in a North Carolina mountain jail and sinks Crocker even deeper into the escalating tensions between mill workers and the owners.

While traversing mountain communities in McCane's defense, Crocker must also manage the forced renovation of the Carlton Mill, negotiate with labor organizers led by local hero Olin Campbell, collaborate with McCane's besotted brother, Angus, and fend off his father's and wife's skepticism of his own social aspirations. Hanging distractingly over Crocker's upended life is his burgeoning infatuation with Novie Moreland—the young widow of one of those McCane is accused of killing. Though unrequited, Croker's relationship with Novie proves to be a beacon of hope amid the shadows of political and social machinations in the darkest chapter in his long life.

As the union retaliates and the McCane murder trial is settled, it is uncertain who the winners and losers have been in this generational clash of workers and owners, labor and capital, those tied to the land and its people and those who exploit both. When Crocker looks back from 1988 at these two crucial years in his life in the mid-1930s, he is left to wonder if he did right by himself and those closest to him. Against all better judgment, Crocker knows he must seek out Novie Moreland once more if he is ever to find closure with the past.


John Lane is the author of a dozen books of poetry and prose, including My Paddle to the Sea; Begin with Rock, End with Water; and most recently Abandoned Quarry: New and Selected Poems, winner of the 2012 Southeastern Independent Booksellers Alliance Book Award for Poetry. A professor of English and director of the Goodall Environmental Studies Center at Wofford College in Spartanburg, South Carolina, Lane is a 2014 inductee into the South Carolina Academy of Authors.

"John Lane has long been recognized as one of the South's finest poets and memoirists. This debut establishes him as one of our finest novelists as well. His poet's eye for detail seamlessly merges with a born storyteller's gift for narrative. Fate Moreland's Widow gives voice to those who endured one of the most painful and neglected chapters in American history."—Ron Rash

"The literature of the southern mill village has been underdone and this magnificent novel adds greatly to it. What John Lane does better than anyone I have read is explore the interrelatedness of both the mill worker and the mill owner, trapped by the desires and abuses of unchecked power. Their symbiosis is opaque and troublesome. In the widow Novie Moreland, John has crafted a masterfully nuanced new symbol of male obsession and female resilience poised to become the Circe of the Carolina foothills."—Pat Conroy

"Ben Crocker is a sympathetic but sharp-eyed protagonist, torn by his loyalty to his family and mill workers on one hand and on the other, his ambition and opportunity to work for the powerful McCanes. John Lane weaves in descriptions of the mill, the town, and the McCane family's fiefdom, with rich character dynamics and a compelling plot. Whether it's the German hired to drag the lake, the palpable tension in the courtroom scene, or the Baptist funeral, John has captured the sense of place that brings to mind the fiction of Ron Rash and Robert Morgan. This is a story that needs to be told and that deserves to be read."—Mindy Friddle

"Fate Moreland's Widow, the haunting first novel from award-winning poet, environmentalist, and story-teller John Lane, delves into historically inspired events of life, livelihood, death, and destiny against a rural southern backdrop on the cusp of modernity."—Idgie, Dew on the Kudzu

"John Lane deftly captures the hardscrabble plight of the southern mill worker and the ambitious greed of the southern mill owner in Fate Moreland's Widow. But he does an even better job of capturing the quandary of Ben Crocker, the man precariously stuck in the middle."—Wiley Cash, from the foreword

"John Lane has written a crackerjack page-turner that brings the whole violent and complicated struggle of the southern textile mills to brilliant, blazing life. Narrator Ben Crocker is a man caught between two worlds: the poverty of his own childhood spent among hill people and millworkers versus the prosperity and social status attached to his job as accountant for a big mill owner. When murder brings these two worlds into direct collision, Crocker finds himself the point man. I couldn't put this book down. Fate Moreland's Widow is part mystery, part sociology, part love story, with the best kind of surprising twist at the end—I admit I never saw it coming, though now it seems inevitable."—Lee Smith, author of New York Times best seller The Last Girls

"In this engaging first novel by acclaimed nature writer John Lane, self-proclaimed company man Ben Crocker tells his story, as the overworked, underpaid flunky of a 1930's textile mogul in the Carolina Blue Ridge foothills. The unlovable boss man and his big cruiser have swamped a small boat on the company lake and drowned three people. Among the dead are the husband and child of gorgeous Novie Moreland, dream girl of half the countryside. The young Widow Moreland is nobody's fool, but nobody's paragon either, as smitten Ben must learn. Lane's cautionary tale of land, labor, love, and loyalty is as pertinent today as it was in its Depression era of mill uprisings and shootings."—Dot Jackson, author of Refuge

"John Lane has offered up a cracker jack Southern novel, peopled by interesting characters and anchored in an important time in the Carolinas' history.... Circling between important matters and fantasies that pleasure the secret self is an apt metaphor for the human condition. Few writers describe the dance better than John Lane has done in Fate Moreland's Widow."—Terry Plumb, Rock Hill SC Herald