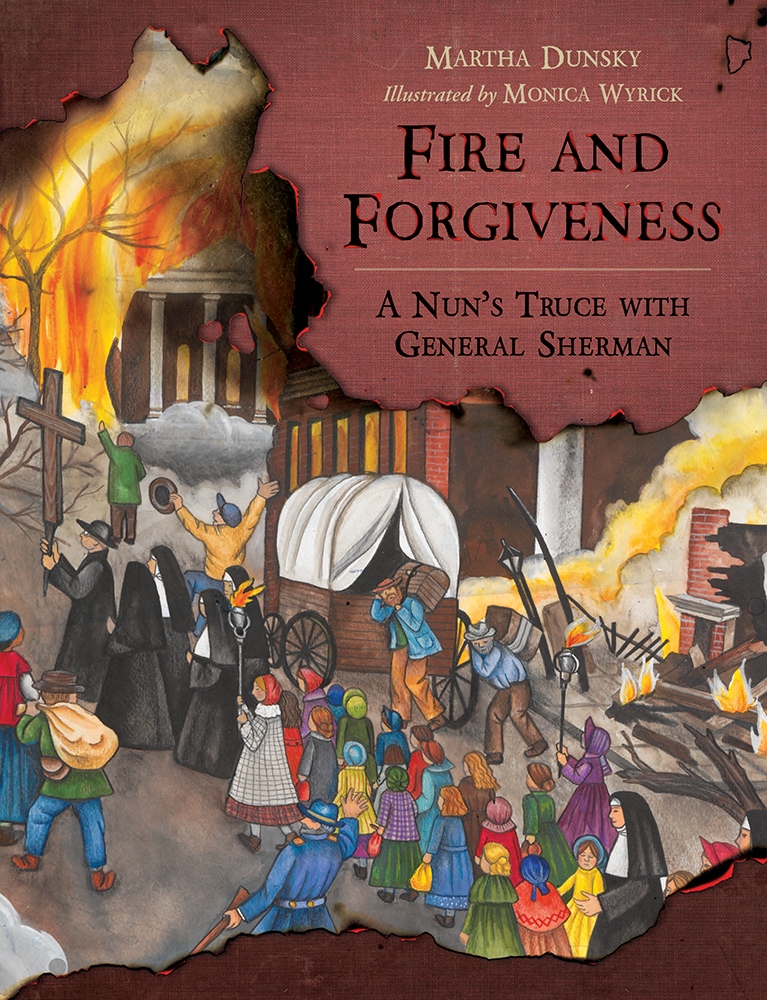 A Nun's Truce with General Sherman

Making peace with her spiteful classmate, Clara, seems impossible to Jane. Despite encouragement from Mother Baptista, the mother superior at their convent school, Jane and Clara dig in their heels. As the girls brood they hear the cannons of the Civil War explode outside their school as General Sherman and the Union army attack the city of Columbia, South Carolina, in February 1865.

Mother Baptista asks Sherman for protection for her nuns and students, and he promises they will be safe inside their convent school. But despite his promise they have to flee in the middle of the night through a chaotic, burning city. Will Mother Baptista forgive Sherman for breaking his promise? Can Jane and Clara make peace when the adults in their world are at odds and at war?

Set during the most deadly and divisive war in U.S. history, this compelling story is based on first-person accounts of true events. Fire and Forgiveness is a reminder of the important role forgiveness and peacemaking play in life's conflicts big and small, whether between quarreling children, proud adults, or warring nations.


Martha Dunsky, a member of the Society of Children's Book Writers and Illustrators, is a former award-winning television reporter/videographer and producer and a retired technical editor for the National Air and Space Intelligence Center.

Monica Wyrick has a fine arts degree from the University of Dayton and has worked in advertising, as a muralist, and as an art instructor. She is the illustrator of Crabbing, Dreaming with Animals, The H. L. Hunley Submarine, and Art Smart, Science Detective, all published by the University of South Carolina Press.

"Fire and Forgiveness is a thoughtful, beautifully illustrated work that emphasizes stories of kindness and mercy during a time of war. The intimate tale reminds us how human goodness can triumph over violence and fear"—Martha Moody, author of Washington Post bestseller Best Friends

"As the Civil War moves closer to Columbia, two girls in a convent school carry on their own battle. It's exciting to see another "forgotten" Civil War story brought vividly to life for today's readers."—Kathy Cannon Wiechman, winner of the 2015 Grateful American Book Prize for Like a River: A Civil War Novel

"As Mother Baptista said, 'If you want to have any peace in this world, it must begin with the children.' Amid the horrors of war, terrified children, and a burning city, Dunsky deftly emphasizes this truth. In addition to all that, it's a page turner!"—Fran Hawk, author of The H. L. Hunley Submarine

"Fire and Forgiveness is a thoughtful, beautifully illustrated work that emphasizes stories of kindness and mercy during a time of war. The intimate tale reminds us how human goodness can triumph over violence and fear."—Martha Moody, author of Washington Post bestseller Best Friends