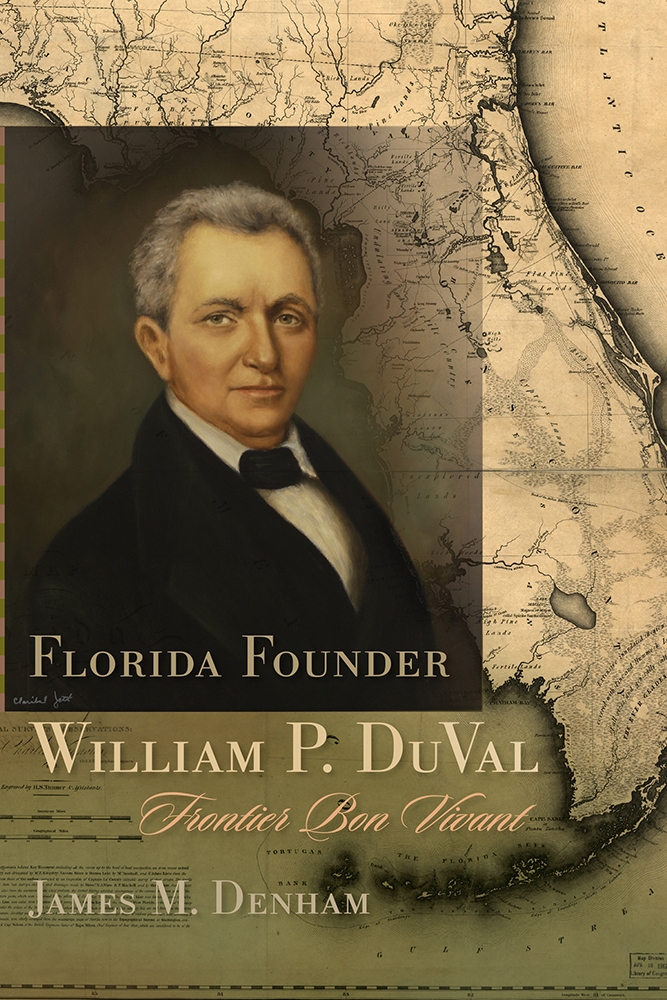 In Florida Founder William P. DuVal, James M. Denham provides the first full-length biography of the well-connected, but nearly forgotten frontier politician of antebellum America. The scion of a well-to-do Richmond, Virginia, family, William Pope DuVal (1784-1854) migrated to the Kentucky frontier as a youth in 1800. Settling in Bardstown, DuVal read law, served in Congress, and fought in the War of 1812.

In 1822, largely because of the influence of his lifelong friend John C. Calhoun, President James Monroe appointed DuVal the first civil governor of the newly acquired Territory of Florida. Enjoying successive appointments from the Adams and Jackson administrations, DuVal founded Tallahassee and presided over the territory's first twelve territorial legislative sessions, years that witnessed Middle Florida's development into one of the Old Southwest's most prosperous slave-based economies. Beginning with his personal confrontation with Miccosukee chief Neamathla in 1824 (an episode commemorated by Washington Irving), DuVal worked closely with Washington officials and oversaw the initial negotiations with the Seminoles.

A perennial political appointee, DuVal was closely linked to national and territorial politics in antebellum America. Like other "Calhounites" who supported Andrew Jackson's rise to the White House, DuVal became a casualty of the Peggy Eaton Affair and the Nullification Crisis. In fact he was replaced as Florida governor by Mrs. Eaton's husband, John Eaton. After leaving the governor's chair, DuVal migrated to Kentucky, lent his efforts to the cause of Texas Independence, and eventually returned to practice law and local politics in Florida. Throughout his career DuVal cultivated the arts of oratory and story-telling—skills essential to success in the courtrooms and free-for-all politics of the American South. Part frontiersman and part sophisticate, DuVal was at home in the wilds of Kentucky, Florida, Texas, and Washington City. He delighted in telling tall tales, jests, and anecdotes that epitomized America's expansive, democratic vistas. Among those captivated by DuVal's life and yarns were Washington Irving, who used DuVal's tall tales as inspiration for his "The Early Experiences of Ralph Ringwood," and James Kirke Paulding, whose "Nimrod Wildfire" shared Du Val's brashness and bonhommie.


James M. Denham is a professor of history and director of the Lawton M. Chiles Jr. Center for Florida History at Florida Southern College in Lakeland, Florida. He is the author of A Rogue's Paradise: Crime and Punishment in Antebellum Florida, 1821–1861, and coauthor of Florida Sheriffs: A History, 1821–1945, as well as two University of South Carolina Press books—Cracker Times and Pioneer Lives: The Florida Reminiscences of George Gillette Keen and Sarah Pamela Williams and Echoes from a Distant Frontier: The Brown Sisters' Correspondence in Antebellum Florida.

"Relying on a variety of sources extending well beyond DuVal's papers, Denham's work provides an intriguing account of a southerner immersed in the dynamics of politics at both the local and national levels. The study will be a definitive must for any student of antebellum regional and national history."—The Journal of Southern History

"Professor Denham has prepared a treat for Territorial Florida historians, and readers who enjoy political history in strong doses will be more than satisfied."—H-Net

"They don't make men like William DuVal any more, which is just as well, since the rambunctious Floridian would have found our staid era confining. James Denham brings DuVal to life in this fascinating study, and in the process goes far toward explaining how Florida became the unique state it is today."—H. W. Brands, professor of history, University of Texas at Austin

"When William Pope Duval died in 1854, an obituary termed him 'a type of the genuine American character.' Indeed he was. A long-serving governor of Florida Territory and a frontier figure whose adventures were immortalized by Washington Irving, Duval struggled in later life to survive in the increasingly strident arena of proslavery politics. As shown by James M. Denham, Duval both witnessed and personified the changes that swept the South and the country in the first half of the 19th century."—Daniel Feller, professor of history, University of Tennessee

"In large brushstrokes, but with great attention to detail, Denham embeds DuVal's life in a wider portrait of the young Republic, and particularly in issues affecting the western states and the former Spanish borderlands Readers will find in this book a well-researched and well-written history that informs on many levels."—The Historian