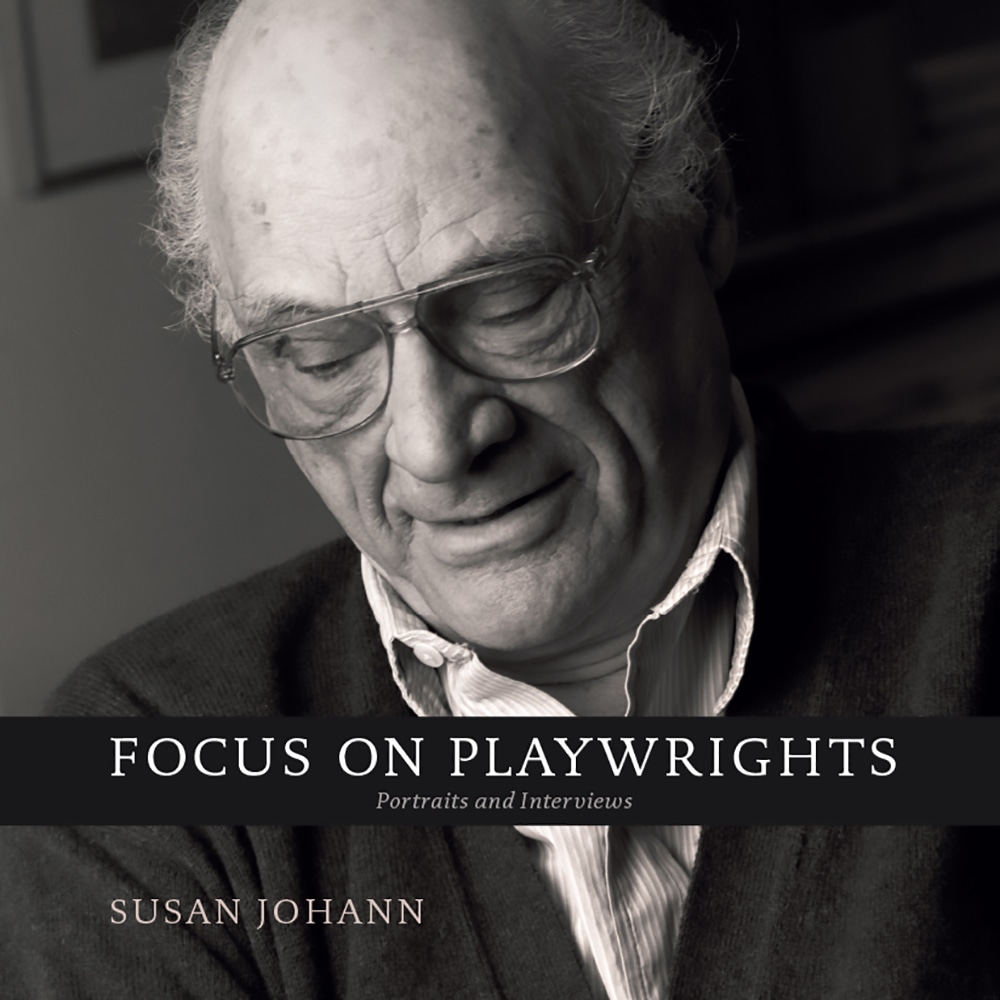 In 1989 Susan Johann was hired to photograph Christopher Durang for a magazine article about his play Naomi in Her Living Room. The playwright was known for his outrageous comedy, so Johann anticipated a session with a rather wild, young eccentric. To her surprise, the man who came to her studio was mild mannered and buttoned down. Johann found this twist captivating, and it was then that this project was born. Over the ensuing twenty-year period, she photographed more than ninety playwrights, including many winners of the Pulitzer Prize and other prestigious awards.

Johann photographed Wendy Wasserstein, Anna Deavere Smith, August Wilson, and Nilo Cruz in the weeks after they won the Pulitzer. Tony Kushner sat for his portrait between the productions of part 1 and part 2 of Angels in America. Eve Ensler came to Johann's studio during the week she was previewing her famous one-woman show, The Vagina Monologues, and George C. Wolfe sat for her the morning after his play Spunk opened at the Public Theater.

Each playwright was photographed in Johann's studio using the same film, a single light, and a plain backdrop, creating a portrait that captures and distills something essential—an intimate view. Her interviews explore the writers' personal and creative journeys including their inspirations, roadblocks, and obsessions, which influenced their work on paper and on the stage. Even those who know Edward Albee's plays intimately, for example, may be surprised by his incisive wit and inimitable voice as revealed in his interview with Johann.

Beyond the book, Focus on Playwrights is also a live, multimedia presentation in which Johann narrates an inside look at creativity—the theater and photography. It has been given at such venues as the New Dramatists in New York, the Eugene O'Neill Theater, the Tryon Fine Arts Center and at the Photo Expo in New York.


The work of award-winning photographer Susan Johann has been featured in galleries and cultural centers throughout the United States, including the Smithsonian Institution's National Portrait Gallery, the Public Theater, Signature Theatre's Pershing Square Center, and the Contemporary American Theater Festival. Her photographs are in public, corporate, and private collections and have been featured in many publications, including the New York Times, Vogue, Harper's Bazaar, the New Yorker, and American Theater Magazine. Johann is married to theater director and former Broadway performer Dallas Johann. Her sons, Cameron and Trevor, live in Los Angeles, where they work in the film industry.

"Susan Johann's 2016 book of photographs, Focus on Playwrights . . . has already attained a time capsule quality: some of her subjects— Edward Albee, Arthur Miller— died either before or not long after publication . . . many of the photos in Focus are augmented by Johann's in-depth, perceptive interviews with writers, creating fully rounded portraits that not only provide insight into the imaginations that spawn masterpieces, but also into the current state of the playwriting art."—Creative Loafing

"Old school' is not a term Susan Johann uses for her work, but it seems fitting for this veteran portrait photographer, whose iconic images of playwrights typically intimate, often contemplative, occasionally playful black-and-white portraits have for more than 20 years crystallized these writer's personalities in the pages of American Theatre and countless other publications with an elegance that brings to mind the names Alvedon, Beaton, Leibovitz."—American Theatre

"Focus on Playwrights is Susan Johann's magnificent collection of the great and greatest playwrights of our time. Johann's portraits are remarkable and important works of art. They capture the spirit and soul of her subjects. Clearly, they trusted her, her camera and even her tape recorder! This book, like no other, captures a unique and historic literary history."—Timothy Greenfield-Sanders, American documentary filmmaker and portrait photographer

"It's not possible to read this book and not fall hard again with your favorite playwright, who is bound to be represented herein. Johann's mastery of her art is as mysterious and inarguable as the mastery these play making magicians exercise in capturing the human soul in their work."—Tim Sanford, artistic director, Playwrights Horizons

"Here's your chance to square off face-to-face with the prime movers of the American theatreits playwrights. Johann's perceptive, persuasive black-and-white images, mainly of faces, feel admiring and intimate, as do the impressionistic texts and mini-interviews that accompany them. The photographer is in constant search of significance . . . as are her subjects."—Jim O'Quinn, founding editor, American Theatre

"Focus on Playwrights is a study in fascination. Susan Johann, captivated by playwrights, has captured them in response: eyes, faces, hands. Then, as though her camera lens weren't enough, she's exposed their thoughts in equally vivid interviews. These portraits are wild with life, because, as the enraptured Johann makes us see, playwrights are wild with it."—Todd London, Floyd U. Jones Family Endowed Chair, School of Drama, University of Washington