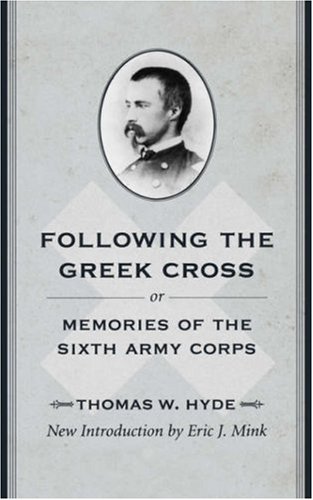 Following the Greek Cross; Or, Memories of the Sixth Army Corps

Thomas W. Hyde, a native of Maine who rose rapidly through the Union ranks and eventually received the Medal of Honor for his actions at the Battle of Antietam, published his portrait of the Army of the Potomac in 1894. More than a mere personal remembrance, Following the Greek Cross tells the story of an illustrious army unit and offers rare glimpses into the Northern perspective on the war and its significance in U.S. history. One of the most cited—and most difficult to find—Union memoirs, this volume returns to print with an expanded edition featuring new information about the author, more than a dozen photographs, and a complete index.

Hyde began his military career in 1861 as a major of the Seventh Maine Infantry Regiment. When that unit became part of the Sixth Corps of the massive Army of the Potomac, Hyde was promoted to a staff post. He served on the staffs of several prominent Union officers, including John Sedgwick and Horatio G. Wright, major generals who between them commanded the Sixth Corps in several important campaigns in the Virginia theater. Hyde's unit was also among those who followed General Lee's army into Pennsylvania and fought at Gettysburg.

In his correspondence Hyde writes engagingly about the war, his fellow soldiers, strategy and tactics, and daily life in the Union forces. He elaborates on their motivation for fighting, the strength of their camaraderie, and their unflagging determination to preserve the Union.

Eric J. Mink's new introduction provides fresh insights on Hyde's origins, perspectives, and postwar achievements, which include the establishment of one of North America's most important shipyards, in Hyde's hometown of Bath, Maine.


Eric J. Mink grew up in Gettysburg, Pennsylvania, and is a graduate of Mary Washington College in Fredericksburg, Virginia. For the past decade he has worked for the National Park Service at battlefield sites on the East Coast. Mink currently is the cultural resources manager at the Fredericksburg and Spotsylvania National Military Park in Virginia.