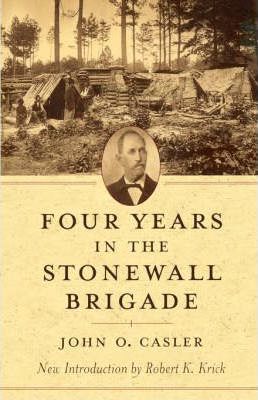 Four Years in the Stonewall Brigade

The classic tale of battle, roguery, and capture from the Army of Northern Virginia

From his looting of farmhouses during the Gettysburg campaign and robbing of fallen Union soldiers as opportunity allowed to his five arrests for infractions of military discipline and numerous unapproved leaves, John O. Casler's actions during the Civil War made him as much a rogue as a Rebel. Though he was no model soldier, his forthright confessions of his service years in the Army of Northern Virginia stand among the most sought after and cited accounts by a Confederate soldier. First published in 1893 and significantly revised and expanded in 1906, Casler's Four Years in the Stonewall Brigade recounts the truths of camp life, marches, and combat. Moreover, Casler's recollections provide an unapologetic view of the effects of the harsh life in Stonewall's ranks on an average foot soldier and his fellows.

A native of Gainesboro, Virginia, with an inherent wanderlust and thirst for adventure, Casler enlisted in June 1861 in what became Company A, 33rd Virginia Infantry, and participated in major campaigns throughout the conflict, including Chancellorsville and Gettysburg. Captured in February 1865, he spent the final months of the war as a prisoner at Fort McHenry, Maryland. His postwar narrative recalls the realities of warfare for the private soldier, the moral ambiguities of thievery and survival at the front, and the deliberate cruelties of capture and imprisonment with the vivid detail, straightforward candor, and irreverent flair for storytelling that have earned Four Years in the Stonewall Brigade its place in the first rank of primary literature of the Confederacy.

This edition features a new introduction by Robert K. Krick chronicling Casler's origins and his careers after the war as a writer and organizer of Confederate veterans groups.


Robert K. Krick was for thirty years the chief historian at Virginia's Fredericksburg and Spotsylvania National Military Park. He is the author or editor of numerous books, including Stonewall Jackson at Cedar Mountain and The Smoothbore Volley That Doomed the Confederacy.