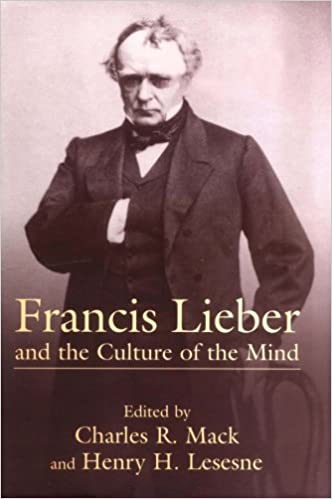 Francis Lieber And The Culture Of The Mind

The subject of growing scholarly appreciation and interest, Francis Lieber (1798-1872) gained international renown as one of nineteenth-century America's preeminent public intellectuals. He is also recognized as one of the most distinguished faculty members in the University of South Carolina's institutional history. With Francis Lieber and the Culture of the Mind, Charles R. Mack and Henry H. Lesesne draw together an international group of scholars from fields as diverse as Lieber's own multifaceted interests—cultural studies, history, law, linguistics, art history, philosophy, religion, and political science—to commemorate and reevaluate the German-American thinker's legacy to the twenty-first century.

A testament to Lieber's pioneering interdisciplinary spirit, the essays investigate the major concerns of his political and moral philosophy, his interpretations of the U.S. Constitution, and his impact on international law and military conduct, as well as address his less studied interests in aesthetics and linguistics. Collectively these essays are a cogent introduction to the celebrated scholar and to the pervasive influence of his ideas on our world.


Charles R. Mack is a Louise Fry Scudder Professor of Liberal Arts and the William Joseph Todd Professor of the Italian Renaissance at the University of South Carolina. He is coeditor of Like a Sponge Thrown into Water: Francis Lieber's European Travel Journal of 1844–1845 and The Roman Remains: John Izard Middleton's Visual Souvenirs of 1820–1823, and the author of Looking at the Renaissance and Pienza: The Creation of a Renaissance City, and Paper Pleasures: Five Centuries of Drawings and Watercolors.