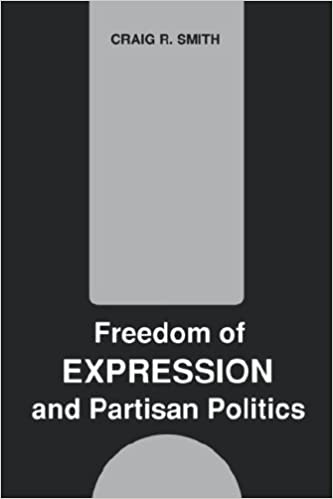 Freedom of Expression and Partisan Politics

Examines the history of tensions and the contemporary environment of freedoms, rules and regulations in the political realm

The First Amendment was the first time a government guaranteed freedom of expression to its citizens in writing. In our democratic system, that freedom has led to conflict and tension. This book examines first the history of tensions and then the contemporary environment of freedoms, rules and regulations in the political realm. The history of tensions begins by analyzing philosophical confrontation in political discourse. The two case studies used as models are the confrontations between Puritan preachers and evangelists, and between Populists and Social Darwinists. The study then turns to tensions surrounding the question of national security. The three cases examined include the Alien and Sedition crisis, the post-Civil War Radical Republican legislation, and the McCarthyist period. The second half of the book looks at the contemporary environment, in particular, campaign persuasion is analyzed in terms of how regulations on campaign spending affect freedom of expression. Second, content regulations imposed on the electronic media are discussed. Third, disguised persuasion in the form of movies and television news is examined with an eye to revealing the hidden strategies of persuasion latent in those forms of communication. The book concludes by recommending an open system of political persuasion even though abuses of the system have provided its critics with arguments for change.

Craig R. Smith is a professor of speech communication at California State University, Long Beach, and president of the Freedom of Expression Foundation. He has served as a political speechwriter for President Gerald Ford, campaign manager for Senator Bob Packwood, and as a consultant to George Bush's presidential campaign.

"After reading Freedom of Expression and Partisan Politics, I am convinced that few works could do more to open the eyes of voters to the new technologies of political persuasion and the regulations that control them. I hope those who read this work will pass their understanding on to others thereby bringing us a step closer to Jefferson's dream of a responsive and responsible electorate"—Bob Packwood, U.S. Sentor, Oregon