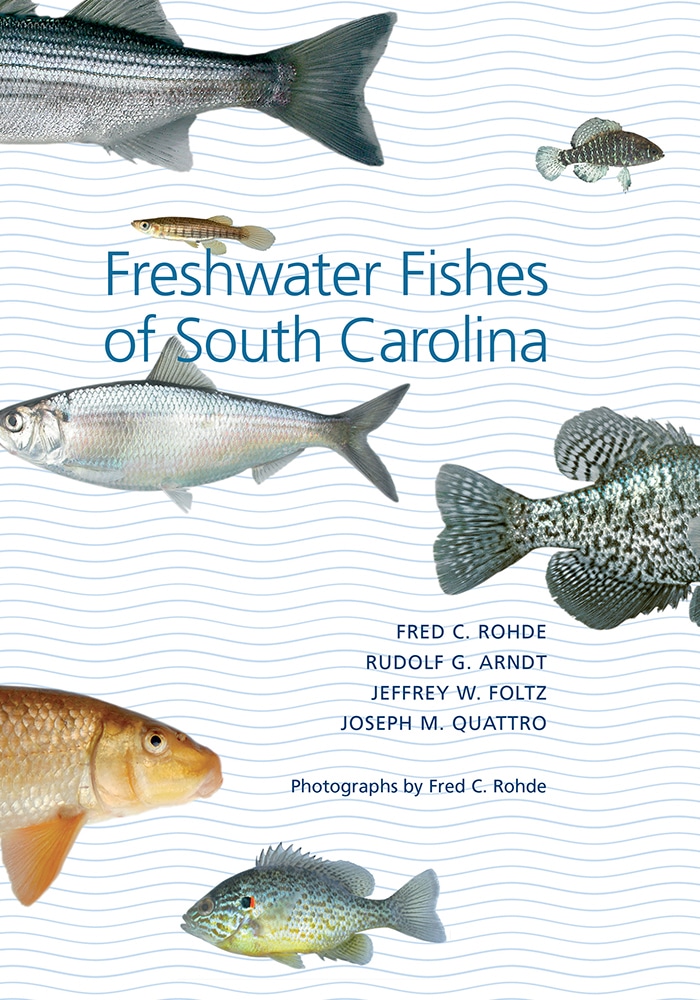 A scientific milestone, this comprehensive illustrated guide to the characteristics, distribution, and ecology of freshwater fishes in South Carolina marks the first endeavor since 1860 to document this aspect of the Palmetto State's diverse natural history.

Freshwater Fishes of South Carolina is the result of long-term collaboration between a quartet of leading experts on the state's freshwater fishes—Fred C. Rohde, Rudolf G. Arndt, Jeffrey W. Foltz, and Joseph M. Quattro. From mudminnows and sunfishes to lampreys and sturgeons, the guide describes more than one hundred fifty species of freshwater and coastal estuarine fishes that spend all or major portions of their lives in the fresh waters of South Carolina. For each species the authors provide diagnostic characteristics including size, markings, similar species, and sexual dimorphism as well as information on biology, habitat, and distribution. Color photographs and detailed distribution maps accompany each description. The volume also includes a history of ichthyology in South Carolina, a chapter on methods for the collection and identification of fishes, and a chapter on conservation biology documenting species of concern and reasons for their decline.

This handsome reminder of the rich biodiversity in South Carolina's rivers, streams, and lakes serves not only as a vital scientific tool for marine researchers, students, resource managers, ecologists, and state policy makers but also as a valuable resource for sportsmen and natural history enthusiasts across the region.

Rudolf G. Arndt is a professor emeritus and an adjunct professor of marine science at the Richard Stockton College of New Jersey, where he has taught since 1974. He is also a coauthor of Freshwater Fishes of the Carolinas, Virginia, Maryland, and Delaware.

Jeffrey W. Foltz is a professor of fisheries at Clemson University, where he has taught since 1978.

Joseph M. Quattro is an associate professor of biological and marine sciences at the University of South Carolina. He has studied the evolutionary history of Carolina fishes and taught ichthyology since 1995.

"This is the most comprehensive book on the freshwater fishes of South Carolina ever done. The presentation is easy to follow and the contents form a wonderful combination of many resources: good keys and illustrations for identification, color photographs of each species, precise up-to-date range maps geared to river drainages and physiographic provinces, a glossary of terms, a helpful index, and an exhaustive bibliography. The informative history of ichthyology in South Carolina is an added bonus. The authors are to be commended for having produced the best book on this subject that I have ever seen."—Rudy Mancke, distinguished lecturer in natural history, University of South Carolina

"Freshwater Fishes of South Carolina easily exceeds the comprehensiveness of scope of other works on our state's freshwater fishes. An indispensible reference, this book is the most authoritative compilation of information on the freshwater fishes of the state. It's a must for natural resource managers in government and private sectors and a treasure trove for fisheries enthusiasts."—John E. Frampton, director, South Carolina Department of Natural Resources

"Freshwater Fishes of South Carolina is an excellent reference for both general and scientific audiences. A volume covering the state's freshwater fishes has been needed for many years and this work fills that need perfectly. The detailed information and distribution maps are particularly useful in field research. The volume's history of ichthyology in South Carolina is also helpful in making the science more accessible to readers. South Carolina's rivers and streams and the animals that live in them face many threats. Works like this one are essential to illuminating the tremendous biodiversity to be found in this state and to inspiring the preservation efforts."—Whit McMillan, director of education, South Carolina Aquarium