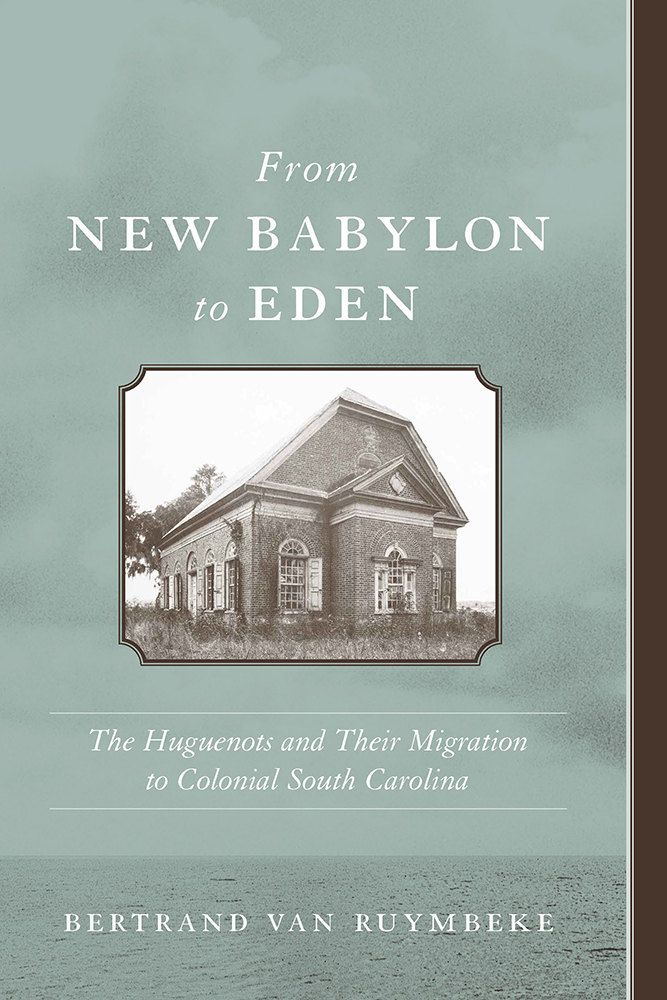 From New Babylon to Eden

The Huguenots and Their Migration to Colonial South Carolina

Winner of the National Huguenot Society's 2007 Book of the Year award, From New Babylon to Eden traces the persecution of Huguenots in France and the eventual immigration of a small bloc of the French Calvinist population to proprietary South Carolina. Once there, rather than isolate themselves as a separate religious and cultural enclave, they chose instead to integrate into the Southern strain of nascent Anglo-American society. Through intermarriage and adaptation to the new economic, religious, and political environment, Huguenots soon numbered among the most influential and successful colonists and have left a persevering legacy throughout Charleston and the lowcountry. In a volume devoted to the first generation of Carolina Huguenots, Bertrand Van Ruymbeke describes in detail their gradual transformation from French refugees to South Carolina planters.

Van Ruymbeke recounts the escalating persecution that led to the Huguenot exodus from France and tells how approximately five hundred émigrés settled in South Carolina. He credits their decision to relocate to the vigorous marketing efforts of the Lords Proprietors, the owners and rulers of the province, who promised the French Calvinists a veritable Eden. The Huguenots quickly discovered the colony was not paradise, but they adapted to the new environment by abandoning their Old World silk, olive oil, and wine trades for the more lucrative pursuits of Indian trade, cattle ranching, and rice planting.

Placing the Carolina migration in the context of the larger Huguenot diaspora, Van Ruymbeke proffers an account that challenges accepted history. Describing their settlement as a process of acculturation and creolization rather than simply assimilation, he contends that the majority of these French Calvinists sought to create their own churches but were thwarted by an Anglicized elite eager to dominate Anglo-Carolinian society. He also reveals that most members of the initial generation were moderately—not exceptionally—prosperous and that it was their descendants who acquired the wealth often associated with lowcountry Huguenots. Van Ruymbeke concludes with an epilogue describing the Huguenot legacy in South Carolina.


Bertrand Van Ruymbeke is a professor of American civilization at the Universitè de Vincennes-Saint-Denis (Paris VIII) and a former visiting professor at the College of Charleston. He is the coeditor of Memory and Identity: The Huguenots in France and the Atlantic Diaspora and has published in the fields of Huguenot history, early American history, and Atlantic history.

"Bertrand Van Ruymbeke is perhaps the leading scholar of colonial British America and his book, From New Babylon to Eden, represents a major addition to early modern European migration studies. Notable for its exploration of the factors that drove the French Protestants to flee their country in massive numbers during the closing decades of the seventeenth century, the volume is clearly the best case study of the lives of these people in South Carolina, one of their principal destinations in America. Lucidly written, thoroughly researched, and persuasively argued, this study will be essential reading for all serious students of the formation of the early modern Atlantic world. It is indeed a praiseworthy achievement."—Jack P. Greene, Andrew W. Mellon Professor in the Humanities Emeritus, Johns Hopkins University

"Van Ruymbeke provides us with a fuller picture of the Huguenot emigration as experienced on both sides of the Atlantic than we've ever had before. His portrait is rich with new and significant discoveries, from his superior command of French sources to his diligent research into South Carolina records. From New Babylon to Eden grants us a compelling view of the Huguenots' arrival and remarkable experience in South Carolina."—Jon Butler, Howard R. Lamar Professor of History and Dean of the Graduate School of Arts and Sciences, Yale University

Winner of the 2007 Book of the Year Award, National Huguenot Society