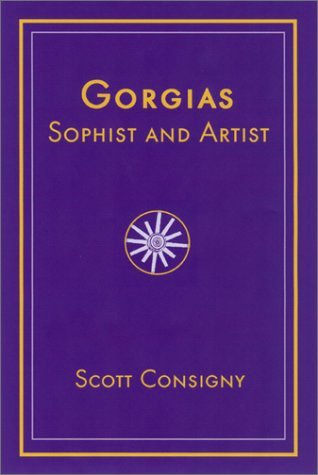 A critical reevaluation of the words of a classical thinker

Of the ancient Greek Sophists, Gorgias of Leontini (ca. 483-ca. 376 b.c.e.) has endured more than his share of insistent detractors. Aristophanes depicted him as a barbaric sycophant, Plato considered him an opportunistic charlatan indifferent to truth and morality, and Aristotle saw him as a gaudy but inept stylist.

Scott Consigny joins the commentators who find merit in Gorgias's thought, but his perceptions of Gorgias differ from those of the two most influential efforts at rehabilitation. He maintains that both the "subjectivist" reading by Hegel and the "empiricist" reading by George Grote—and among the rhetoricians of today by Richard Enos and Edward Schiappa—grant too much to Plato and Aristotle at the same time that, like most current interpretations of Gorgias, they fail to take into account all the extant remarks by the Sophist. By viewing Gorgias as in more radical disagreement with Plato and Aristotle than the other rehabilitators do, Consigny brings order to the Sophist's elusive, enigmatic ideas and peculiar style and stations him as a seminal philosopher and skilled artist, a formidable rival to Plato and Parmenides.

On Consigny's reading, Gorgias is an antifoundationalist who repudiates the idea that knowledge and truth must be grounded in objective standards or in subjective certainty but instead views truth as a category that a community employs to endorse what it finds persuasive. Consigny's reading is one development of Stanley Fish's assertion that "modern antifoundationalism is old Sophism writ analytic," and he pursues his insight into Gorgias's moral and political philosophy, where he sees antifoundationalism manifesting itself in a conventionalist ethic and the advocacy of a peaceful competition among different societies. In Gorgias's notorious style Consigny detects a playful mocking of the genres in which his contemporaries worked but the serious underscoring of the rhetoricity of all texts.


Scott Consigny is an associate professor of English at Iowa State University in Ames. The author of numerous articles on rhetorical and literary theory, he has published in Philosophy and Rhetoric, Rhetoric Review, and the Rhetorical Society Quarterly, among other journals in the field.