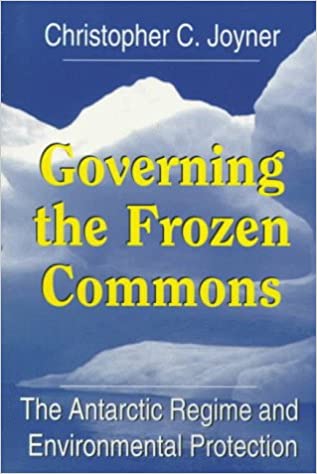 The Antarctic Regime and Environmental Protection

Assesses the international community's management of Antarctica as a global commons

Antarctica, the last great wilderness on earth, is a continent of extremes. It is the coldest, highest, driest, windiest, remotest, most desolate place on the planet. Yet despite these profoundly forbidding characteristics the Antarctic commons has attracted increasing political, economic, and diplomatic attention in recent years. This interest has been stimulated by the tremendous bounty of living marine resources, concern over ozone depletion and environmental degradation, and exaggerated public speculation about the potential of exploiting mineral wealth, especially hydrocarbons, on and around the continent. Governing the Frozen Commons examines the Antarctic Treaty System as a complex legal regime for managing resource activities in the Antarctic and assesses what innovative legal arrangements might be needed to regulate future political and economic developments there. In this study, Christopher C. Joyner analyzes a number of critical considerations affecting the circumpolar south, including the status of Antarctica as a global commons; the legal regime currently in place for managing Antarctic affairs; the legal, economic, and political implications of applying a common heritage of mankind regime to the Antarctic; the viability of the legal regimes now established for resource management, conservation, environmental protection, and scientific investigation in the Antarctic; and the prospect that Antarctica might be considered a world park.

Specific attention focuses on the relevance for Antarctica of several legal regimes, particularly those concerning conservation and management of natural resources on and around the continent. Using this conceptual framework, the study critically assesses broad policy-oriented concerns for the Antarctic: the scope of sovereignty implications for Antarctica as a global commons area; the Antarctic Treaty regime as it relates to the evolving law of common space regimes; regional resource management and conservation in circumpolar Antarctic seas; and environmental protection and preservation of the Antarctic ecosystem.


Christopher C. Joyner is a professor of international law in the Department of Government at Georgetown University in Washington, D.C.

"This excellent book, which presents the best description and analysis of the Antarctic Treaty System thus far written, will be a standard source. Highly recommended for academic and large public libraries."—Choice