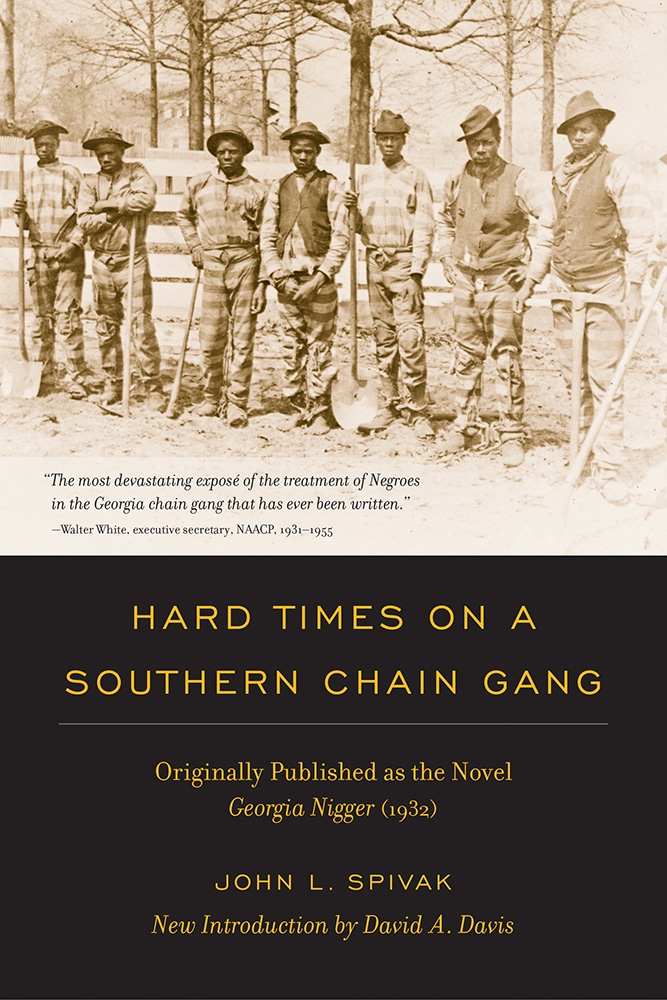 The New York Times praised Communist Party reporter John L. Spivak's shocking 1932 novel Georgia Nigger as having "the weight and authority of a sociological investigation." This Southern Classics edition makes Spivak's narrative available to modern readers, augmented with a new introduction by David A. Davis as well as additional documents Spivak gathered during his investigation into the abuses of the Depression-era Southern prison system.

The novel exposes the institutionalized system of sharecropping, debt peonage, and exorbitant chain gang sentences that trapped many southern black men in a cycle of labor exploitation. Spivak (1897-1981) gained unlikely access to chain gangs through the Georgia Prison Commission, and his book combines elements of muckraking reportage and proletarian fiction to offer a sensational and damning case for prison reform.

The plot follows David Jackson, the son of black sharecroppers, who is released from a chain gang then almost immediately re-arrested and bound over to a white planter as a peon. Jackson escapes peonage only to be arrested again as a vagrant and sentenced to another chain gang. He tries to escape again with the help of an older inmate, but they are both captured and suffer torturous punishments. Spivak's novel has merit both as revealing historical account of sharecropping and chain gangs and as a compelling literary allegory of an individual confronted by sweeping social forces.

For Depression-era readers, Georgia Nigger provided outrage beyond its obvious depictions of inhumanity and torture. The book hinges on the crime of vagrancy, a charge often used to force into labor persons without obvious means of income. In this particular arrangement, being unemployed was a crime in itself, which allowed for the exploitation of the economically vulnerable. Like many writers and intellectuals of his era, Spivak sought to expose the abuses committed against the nation's most impoverished. His book combines elements of labor rabble-rousing, radical fiction, and documentary photography to depict the lives of black Southerners and to indict a flawed system of labor and justice.


David A. Davis is an assistant professor of English and Southern studies at Mercer University in Macon, Georgia. He has published articles on southern literature and culture in the African American Review, Mississippi Quarterly, Southern Literary Journal, and elsewhere.

"The most devastating exposé of the treatment of Negroes in the Georgia chain gain that has ever been written."—Walter White, executive secretary, National Association for the Advancement of Colored People, 1931–1955

"Georgia Nigger is a challenge to the humanitarians of the twentieth century as Uncle Tom's Cabin was to the nineteenth."—Journal of Negro History (1933)