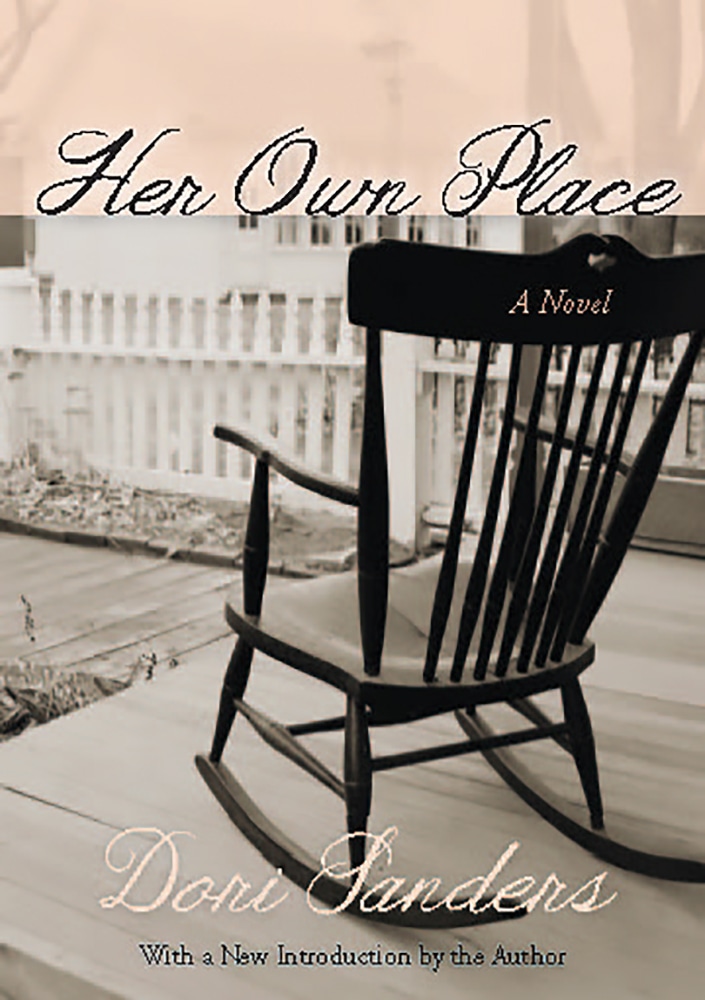 Her Own Place traces the life and times of Mae Lee Barnes, an African American woman from rural South Carolina. The novel begins with Mae Lee's life as a teenager in the 1940s and follows her eventual marriage to her boyfriend, Jeff Barnes, who proposes before going off to fight in World War II. While Jeff is in the army, Mae Lee works rotating shifts at a local munitions plant and saves every penny she can to purchase a small farm. When Jeff returns from the war, he alternates between spending time on the farm and going to find work in the city, and eventually the family decides to start a new life in the city together. The day their new life is to begin, Jeff abandons Mae Lee and their five children, and the story traces Mae Lee's struggles and triumphs after Jeff leaves, including her challenges as a single parent on a working farm, her life after her children are grown, the realities of racial integration in the South, and the realization that her memory is slipping away.

Dori Sanders grew up near York, South Carolina, where she still lives. Sanders is also the author of the novel Clover—winner of the Lillian Smith Award— and a cookbook, Dori Sanders' Country Cooking. She lives on her family's land, one of the oldest black-owned farms in the country, and divides her time between public speaking appearances and managing the Sanders' Peach Shed

"Somewhere in the first five pages of Her Own Place the glow begins. . . . And you begin to glow because it just feels so good."—Boston Globe

"Ms. Sanders' writing [is] sweet, genuine, comic, unsentimental but eternally forgiving. . . . Indeed, something to delight in, a fresh wind above the stale cynicism that spoils so much of contemporary literature."—Dallas Morning News

"This story belongs to Mae Lee Barnesand reflects a life punctuated by the births, graduations, weddings and deaths that shape our memories. . . . But this is more than the success story of one indomitable black matriarch. Sanders sets her novel during times of changes, inviting us to speculate on the broader implications of the social realignment brought on by the civil rights movement. . . . Sanders writes in a vernacular she can understand, about a lifestyle she knows intimately. . . . A voice that should appeal to anyone."—Washington Post

"Moves at the gentle, timeless pace of a work by Willa Cather. . . . Her Own Place is about Mae Lee Barnes, who matures from a rural South Carolina teenager, all buckled knees for her high school sweetheart, to an abandoned mother of five whose fierce reserves and constant humor help her family to prosper."—New York Times

"A life story that seems to hum along so simply it takes a while to notice that it resonates as powerfully as an old hymn. . . . Small, sharp truths and day-to-day details add up to a story that's larger than life here—that's the cipher of fine writing."—Kirkus Reviews

"A salute to the extraordinary in ordinary lives and a delightful reading experience."—Library Journal

"Beautiful and beautifully crafted, Sanders brings her story up to the present, along the way enabling readers to savor the changes in Mae Lee and the Southern world around her. That she endures so successfully is part of the triumph of Sanders' book with its finely proclaimed victory over the adversity that all readers will know and identify with."—Columbia (S.C.) State

"Sanders is a master storyteller, and she spins this yarn both seamlessly and effortlessly. . . . With homey, but shimmering, imaginative metaphors, she portrays the small truths and little miracles of everyday life. Mae Lee Barnes, a woman of indomitable spirit, will capture the reader's heart and touch the soul."—Charleston (S.C.) Post & Courier