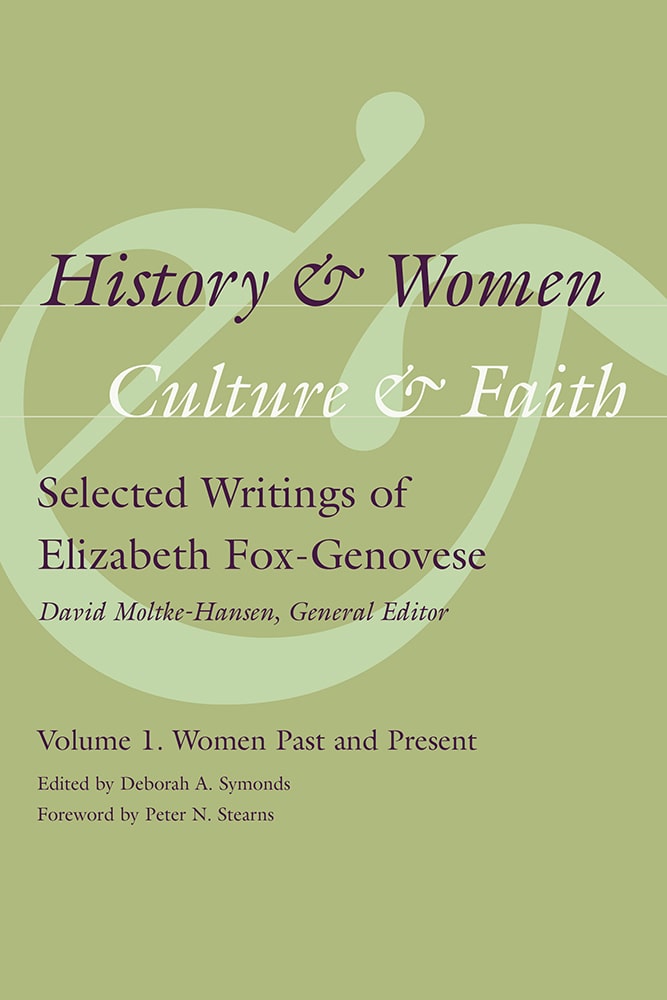 Selected Writings of Elizabeth Fox-Genovese: Women Past and Present

edited by Deborah A. Symonds
foreword by Peter N. Stearns

History and Women, Culture and Faith is a five-volume collection of eighty essays and journal articles spanning the extraordinary intellectual career of Elizabeth Fox-Genovese (1941-2007). A working scholar for more than three decades, Fox-Genovese made significant contributions to European and American Southern history and became one of the most provocative scholars and educators of her time as she evolved intellectually from a Marxist to a feminist to a prolife Roman Catholic. Although she authored or coauthored ten well-received books, her prolific output as an essayist is less well known. This multivolume collection celebrates the scope of her scholarship and invites a fresh assessment of her legacy and influence.

After completing her first book in the late 1970s, Fox-Genovese turned her attention to the history of women in Europe, and, over the next thirty years, she emerged as a central and controversial figure in women's studies. Published together for the first time, the nineteen essays in Women Past and Present reflect Fox-Genovese's influential development as a historian of women, a feminist, and an individual who was not afraid to challenge her own previously held ideas. While the essays span Fox-Genovese's changing ideology, they also give readers the chance to view Fox-Genovese's work and scholarship as a coherent whole.

Throughout these essays, Fox-Genovese demonstrates a commitment to women's needs, to the study of both women in history and women's texts, and to the claims that society has on female and male individuals. Always informed by a historical perspective, her discussion is sometimes explicitly historical, as in "Property and Patriarchy" and "Women's History in History." In other instances her focus is more contemporary, as in "Feminism and the Rhetoric of Individual Rights" and "Beyond Autonomy." In every case, however, her trenchancy of argument, impressive erudition, and informed passion command serious attention. In her searching introduction, Deborah A. Symonds maps the trajectory of Fox-Genovese's career and the extensive historical and social engagements of Fox-Genovese's scholarship.

Volume 1 also includes a foreword by Peter N. Stearns, provost and professor of history at George Mason University and editor in chief of the Journal of Social History.


A professor of history at Drake University, Deborah A. Symonds earned her Ph.D. from Binghamton University, where Elizabeth Fox-Genovese directed her dissertation. The author of two books, Symonds continues to work on early modern Scottish culture, economy, and women.

"Deeply intelligent, provocative, and morally engaged, Elizabeth Fox-Genovese's essays on women raise enduring questions about the individualist construction of the self and the paradoxes of gender likeness and difference. Readers will find fascinating Fox-Genovese's sustained belief in ideals of social responsibility and her continuing attention to class difference as she moves from a Marxist frame to one of Catholic faith. If Fox-Genovese's views of 'feminists' can be challenged—as Peter Stearns points out in his valuable introduction—these essays will arouse readers to a debate in fresh terms. Elizabeth Fox-Genovese's voice is stilled, alas, but Women Past and Present reminds us, in her words, of the 'conflict, ambiguity, and tragedy [at] the center of historical process."—Natalie Zemon Davis, author of Women on the Margins: Three Seventeenth-Century Lives