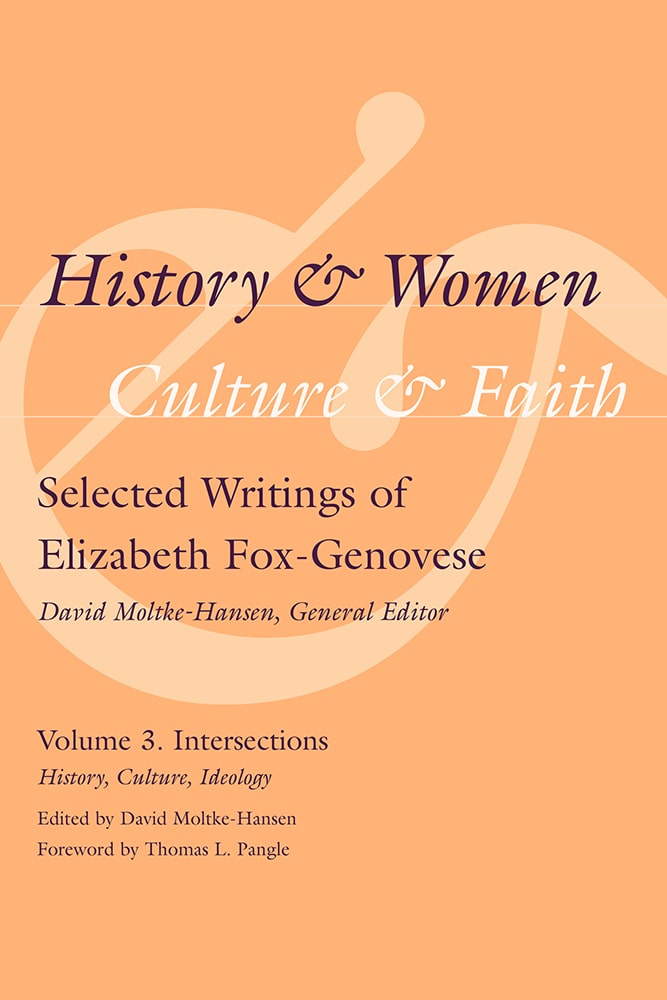 History and Women, Culture and Faith is a five-volume collection of eighty essays and journal articles spanning the extraordinary intellectual career of Elizabeth Fox-Genovese (1941-2007). A working scholar for more than three decades, Fox-Genovese made significant contributions to European and southern American history and became one of the most provocative scholars and educators of her time as she evolved from a Marxist to a feminist to a prolife Roman Catholic. Although she authored or coauthored ten well-received books, her prolific output as an essayist is less well known. This multivolume collection celebrates the scope of her scholarship and invites a fresh assessment of her legacy and influence.

Offering entry into Fox-Genovese's most enduring concerns throughout her lifetime, Volume 3, Intersections: History, Culture, Ideology, challenges readers to examine with the author the emergence of bourgeois hegemony and relationships of gender, class, and power through a series of eighteen reflective essays. Written over the course of three decades, and including Fox-Genovese's first published essay, this volume integrates often conflicting models of thought—Marxism, feminism, psychoanalysis, and postmodernism—to dissect power relationships and other social mechanisms that create human culture.

Incorporating examples from eighteenth-century French and Southern American history, Fox-Genovese dissects the emergence of and threats to a common culture, guided by the growth of bourgeois social forces, capitalism, and feminism. The essays begin with a critique of French Physiocratic economics and its application to European power structures. Additional essays survey a range of topics from literary analysis of Southern intellectuals such as Augusta Jane Evans Wilson and Henry Timrod to threats of multiculturalism to the teaching of an expanded and revised Western civilization "canon." Seeking to identify cultural standards and familial relationships in an early modern society, Fox-Genovese examines the commodification of the individual woman with "The Empress's New Clothes: The Politics of Fashion." The commodification of "motherhood" and "sisterhood" is further explored within additional essays.

Fox-Genovese's focus on large social questions and the theoretical underpinnings and consequences of different approaches to those questions, combined with her range of subjects, provides readers with distinctive and enduring scholarship.

Volume 3 also includes a foreword by Thomas L. Pangle, the Joe R. Long Chair in Democratic Studies in the Department of Government at the University of Texas and the codirector of the Thomas Jefferson Center for the Study of Core Texts and Ideas.

"Both the analytical brilliance and the extraordinary erudition and range of Elizabeth Fox-Genovese are amply demonstrated in this remarkable collection. Underpinning all of the essays, however diverse, is the author's moral clarity and search for the common good. Intersections offers a wonderful entrée to the work of one of the great intellectuals of our time. Thomas L. Pangle's provocative foreword and David Moltke-Hansen's excellent introduction on Fox-Genovese as essayist further enhance the collection's appeal."—Peter A. Coclanis, Albert R. Newsome Distinguished Professor of History, UNC-Chapel Hill