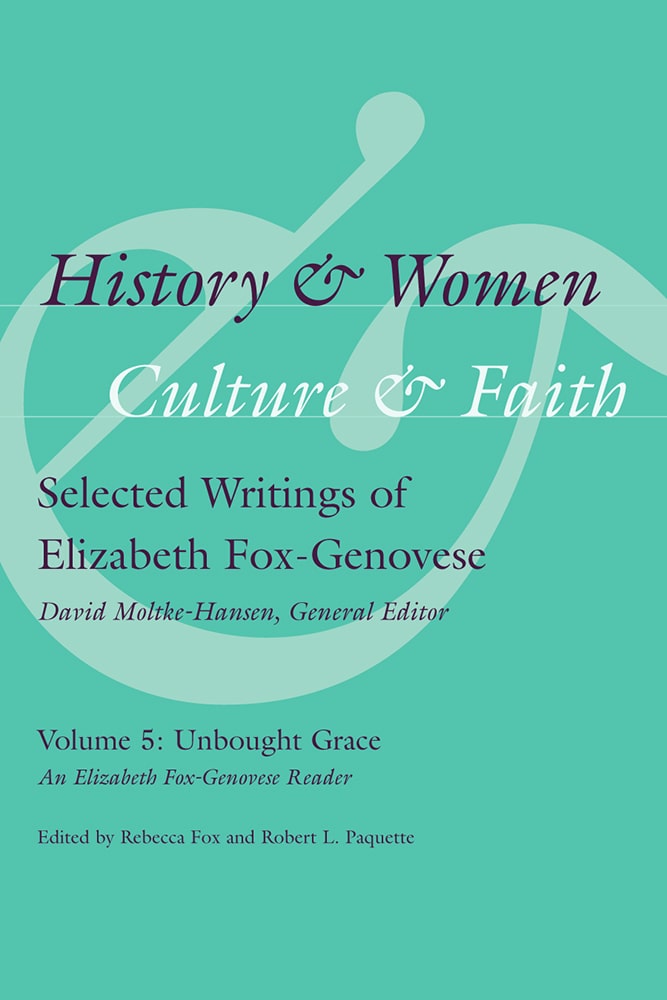 History and Women, Culture and Faith is a five-volume collection of eighty essays and journal articles spanning the extraordinary intellectual career of Elizabeth Fox-Genovese (1941-2007). A working scholar for more than three decades, Fox-Genovese made significant contributions to European and Southern American history and became one of the most provocative scholars and educators of her time as she evolved intellectually from a Marxist to a feminist to a pro-life Roman Catholic. Although she authored or coauthored many well-received books, her prolific output as an essayist is less well known. This multivolume collection celebrates the scope of her scholarship and invites a fresh assessment of her legacy and influence.

Concluding this multivolume series of Fox-Genovese's fugitive works, Unbought Grace: An Elizabeth Fox-Genovese Reader draws on earlier volumes in the series to provide an overview of fundamental intellectual concerns that shaped her writings. Divided into two parts—sixteen essays written by Fox-Genovese and ten remembrances of her life—the contents of this volume demonstrate her remarkable range of subjects, methods, and audiences as she examined both historical and contemporary issues.

The volume at the same time reflects persistent issues and themes running through Fox-Genovese's work, and her life journey from Marxism and feminism to Roman Catholicism. As her perspectives evolved, Fox-Genovese reexamined and refined previous arguments about many of these issues and themes: power imbalances for marginalized populations, the rise of bourgeois hegemony, Lockean individualism and liberalism, feminism, religion, and a moral economy.

Remembrances of Fox-Genovese, written by colleagues and former students, conclude the book. Providing insight into her personal and professional relationships, these remarkable accounts allow the reader to understand better the woman behind the nuanced and thought-provoking essays.

Demonstrated through her own words and in the remembrances, Elizabeth Fox-Genovese's life reflected more continuity than change. Her legacy is a remarkable wealth of academic knowledge, vigorous and complex moral arguments, and, most of all, a life lived searchingly through her embrace of a deep, abiding faith that defined her scholarship and personal life.

Robert L. Paquette is cofounder of the Alexander Hamilton Institute for the Study of Western Civilization in Clinton, New York, the author of Sugar Is Made with Blood (winner of the Elsa Goveia Prize for the best book in Caribbean history), and coeditor of The Oxford Handbook of Slavery in the Americas.

"Honoring a deceased colleague can be a labor of love as well as scholarship. Unbought Grace: An Elizabeth Fox-Genovese Reader accomplishes this balance admirably through sixteen selected writings of Fox-Genovese and ten remembrances of her from an accomplished group of scholars. One result of this worthy project is to position Fox-Genovese for comparison with other scholars and commentators on women—from Southern historians Drew Faust and Florence King to theoretical historian Griselda Pollock to international analysts Juker Tati Imam Muhni, Miriam Cook, Ernestine Friedl, Louly Konz, Catherine Bateson, Claire Raymond, and Johnetta Cole. Through important works like this one, Fox-Genovese's viewpoints continue to enrich the study of women and related topics in the South and beyond. We should be deeply grateful to general editor David Moltke-Hansen and to the editors of this remarkable volume."—Dr. James Peacock, Kenan Professor of Anthropology, University of North Carolina at Chapel Hill