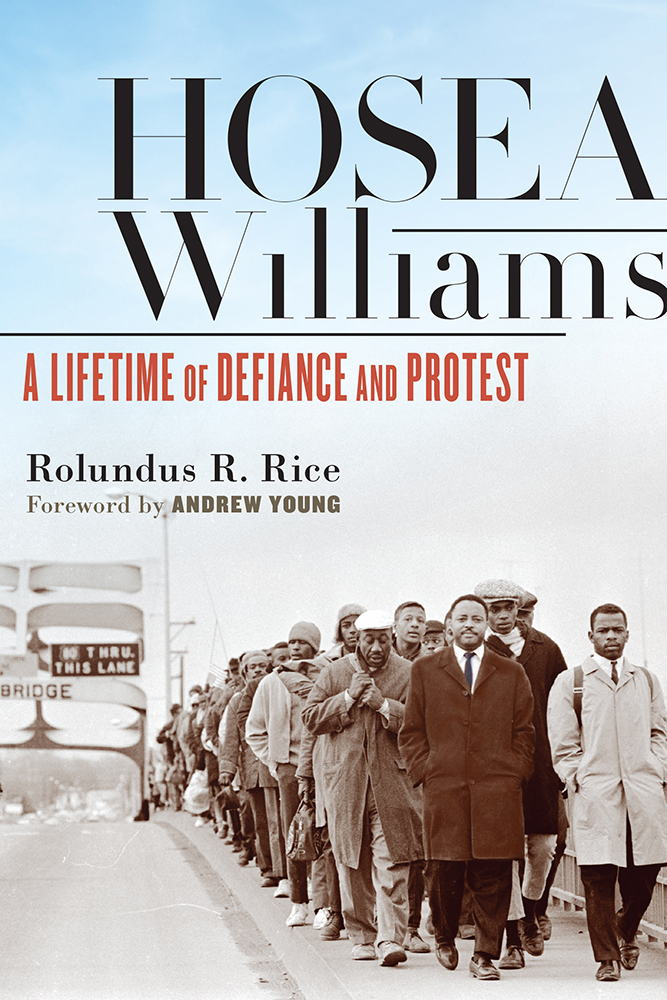 A Lifetime of Defiance and Protest

When civil rights leader Hosea Lorenzo Williams died in 2000, U.S. Congressman John Lewis said of him, "Hosea Williams must be looked upon as one of the founding fathers of the new America. Through his actions, he helped liberate all of us."

In this first comprehensive biography of Williams, Rolundus Rice demonstrates the truth in Lewis's words and argues that Williams's activism in the Southern Christian Leadership Conference (SCLC) was of central importance to the success of the larger civil rights movement. Rice traces Williams's journey from a local activist in Georgia to a national leader and one of Martin Luther King Jr.'s chief lieutenants. He helped plan the Selma-to-Montgomery march and walked shoulder-to-shoulder with Lewis across the Edmund Pettus Bridge on "Bloody Sunday."

Williams played the role of enforcer in SCLC, always ready to deploy what he called his "arsenal of agitation." While his hard-charging tactics may have seemed out of step with the more diplomatic approach of other SCLC leaders, Rice suggests that it was precisely this contrast in styles that made the organization so successful. Rice also follows Williams's career after King's assassination, as Williams moved into local Atlanta politics. While his style made him loved by some and hated by others, readers will come to appreciate the central role that Williams played in the most successful nonviolent revolution in American history.


Rolundus Rice holds a PhD in history from Auburn University. He currently serves as vice president of academic affairs at Rust College in Mississippi.

"Hosea Williams is the definitive study of one of America's most gifted civil rights activists and political mavericks. Rice brilliantly traces the pioneering path of the talented movement strategist and protest provocateur—from his legendary association with Martin Luther King, Jr. and Jesse Jackson, to his transformative work for the poor, and his sublime agitation as a uniquely styled politician. Rice's pathbreaking book rightly establishes Hosea Williams as one of the most colorful and creative personalities to emerge in the pitched battle to make America a just nation."—Michael Eric Dyson, author of Entertaining Race: Performing Blackness in America

"The civil rights movement had an abundance of heroes and no shortage of villains. But the movement also had anti-heroes, prominent activists who lacked conventional heroic characteristics. As Rolundus Rice's deeply researched and wonderfully written biography of Hosea Williams makes clear, the movement's anti-heroes made seminal contributions to the struggle. In fact, by retrieving Williams from the margins of history, Rice demonstrates that the movement itself—its origins, evolution, and outcomes—cannot be fully understood without grappling with those movement leaders whose strategies and tactics defy easy categorization. Through Williams, Rice complicates civil rights leadership as well as the freedom struggle itself, fundamentally changing how we understand the most impactful social movement in American history."—Hasan Kwame Jeffries, author of Bloody Lowndes: Civil Rights and Black Power in Alabama's Black Belt

"Rice's biography of civil rights icon Hosea Williams reveals vividly the strategic effectiveness of militant agitation and nonviolent civil disobedience for the cause of freedom, justice and equality in America. I witnessed firsthand within the Southern Christian Leadership Conference (SCLC), the courage and the precision of Hosea Williams's frontline leadership and activism which this biography illuminates."—Benjamin F. Chavis, Jr., Executive Producer and Host of PBS' The Chavis Chronicles

"Hosea Williams offers a full, accessible, and clearly written account of was one of the most critical yet unknown figures in the modern civil rights movement. A welcome addition that offers a distinctive window onto the most important American social movement in the twentieth century."—James Ralph, author of Northern Protest: Martin Luther King, Jr., Chicago, and the Civil Rights Movement