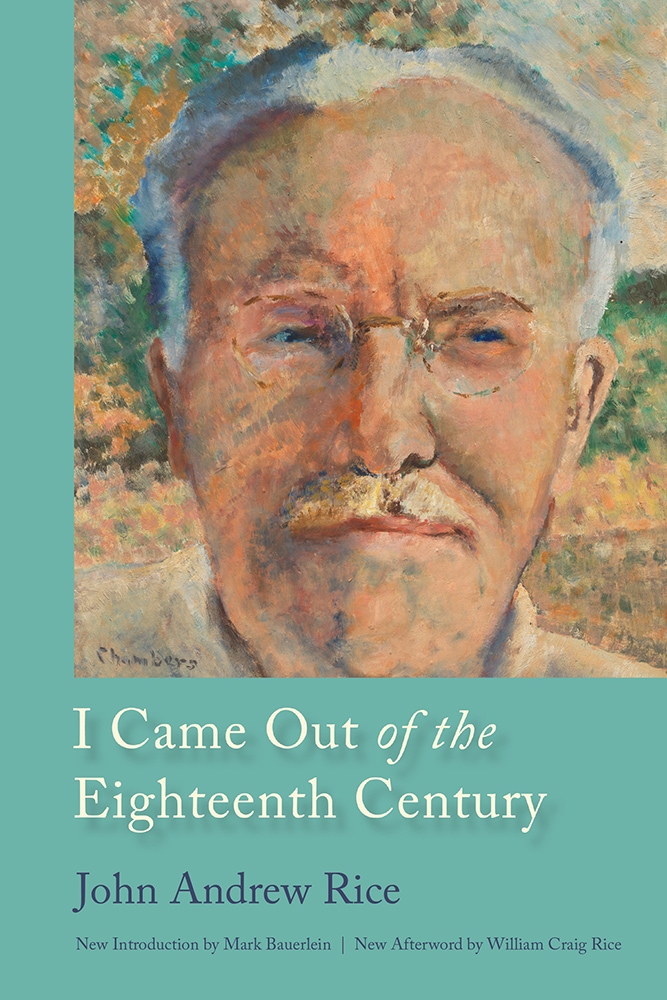 I Came Out of the Eighteenth Century

John Andrew Rice's autobiography, first published to critical acclaim in 1942, is a remarkable tour through late-nineteenth- and early-twentieth-century America. When the book was suppressed by the publisher soon after its appearance because of legal threats by a college president described in the book, the nation lost a rich first-person historical account of race and class relations during a critical period—not only during the days of Rice's youth, but at the dawn of the civil rights movement.

I Came Out of the Eighteenth Century begins with Rice's childhood on a South Carolina plantation during the post-Reconstruction era. Later Rice moved to Great Britain when he won a Rhodes scholarship, then to the University of Nebraska to accept a professorship. In 1933 he founded Black Mountain College, a legendary progressive college in North Carolina that uniquely combined creative arts, liberal education, self-government, and a work program.

Rice's observations of social and working conditions in the Jim Crow South, his chronicle of his own fading Southern aristocratic family, including its famous politicians, and his acerbic portraits of education bureaucrats are memorable and make this book a resource for scholars and a pleasure for lay readers. Historical facts are leavened with wit and insight; black-white relations are recounted with relentless and unsentimental discernment. Rice combines a sociologist's eye with a dramatist's flair in a unique voice.

This Southern Classics edition includes a new intro-duction by Mark Bauerlein and an afterword by Rice's grandson William Craig Rice, exposing a new generation of readers to Rice's incisive commentaries on the American South before the 1960s and to the work of a powerful prose stylist.


John Andrew Rice (1888–1968), born at Tanglewood Plantation near Lynchburg, South Carolina, was an early Rhodes scholar and the visionary founder of Black Mountain College, a progressive institution that attracted pioneering artists and intellectuals from Europe and United States from its opening in 1933 to its closing in 1957.

Mark Bauerlein is a professor of English at Emory University. He is the author and editor of ten books including Negrophobia: A Race Riot in Atlanta, 1906 and The Dumbest Generation: How the Digital Age Stupefies Young Americans and Jeopardizes Our Future. His essays and commentaries have appeared in Wall Street Journal, Washington Post, Yale Review, Partisan Review, and Chronicle of Higher Education.

William Craig Rice, director of Education Programs at the National Endowment for the Humanities, taught writing seminars for many years at Harvard University and later served as the twelfth president of Shimer College, the Great Books College of Chicago. He is the author of Public Discourse & Academic Inquiry and of essays, verse, and reviews in Common Review, New Criterion, Harvard Review, and other journals.