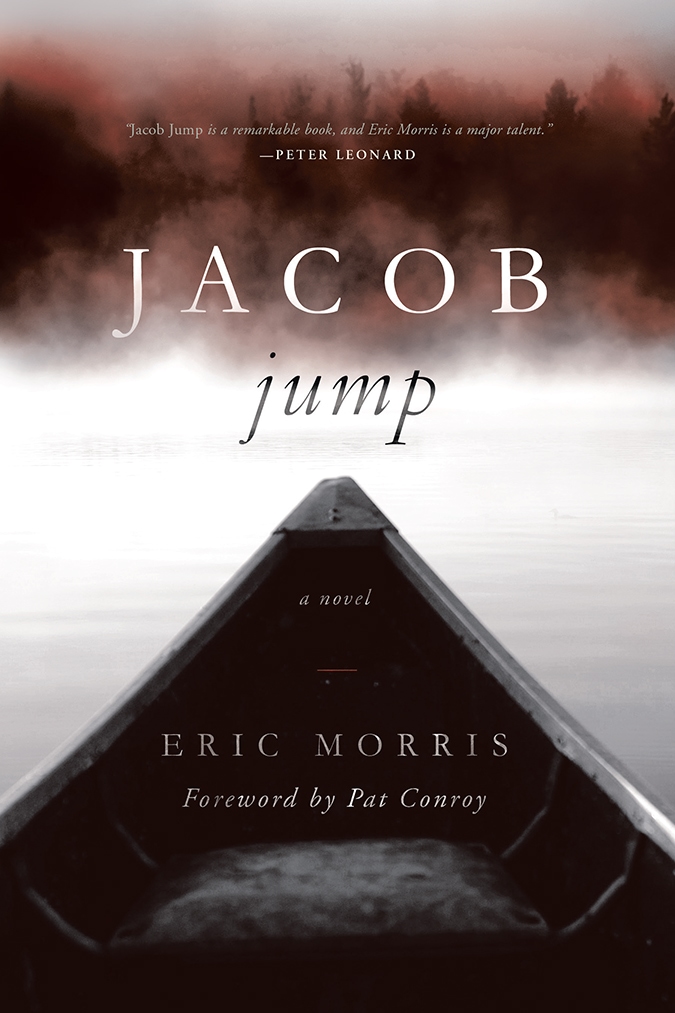 Jacob Jump, the dark and meticulously crafted first novel from Eric Morris, follows a weeklong ill-fated boating trip down the Savannah River from Augusta, Georgia, to the lighthouse at Tybee Island. Chance and danger trump planning and intention at every turn, and the pull of the historic river and of fate itself propels Morris's characters with unrelenting force.

Old friends Thomas Verdery and William Rhind, each seeking temporary escape from the failures of their lives, take to the river with Rhind's father. Verdery, a native southerner, has left his job and lover in Nepaug, Connecticut, while Rhind has lost his wife and child to his drinking. Encounters with dangerous weather and unhinged locals imperil the trio, who are held at gunpoint when they try to dock and soon are fighting among themselves. The hazards of the trip and a shocking loss along the way exacerbate William Rhind's drinking and tendencies toward violence. When Verdery and Rhind must become reluctant custodians to young Caron Lee, a lost girl from the backwoods family that had previously accosted them, tensions build toward explosive ends as the serene open waters of the Atlantic Ocean wait just beyond reach on the unknown, unknowable horizon.

Guided by a host of influences from William Faulkner and Ernest Hemingway to Cormac McCarthy, James Dickey, and Ron Rash, Morris's prose brings readers deep into the uncertainties of a still-wild southern landscape and of the frailties of the human heart yearning for past and future alike while pulled along by the inescapable current of the present.


A native of Augusta, Georgia, Eric Morris is a production designer for the stage and teaches at the University of South Carolina. Morris holds an M.F.A. from Western Illinois University and a B.A from Augusta College. His professional work includes productions for dance, theatre, opera, live music stages, and trade shows. Morris writes and records as one half of the musical duo Classes of Dynamo. He lives with his wife and son in Columbia, South Carolina.

"If Ernest Hemingway and Carson McCullers co-wrote a novel about a trip down the Savannah River that novel would be titled Jacob Jump. With dialogue as sharp and clear as water rolling over rocks and with familiar landscapes portrayed as starkly and as hauntingly as an alien world, Eric Morris shows that a trip down a river can be a trip through time to places where memory and regret lurk in closed-off spaces that are more perilous and unsettling than the deepest of waters on the blackest of nights."—Wiley Cash, author of This Dark Road to Mercy

"In his bold first novel Jacob Jump, Eric Morris takes full possession of the Savannah River. . . . [He] is a writer to be closely watched and his novel is as finely crafted as a Swiss timepiece. It has a perfection of design that is satisfying and a scope that is as ambitious as it is finely wrought."—Pat Conroy, from the foreword

"Eric Morris's Jacob Jump is half hallucinatory prose poem, half mythic journey, and, with every passing mile-marker, a work of gathering and genuine beauty. The journey down the Savannah River, rendered with such knowing precision, will surely bring to mind James Dickey's Deliverance, but the psychological nuances of this voyage put me more in mind of the work of the great Josephine Humphries. Jacob Jump is a work of art that also just happens to be an absolutely riveting read. It's a novel I won't soon forget."—Mark Powell, author of The Sheltering

"After reading Jacob Jump my first question was: how did this first-time novelist get so good? Jacob Jump is a remarkable book, and Eric Morris is a major talent. His storytelling is first-rate. His characters are dimensional and believable. And his ability to put you in a scene is extraordinary."—Peter Leonard, best-selling author of Voices of the Dead