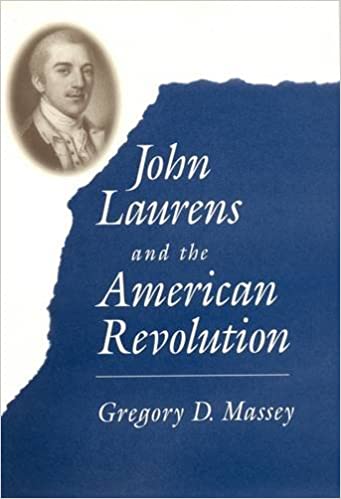 John Laurens and the American Revolution

Winning a reputation for reckless bravery in a succession of major battles and sieges, John Laurens distinguished himself as one of the most zealous, self-sacrificing participants in the American Revolution. A native of South Carolina and son of Henry Laurens, president of the Continental Congress, John devoted his life to securing American independence.In this comprehensive biography, Gregory D. Massey recounts the young Laurens's wartime record —a riveting tale in its own right —and finds that even more remarkable than his military escapades were his revolutionary ideas concerning the rights of African Americans.

Massey relates Laurens's desperation to fight for his country once revolution had begun. A law student in England, he joined the war effort in 1777, leaving behind his English wife and an unborn child he would never see. Massey tells of the young officer's devoted service as General George Washington's aide-de-camp, interaction with prominent military and political figures, and conspicuous military efforts at Brandywine, Germantown, Monmouth, Newport, Charleston, Savannah, and Yorktown. Massey also recounts Laurens's survival of four battle wounds and six months as a prisoner of war, his controversial diplomatic mission to France, and his close friendship with Alexander Hamilton. Laurens's death in a minor battle in August 1782 was a tragic loss for the new state and nation.

Unlike other prominent southerners, Laurens believed blacks shared a similar nature with whites, and he formulated a plan to free slaves in return for their service in the Continental Army. Massey explores the personal, social, and cultural factors that prompted Laurens to diverge so radically from his peers and to raise vital questions about the role African Americans would play in the new republic.


Gregory D. Massey is chair of the Department of History, Philosophy, and Political Studies and professor of history at Freed-Hardeman University in Henderson, Tennessee. A native of Wilmington, North Carolina, he holds a Ph.D. in history from the University of South Carolina in Columbia.

"But Massey's intimate familiarity with the life and exploits of John Laurens makes for a wonderful read, the style eminently accessible for the casual reader and academic historian alike."—Carolina Chronicles Magazine

"John Laurens, a colonel in the Continental Army during the American Revolution, has long deserved a comprehensive and complete biography. Massey's book superbly meets that need Massey's book is unusually well-written, based on sound research in all relevant archival collections, and places Laurens squarely within the context of his times."—Choice

"This excellent biography . . . stands as the first reliable, comprehensive treatment of the life and times of John Laurens . . . Engaging, richly contextualized study. . . Laurens—ever solicitous of public honor and posthumous fame—never wavered from his commitment to the revolutionary cause. In this perceptive and balanced biography, Gregory Massey does him justice."—Georgia Historical Quarterly

"Massey has written an admirable book that places two men who thought differently from the majority in their day squarely in the context of their time."—Journal of American History

"In this insightful and balanced study of an important Revolutionary figure, [Massey] has provided the public with an intriguing account, not only of the Laurens family in particular but, equally important, of the extraordinarily complex relationships generated by the colonial breach with the Mother Country."—North Carolina Historical Review

"This book admirably fulfills the need for a scholarly biography of John Laurens . . . A rewarding read."—Virginia Quarterly Review

"An excellent biography for the general reader."—Journal of Military History

"An excellent contribution to understanding the pre-Revolutionary and Revolutionary periods in South Carolina and America."—Southern Historian

"Thorough and scholarly yet accessible for a general readership curious about a figure whose role in most books has been somewhat shadowy."—The State

". . . a worthy biography in history of the American Revolutionary War."—McCormick Messenger