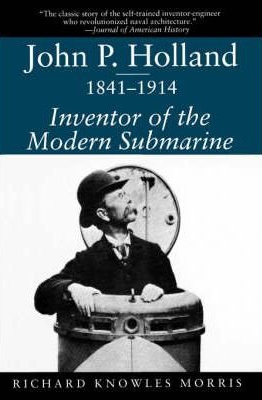 Inventor of the Modern Submarine

The standard biography of the man who pioneered the modern submarine

A classic of maritime history updated with new information, John P. Holland, 1841-1914 is the sole full-length biography of the man whose technological innovations led to the launching of the first modern submarine in May 1897. While David Bushnell may be considered the father of the submarine, Holland devised the technical improvements that enabled a craft to operate equally effectively whether submerged or surfaced, and it was his design that the U.S. Navy purchased in 1900. Richard Knowles Morris draws on diaries and papers left by his grandfather, a longtime friend of Holland and an superintending engineer of the Holland Torpedo Boat Company (later Electric Boat), to trace the inventor's eventful life. Morris recounts Holland's early years, his frustration in dealing with the Fenians and the U.S. Navy, and his company's negotiations with Japan, Great Britain, and Russia for Holland boats. Of particular interest is the selection of photographs that offer an enlightening pictorial of early submarine history.

Richard Knowles Morris is a retired professor of education and anthropology at Trinity College in Hartford, Connecticut. Morris is the author, co-author, or editor of several books and numerous articles in leading journals.

"The classic story of the self-trained inventor-engineer who revolutionized naval architecture."—Journal of American History

"This is a sound work in a highly controversial field, and can be read by naval buffs or history students with equal profit and pleasure."—Choice

"Certain to be the standard biography of Holland."—The Irish Sword

"By far the best of its kind."—Submarines

"[The book's] virtues are many: felicitous coverage of Holland's childhood, youth, and career in Ireland; fascinating material on the activities of the Fenian Society; the agonies of obtaining a government contract; and the history of the Electric Boat Company This is the definitive work on Holland and is considerably more than naval and submarine history."—Library Journal