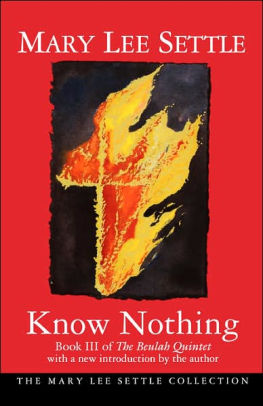 Book III of The Beulah Quintet

Set in the decades preceding the Civil War, Know Nothing tells the tragic tale of Peregrine Catlett and his second son, Johnny. The year 1837 brings a host of perils to their verdant West Virginia valley. Amid financial panic, debate over the abolition of slavery, and mounting tension between North and South, Peregrine considers freeing his slaves but believes that, with his children scattered, his only hope of retaining his plantation rests on the use of slave labor.

Johnny returns to this father's farm but stays only until the outbreak of hostilities. He soon loses sight of his reasons for joining the Confederate forces and ends up fighting both family and friends with disastrous results.


Mary Lee Settle was born in Charleston, West Virginia, and has lived in England, Turkey, and New York. Her novel Blood Tie won the National Book Award and her novel Choices received the Lillian Smith Award for fiction. Settle's other works include the novels Charley Bland, Celebration, The Clam Shell, The Love Eaters, The Kiss of Kin and a memoir, All the Brave Promises. Settle now lives in Charlottesville, Virginia.