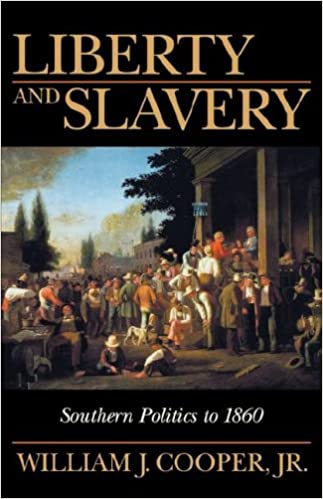 The recipient of high praise—and considerable debate for its provocative thesis—William J. Cooper, Jr.'s sweeping survey of antebellum southern politics returns to print for classroom and general use with this new paperback volume. In Liberty and Slavery Cooper contends that southerners defined their notions of liberty in terms of its opposite—slavery. He suggests that a jealous guardianship of the peculiar institution unified white southerners of differing economic, social, and religious standing and grounded their debates on nationalism and sectionalism, agriculture and manufacturing, territorial expansion and Western settlement. Cooper assesses how the South's devotion to liberty shaped its response to major legislation, judicial decisions, and military actions, and how abolitionism, in the eyes of white southerners, threatened the destruction of local control and the death of liberty.

William J. Cooper, Jr., is Boyd Professor of History at Louisiana State University, where he has taught since 1968. He is the author of Jefferson Davis, American; The South and the Politics of Slavery, 1828–1856; and The Conservative Regime: South Carolina, 1877–1890 and coauthor of The American South: A History. Cooper also has edited three books, including Writing the Civil War: The Quest to Understand. Cooper lives in Baton Rouge, Louisiana.

"Henceforth, anyone seeking guidance through the thickets of antebellum southern politics will turn to Liberty and Slavery."—Reviews in American History

"Superior to most political surveys. And because the thesis is one that serious students of southern history must reckon with, Cooper's book itself stands as an important work in southern history."—Journal of Southern History