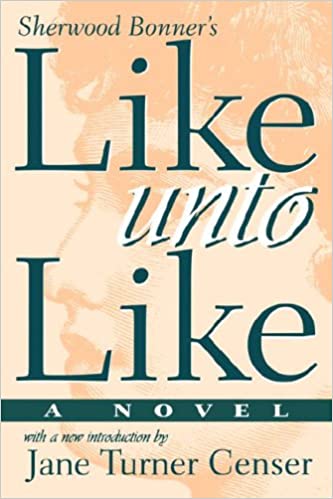 Originally published in 1878 after Henry Wadsworth Longfellow recommended it to Harper and Brothers, Like Unto Like marks the emergence of a feminist critique of southern society a full generation before Ellen Glasgow and Kate Chopin published their well-known works. The novel follows a romance between a free-spirited, intellectual southerner, Blythe Herndon, and a former abolitionist and Union soldier, Roger Ellis. Seeing marriage to an outsider as an escape from the strictures of southern society, Blythe soon realizes that even Roger will expect deference from his wife. She acknowledges her inability, despite a desire to be free from convention, to accept Roger's egalitarian views on race relations, his notions of free love, and his past affair with a married woman.

In addition to warning female readers of the potential dangers of marriage, Bonner recognizes the importance of race in southern attitudes and breaks new ground in creating a range of African American characters. Jane Turner Censer's new introduction accords Bonner the long-delayed literary recognition she deserves.


Sherwood Bonner (1849–1882) was born in Holly Springs, Mississippi. She published stories in such widely read magazines as Youth's Companion, Lippincott's, and Harper's Monthly and was a correspondent for the Memphis Avalanche and the Boston Times.

Jane Turner Censer is a professor of history at George Mason University in Fairfax, Virginia. Author of North Carolina Planters and Their Children, 1800–1860, she was an editor of the highly acclaimed Papers of Frederick Law Olmstead.