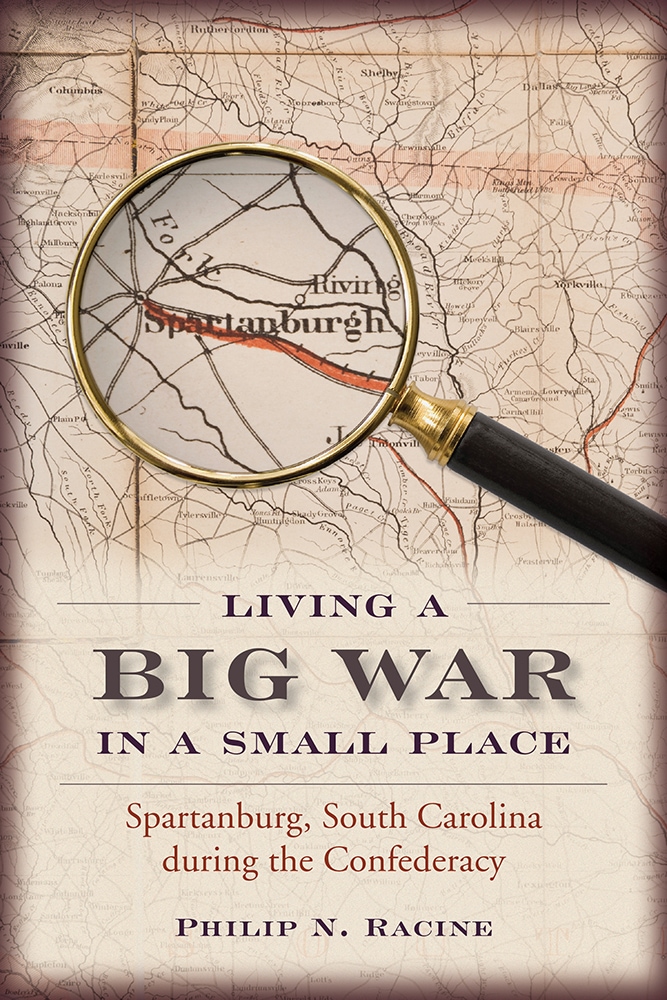 Living a Big War in a Small Place

Spartanburg, South Carolina, during the Confederacy

Most of what we know about how the Civil War affected life in the Confederacy is related to cities, troop movements, battles, and prominent political, economic, or military leaders. Far less is known about the people who lived in small Southern towns remote from marching armies or battles. Philip N. Racine explores life in one such place—Spartanburg, South Carolina—in an effort to reshape the contours of that great conflict.

By 1864 life in most of the Confederacy, but especially in rural towns, was characterized by scarcity, high prices, uncertainty, fear, and bad-tempered neighbors. Shortages of food were common. People lived with constant anxiety that a soldiering father or son would be killed or wounded. Taxes were high, inflation was rampant, good news was scarce and seemed to always be followed by bad. The slave population was growing restive as their masters' bad news was their good news. Army deserters were threatening lawlessness; accusations and vindictiveness colored the atmosphere and added to the anxiety, fear, and feeling of helplessness. Often people blamed their troubles on the Confederate government in faraway Richmond, Virginia.

Racine provides insight into these events through personal stories: the plight of a slave; the struggles of a war widow managing her husband's farm, ten slaves, and seven children; and the trauma of a lowcountry refugee's having to forfeit a wealthy, aristocratic way of life and being thrust into relative poverty and an alien social world. All were part of the complexity of wartime Spartanburg District.


Philip N. Racine is the William R. Kenan, Jr., Professor of History Emeritus at Wofford College in Spartanburg, South Carolina. He is the editor of The Fiery Trail: A Union Officer's Account of Sherman's Last Campaign, Piedmont Farmer: The Journals of David Golightly Harris, 1855–1870, and Gentlemen Merchants: A Charleston Family's Odyssey, 1828–1870, and author of Seeing Spartanburg: A History in Images.

"Racine's work is a helpful addition to the growing number of studies of the Civil War at the micro level. It is also a useful pedagogical tool, as Racine deliberately uses his book as a treatment of the strengths and pitfalls of working with primary sources."—Paul Yandle, North Greenville University, West Virginia History

"Racine has made excellent use of his knowledge of this locale. He skillfully demonstrates how the experiences of one, small place can reflect the larger themes of a very big war."—Jacqueline Glass Campbell, Civil War Monitor

"Living a Big War in a Small Place is a well-written account that not only captures the plight of both the black and white population, but also offers some amazing cameos, especially the life of Emily Lyle Harris, who struggled to keep her large family in tact while her husband went off to war. This is a lively read and a perfect book to assign for classes covering the Carolina Upstate during the American Civil War."—Edmund L. Drago, professor of history, The College of Charleston, and author of Confederate Phoenix: Rebel Children and Their Families in South Carolina

"Living a Big War offers a fascinating, unflinching look at the toll the Civil War took on Spartanburg, clearly showing divisions that emerged and deftly employing stories of slaves, women, and other individuals to reveal the experiences of people on the home front."—Gaines M. Foster, dean, College of Humanities and Social Sciences, Louisiana State University, and author of Ghosts of the Confederacy: Defeat, the Lost Cause and the Emergence of the New South, 1865-1913