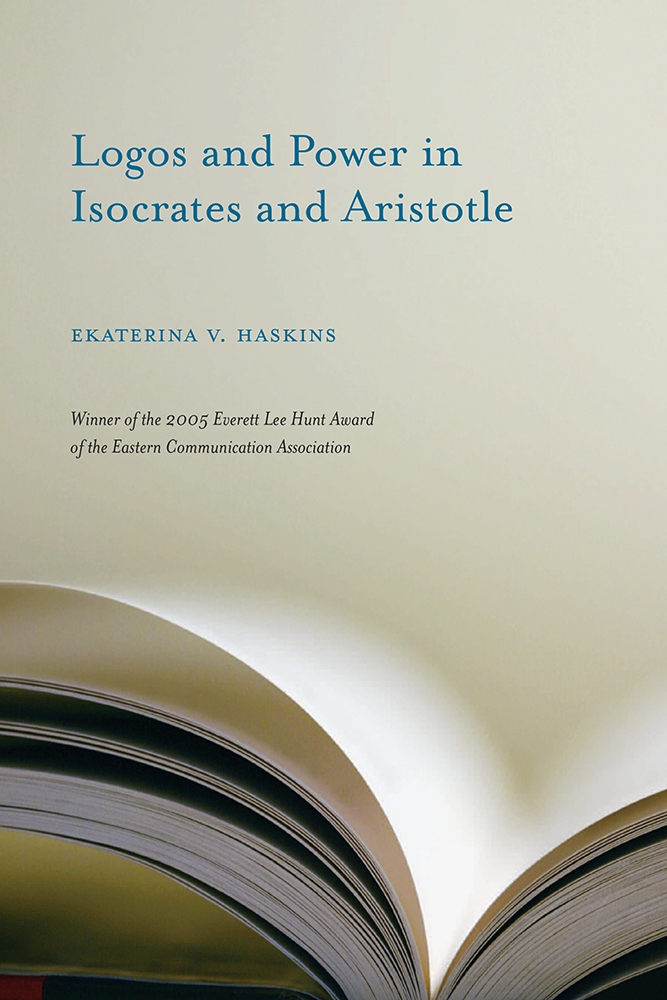 Logos and Power in Isocrates and Aristotle

A provocative reconsideration of two competing classical approaches to discourse, politics, and education

As one of the founding philosophers of the Western tradition, Aristotle raised many of the issues that still animate scholarly debates in the humanities. By contrast Isocrates, despite his considerable reputation in antiquity and the Renaissance as an educator, became a marginal figure in the intellectual history of the West. Logos and Power in Isocrates and Aristotle presents Isocrates' vision of discourse as a worthy rival, rather than a mere precursor, of Aristotle's Rhetoric. Casting Isocrates and Aristotle as opponents in a debate over the character, resources, and ends of rhetorical education, Ekaterina V. Haskins argues that much of what Aristotle had to say about the status of rhetoric and the role of discourse in the life of a Greek city-state may have been an implicit reaction to Isocrates. Haskins finds that Isocrates offers a more comprehensive and culturally attuned theory of civic discourse and education than does Aristotle, whose intellectual project disengages moral philosophy from the contingencies of public culture and introduces rhetoric merely as an art serviceable to a philosophically trained statesman. Haskins terms Isocrates' approach to discourse "constitutive" and Aristotle's "instrumental" and shows how the former is more congenial to the goals of contemporary rhetorical theory and pedagogy.

Ekaterina V. Haskins is an associate professor in the Department of Language, Literature, and Communication at Rensselaer Polytechnic Institute in Troy, New York. Her research on classical and contemporary rhetoric has appeared in the Quarterly Journal of Speech, the Rhetoric Society Quarterly, the Journal of Communication Inquiry, Philosophy and Rhetoric, History and Memory, Space and Culture, and in a number of edited collections.

"Against a background of neglect and misconception, Haskins clarifies and complicates Isocrates' legacy to Western culture: clarifies by describing what it was and what it still can be; complicates by asking us to consider previously unexamined issues. In particular, she focuses attention on such important concerns as performance, agency, and the methods we use to study them. . . . Following Isocrates, Haskins reminds us that we must practice what we preach by studying the history of rhetoric holistically—that is, in integrative and intertextual ways, and as part of ongoing academic debates, which inform civic and educational practices."—Rhetorical Review

"The main strength of Haskins' argument is her resurrection of Isocratean rhetoric from the shadow of Aristotle's codified dominance. Haskins provides considerable evidence for rethinking the importance of Isocrates' understanding of rhetoric."—Polis: The Journal of the Society for Greek Political Thought

"Haskins' elegant and original book will reward readers with insight into the relation between Isocrates and Aristotle, and into the political and pedagogical implications of their positions. It is a great step forward for the Isocratean revival."—Rhetoric Society Quarterly