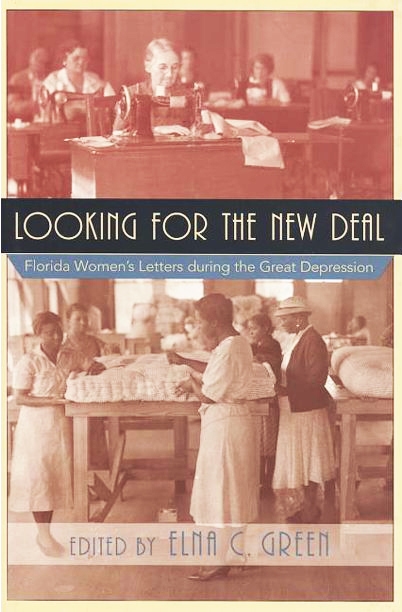 Looking for the New Deal

Rife with palpable misery and often pleading with desperate urgency, the hundreds of letters assembled in Looking for the New Deal paint a bleak and accurate portrait of the female experience among Floridians during the Great Depression.

Searching for help at a time when desperation overwhelmed America, women in Florida shared the same goal as their counterparts elsewhere in the country—they wanted work. In pursuit of a means to provide for their families, these women doggedly, often naively, wrote letters asking for relief assistance.from agencies, charities, and state and federal government officials. In this volume Elna C. Green gathers more than three hundred letters written by Floridians that reveal the immediacy and intensity of their plight. The voices of women from all walks of life—black and white, rural and urban, old and young, historically poor and newly impoverished—testify to the determination and ingenuity of a generation facing trying times.

Green uses census records to set the letter writers in a demographic context and to explain that many of the hardships faced by these Floridians, such as unemployment, mortgage foreclosures, missing spouses, and unsympathetic social workers, were identical to those of women throughout the country. The struggles detailed here, however, reflect the Depression's extraordinarily devastating impact in Florida, where it followed on the heels of massive hurricanes, a medfly epidemic, and a land bust of monumental dimension.

Noting that only recently have scholars of the New Deal begun to consider the distinctive experiences of women during the 1930s, Green underscores the window for study opened by this collection. Corroborating the notion that poverty and its relief are highly gendered phenomena, these primary source materials record cries for help—sometimes deferential, sometimes insistent—and the often gender-specific solutions that the correspondents encountered. Views about charity and the state emerge from the letters, as well as the reality that social welfare has always been a process of constant negotiation, with people shuttling from one organization to another in search of assistance.


Elna C. Green is the Allen Morris Professor of History at Florida State University in Tallahassee. Originally from North Carolina, she is a graduate of Wake Forest and Tulane Universities. Her previous books include This Business of Relief: Confronting Poverty in a Southern City, 1740–1940 and Southern Strategies: Southern Women and the Woman Suffrage Question.

"In Looking for the New Deal, Elna Green has unearthed a treasure trove of letters helping us better understand Florida and the tumultuous decade of the 1930s. In shades of pathos and comedy, hope and desperation, the letters document a state and society almost unrecognizable today. Readers learn about the lives and loves of mothers with blind and crippled children, daughters of destitute Confederate veterans, and wives and widowers of bootleggers and unemployed cigar makers."—Gary R. Mormino, Frank E. Duckwall Professor of Florida Studies, University of South Florida, St. Petersburg

"Elna Green's fine collection of Florida women's depression-era letters makes for poignant reading. These letters reveal the great trust that the state's citizens placed in their elected officials, the unique hardships that Floridians faced, and especially the ways that women's experience of the Great Depression differed from that of men. Green's book is an important contribution to our efforts to understand how ordinary Americans understood both the economic crisis and the New Deal programs that sought to address it."—Melissa Walker, Converse College, author of All We Knew Was to Farm: Rural Women in the Upcountry South, 1919–1941 and editor of Country Women Cope With Hard Times: A Collection of Oral Histories