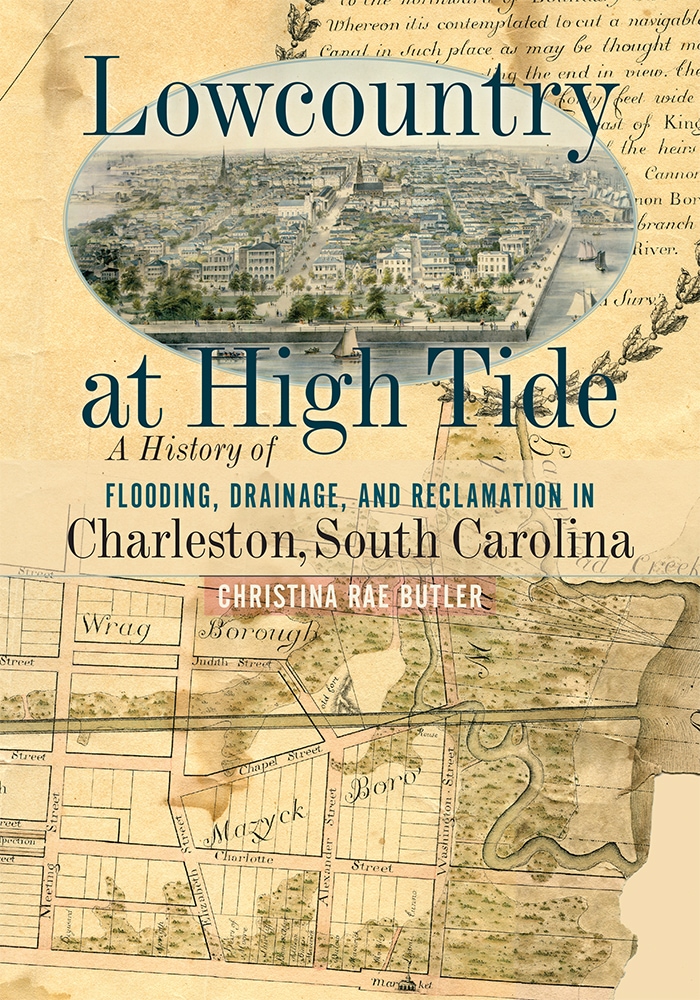 A History of Flooding, Drainage, and Reclamation in Charleston, South Carolina

The signs are there: our coastal cities are increasingly susceptible to flooding as the climate changes. Charleston, South Carolina, is no exception, and is one of the American cities most vulnerable to rising sea levels. Lowcountry at High Tide is the first book to deal with the topographic evolution of Charleston, its history of flooding from the seventeenth century to the present, and the efforts made to keep its populace high and dry, as well as safe and healthy.

For centuries residents have made many attempts, both public and private, to manipulate the landscape of the low-lying peninsula on which Charleston sits, surrounded by wetlands, to maximize drainage, and thus buildable land and to facilitate sanitation. Christina Butler uses three hundred years of archival records to show not only the alterations to the landscape past and present, but also the impact those efforts have had on the residents at various socio-economic levels throughout its history.

Wide-ranging and thorough, Lowcountry at High Tide goes beyond the documentation of reclamation and filling and offers a look into the life and the history of Charleston and how its people have been affected by its unique environment, as well as examining the responses of the city over time to the needs of the populace. Butler considers interdisciplinary topics from engineering to public health, infrastructure to class struggle, and urban planning to civic responsibility in a study that is not only invaluable to the people of Charleston, but for any coastal city grappling with environmental change.

Illustrated with historical maps, plats, and photographs and organized chronologically and thematically within chapters, Lowcountry at High Tide offers a unique look at how Charleston has kept—and may continue to keep—the ocean at bay.

Christina R. Butler is a professor at the American College of the Building Arts, an adjunct professor at the College of Charleston, and owner of Butler Preservation L.C., which specializes in historic property research. She is the author of Ansonborough: From Birth to Rebirth and several National Register listings. Butler has a B.A. in historic preservation and an M.A. in history from the College of Charleston/Citadel joint program.

"Lowcountry at High Tide is a much-needed study of landmaking in Charleston that also includes the related topics of drainage and filling existing land. Using public records, Christina Butler has traced Charlestonians's efforts to create raised, dry - and healthy, attractive, economically viable - land from their original low, inlet-laced peninsula."—Nancy Seasholes, author of Gaining Ground: A History of Landmaking in Boston

"Christina Butler describes a growing but low-lying city where the ground surface was constantly in flux. The filling and draining that characterized Charleston from its earliest days had both short-term and long-range consequences for the livability of the peninsula, and for the archaeological record of these processes. Some may surprise you."—Martha Zierden, The Charleston Museum