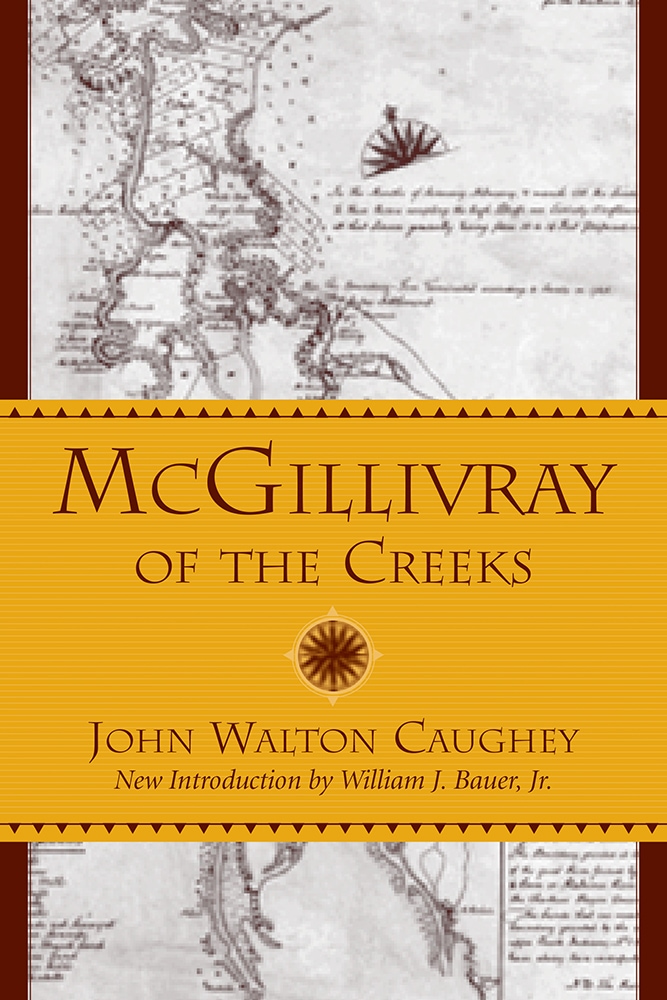 McGillivray of the Creeks

An Indian perspective into native and Euroamerican diplomacy in the South

First published in 1939, McGillivray of the Creeks is a unique mix of primary and secondary sources for the study of American Indian history in the Southeast. The historian John Walton Caughey's brief but definitive biography of Creek leader Alexander McGillivray (1750-1793) is coupled with 214 letters between McGillivray and Spanish and American political officials. The volume offers distinctive firsthand insights into Creek and Euroamerican diplomacy in Georgia, Alabama, and Mississippi in the aftermath of the American Revolution as well as a glimpse into how historians have viewed the controversial Creek leader.

McGillivray, the son of a famous Scottish Indian trader and a Muskogee Creek woman, was educated in Charleston, South Carolina, and, with his father's guidance, took up the mantle of negotiator for the Creek people during and after the Revolution. While much of eighteenth-century American Indian history relies on accounts written by non-Indians, the letters reprinted in this volume provide a valuable Indian perspective into Creek diplomatic negotiations with the Americans and the Spanish in the American South. Crafty and literate, McGillivray's letters reveal his willingness to play American and Spanish interests against one another. Whether he was motivated solely by a devotion to his native people or by the advancement of his own ambitions is the subject of much historical debate.

In the new introduction to this Southern Classic edition, William J. Bauer, Jr., places Caughey's life into its historiographical context and surveys the various interpretations of the enigmatic McGillivray that historians have drawn from this material.


A former president of the Organization of American Historians, John Walton Caughey (1902–1995) was a professor of history at the University of California, Los Angeles, and the author of eighteen works on American and American Indian history.

William J. Bauer, Jr., is an assistant professor of history at the University of Wyoming. His research interests include American Indian ethnohistory, labor, and California Indians.

"In this new edition, William J. Bauer Jr. updates Caughey's biography by contextualizing McGillivray's life in the current historiography of the eighteenth-century Creek Indians. The book contains mostly McGillivray's correspondence that concerns his negotiations between the United States, Britain, and Spain in regard to Creek political and economic affairs. Although McGillivray figures in virtually every book written about the Creeks and has been the subject of numerous articles, Caughey's biography is still the only one written about him to date."—H-Net Reviews