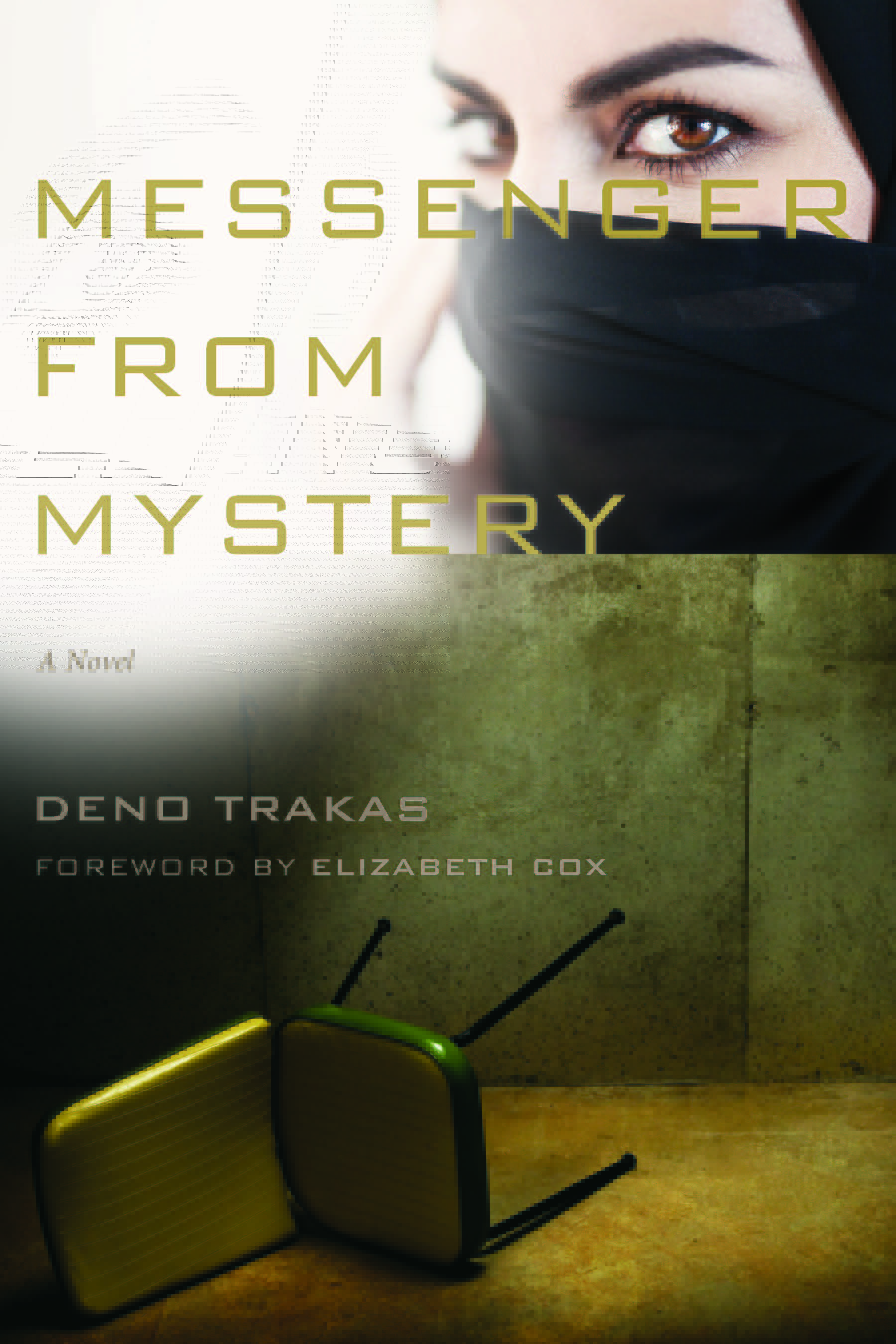 Young and in love, an American student becomes entangled in the Iranian hostage crisis in this literary thriller

Deno Trakas's novel Messenger from Mystery features English graduate student Jason "Jay" Nichols, a third-generation Greek American who claims to be named after the heroic Argonaut leader despite an introspective and self-absorbed nature. On the cusp of his transition into adulthood and from student to teacher, Jay still lives primarily in his own thoughts and studies. Having been an activist in college, he considers himself knowledgeable about local and global politics, but when the Iranian hostage crisis begins while he is teaching students from Iran, he realizes that his understanding of geopolitical conflict is naive and superficial. Jay becomes infatuated with one of his students, Azadeh "Azi" Ghotbzadeh, whose cousin is the foreign minister of Iran and wants to work with the United States to resolve the crisis, which makes Azi vulnerable to manipulation and other threats. Her family insists that she return to Iran at the end of the semester, but before she goes, she spends a week with Jay, and they fall in love. When Azi leaves, Jay is crushed.

When Hamilton Jordan, one of President Jimmy Carter's closest aides, learns that his college friend Jay has a close relationship with a woman with access to the inner circles of the Ayatollah, Jordan enlists Jay's help. At first Jay is a simple intermediary, but when his mission goes terribly wrong and Azi is put in mortal peril, Jay finds himself in the unlikely and uncomfortable role of rescuer. Aided by a CIA operative and Jay's literary hero, he travels to Iran to free Azi from her captors.

Like the award-winning film Argo, Messenger from Mystery harks back to the difficult final years of the Carter administration and looks closely at the hostage crisis, which captured the attention of the world for 444 days, garnered its own news show, ensured the defeat of Carter and the victory of Reagan, and frayed any American confidence regained after Vietnam and Watergate. A story of love, politics, terrorism, and heroism, Messenger from Mystery mixes accurate, fascinating history with convincing, engaging imagination. Trakas's novel depicts the human heart in conflict with itself as well as a subtle, thoughtfully rendered critique of U.S.-Middle East relations of the era, still relevant today.


Deno Trakas is the Laura and Winston Hoy Professor of English and director of the writing center at Wofford College in Spartanburg, South Carolina. He has published fiction and poetry in journals and anthologies, two chapbooks of poems, and a memoir entitled Because Memory Isn't Eternal: A Story of Greeks in Upstate South Carolina. Trakas is a five-time winner of the South Carolina Fiction Project Prize and a recipient of the South Carolina Academy of Authors Fellowship in Fiction. Messenger from Mystery is his first novel.

"Messenger from Mystery is a taut page-turner about love and death on the dark side of international education. The forbidden affair of an American professor and his sultry Iranian student, the Hitchcockian suspense of men and women on the run for their lives in the world's most dangerous places, and a cast of supporting players that throbs with life—Deno Trakas delivers all of these in words that sing. A remarkably accomplished debut novel and surely one that Hollywood will hurry to capture."—Sterling Watson, author of Suitcase City and Fighting in the Shade

"Set against the backdrop of South Carolina and Iran, Messenger from Mystery is equal parts coming of age tale, love story, and international thriller. Deno Trakas has crafted a power narrative, one that is incredibly relevant in today's world."—James M. Scott, Pulitzer Prize finalist for Target Tokyo: Jimmy Doolittle and the Raid That Avenged Pearl Harbor

"In Messenger from Mystery, Deno Trakas seamlessly fuses the personal to the political, and the result is a story that probes the possibility of individual goodness surviving despite two countries' discord. This novel is an outstanding debut by a very talented writer."—Ron Rash, author of Above the Waterfall

"Trakas shows a talent for enlarging his focus and sustaining the keen interest of his readers in a richly honed cast of characters and a complex narrative unfolding against an historical event: the capture of Americans as Iranian hostages in the 1980s. A clash of cultures, the pull and push of personal relationships, and rising senses of duty and forgiveness create the driving force of this novel, but at its beautiful beating heart, this is a profound love story"—Elizabeth Cox, from the foreword

"Messenger from Mystery couldn't be more timely in our age of terrorism, both domestic and foreign. This riveting and thoughtful book is equal parts love story, history lesson, and international spy thriller—and the whole of it provided me with a story I couldn't put down. Thank you, Deno Trakas, for such a fine novel!"—Bret Lott, College of Charleston